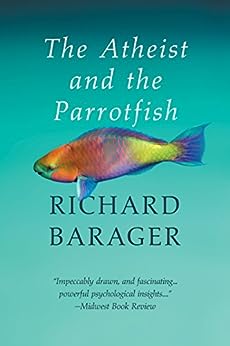 The Atheist and the Parrotfish Kindle Edition

A transplant patient possesses eerie knowledge of his organ donor’s most intimate secret. This could change everything.

Nephrologist Cullen Brodie’s disbelief in the afterlife is tested when a cross-dressing transplant patient exhibits behaviors and traits of his female organ donor—details about whom the patient inexplicably knows. The patient’s eerie knowledge of his donor’s greatest secret forces Cullen to consider the unimaginable: transmigration of a human soul.

Midwest Book Review: "As events spiral beyond [the characters'] control, readers are introduced to a questioning process that challenges them to consider the disparate paths of personal change and the possibilities of medical and religious realms intersecting in unusual ways. All these facets, especially the winding commentary on transgender identity and evidence of a soul, could easily have become confusing, especially when given an added shot of intrigue and the elements of a medical mystery; but under Barager's pen the logic of events and the evolution of personalities and new beliefs are impeccably drawn, and fascinating."

EVOLVED PUBLISHING PRESENTS a fascinating glimpse into a world where medicine and religion/philosophy intersect, in a literary novel sure to fascinate, and quite possibly to entice you to examine your own beliefs. [DRM-Free]

AUTHOR: By day I'm a nephrologist, treating dialysis patients and kidney transplant recipients. By night I write fiction. I believe the two finest callings in life are doctor and writer, one ministering to the human condition, the other illuminating it, and each capable of transforming it. I earned BA and MD degrees at the University of Minnesota and did my postgraduate training at Emory University in Atlanta and the University of California in San Diego. I live now in Orange County, CA. I am a champion of the healing power of literature, and sometimes prescribe novels or short stories to patients to help them cope with illness. Fiction explores meaning in a way science cannot. Sometimes only fiction tells the truth.

EDITOR: As an editor, I appreciate stories with pace and humor-and no dangling participles. Genres of particular interest include nature writing, creative nonfiction, speculative fiction, and books for children & young adults. I earned my MFA from Vermont College of Fine Arts, and I teach at New Hampshire Institute of Art. --This text refers to the paperback edition.

By day, I'm a nephrologist, treating dialysis patients and kidney transplant recipients. By night, I write fiction. I believe the two finest callings in life are doctor and writer, one ministering to the human condition, the other illuminating it, each capable of transforming it.

I am a champion of the healing power of literature. Fiction explores meaning in a way science cannot. Sometimes only fiction tells the truth.

3.6 out of 5 stars
3.6 out of 5
22 global ratings
How are ratings calculated?
To calculate the overall star rating and percentage breakdown by star, we don’t use a simple average. Instead, our system considers things like how recent a review is and if the reviewer bought the item on Amazon. It also analyses reviews to verify trustworthiness.

Snapdragon
TOP 50 REVIEWER
4.0 out of 5 stars Interesting
Reviewed in Australia on 24 June 2018
Verified Purchase
This book was written by a kidney specialist with a very large vocabulary. Isn’t it fortunate that we can tap on a word to find out what it means! The central story concerns a cross dressing 63 year old man who receives a heart/kidney transplant. He becomes convinced that he’s also received a part of his donor’s soul. He certainly seems to know things about her that he shouldn’t: her love of jazz and beetroot, for example. Naturally his shrink disagrees, preferring the explanation that he needs to come to terms with his female alter ego.

His nephrologist Cullen Brodie is the main protagonist though, and through him other themes are explored. A dedicated rationalist, Brodie is very anti-religion. His Catholic father was very opposed to abortion and when a young Cullen reveals that his girlfriend is the daughter of a well known abortionist Brodie senior slashes her painting, setting off a Greek tragedy of events that scar not only Cullen and girlfriend Angie but many others. Years later, with two divorces behind him, Cullen finds himself wishing that he had descendants, and sizing up his heart/kidney patient’s shrink as breeding material. However, when a painting from the Cook Islands arrives, he drops everything to go there and re-connect with its painter - Angie. Things go well till she drops a bombshell. Or two.

Life on the Edenic islands is well-described. The author must be one of those polymaths who collect all sorts of information like a sponge. Naturally, as a doctor himself, everything medical is also well-described. Back home in California a thorny problem of parentage that involves Cullen’s boss and his heart/kidney patient sees Cullen wrestling with the faith question and reversing his point of view. So the book is interesting intellectually and narratively, and the characters are well drawn. It’s well worth reading. I’m not convinced of Cullen’s conclusion though, and I think some of the obscure words could go.
Read more
Helpful
Report abuse

Louisa
5.0 out of 5 stars Brilliant
Reviewed in Australia on 18 March 2018
This is definitely the kind of story that will divide its readers; you'll love it or hate it. Clearly, I loved it. I found it incredibly thought-provoking, frustrating, and beautifully balanced on that line between exploring belief systems and preaching one over another. I tend to steer clear of religious debate/agendas in novels-this one was excellent. I also tend to find many books that have minority groups represented by one main character are overdone: I would hazard a guess that the trans community would not be offended or feel mis-represented by this one. I think the author has done a brilliant job weaving in his day-time profession in with a lot of thorough research. This is a very well written, artfully considered and brilliantly executed slight off-kilter story that had me entranced from the first chapter. I will say, the ending left me reeling! Not at all what I expected, and nicely done for catching me off guard!
Read more
2 people found this helpful
Helpful
Report abuse
See all reviews

Patrician
2.0 out of 5 stars Didactic, Overwritten & Overambitious.
Reviewed in the United Kingdom on 28 April 2018
Verified Purchase
This book aims high, aspiring to demonstrate great truths about the human condition where science & rationality vie with religious belief & spirituality. The atheist of the title is Dr Cullen Brodie, a highly respected nephrologist (kidney specialist), who however carries a burden of guilt for an undisclosed incident in the past. This has left him with a bitter hatred of religion, & a conviction that a benevolent God would not allow such things, & therefore cannot exist. Ennis, one of Dr Brodie’s patients, is a transvestite who undergoes a heart & kidney transplant successfully, but subsequently feels he has an affinity with the soul of the donor, Carla. She was a young woman killed in an accident, whose husband & father -in -law are also medical men, the latter being CEO of the hospital & nephrology unit. These are the basic elements from which the plot is developed.
Both male & female at once, the parrotfish of the title refers partly to Ennis, but also seems to represent for the author some kind of symbolic truth about God. ..”but a parrotfish, the Christian paradox of Ennis, both male & female, the most beautiful fish in the lagoon.” This has to do with the god-given duality of things & of God himself, as Barager sees it.
For me, it represents one of the major faults of the book, which is the fudging necessary to evoke a sheen of religiosity over the proceedings. One theme that recurs is the (supposed) way in which art - painting, poetry - can point to an ineffable truth, a truth beyond words or reason. Barager is trying to emulate that through his book, to write a parable of ignorance transformed to enlightenment in God. But such didacticism goes contrary to art, because the feelings inspired by art are nebulous in form, not tied to a particular goal.
Similarly, a great deal of sentimental suspension of disbelief is necessary to bring about the kind of ending the author wants, after the various trials & tribulations of the plot.
Also fudged is one of the central planks of the book, the question of Carla’s soul communing with Ennis. While any rational person would be sceptical of this belief, Ennis reveals certain facts that he could only have learnt from Carla, post-mortem . The important point here is that his revelations of this knowledge are necessary to move the plot along, yet later this is placed in brackets, so to speak : “Ennis’s eerie unmasking of MacGregor aside, Cullen did not believe that transplanted organs had the capacity to drag their donor’s souls into unsuspecting recipients.” Thus is an awkwardness in the plot brushed aside, because Barager cannot connive in such unchristian possibilities.
The prose is good, although in keeping with the book’s aspirations it has a tendency to be overwritten, even overwrought. There is a fondness for lingering or lavish descriptions of stylish interiors, for example, almost to the point of ‘life-style’ or product placement. Whether via a quick sketch or precise detailing, landscapes, people’s clothing, faces, emotions - no description is ever understated, but tends rather to the baroque. This is perhaps something more typical of American novels, which tend to aim for the ‘heroic’ style, whereas the English preference is for spare, pared down prose. In this case, the paradox is that the density of the prose tends to obscure, rather than illuminate the characters & events.
Barager is himself a nephrologist, which makes for authoritative & interesting details of medical conditions & treatments, if not always easy for the layperson to understand.
What this book says to me, above all, is that it is not a good idea to use a novel as a proselytising, let alone an evangelising medium.
Read more
Report abuse

Annie56
4.0 out of 5 stars Very enjoyable
Reviewed in Canada on 12 May 2018
Verified Purchase
Very interesting story told from different perspectives than the norm. Quite emotionally wrenching and very sympathetic characters. Reminds us we are all flawed in some way, and that life is an uphill struggle for each of us, for a variety of reasons.
Read more
Report abuse

Scott
2.0 out of 5 stars Boring book
Reviewed in Canada on 4 September 2018
Verified Purchase
Too many medical terms. Interesting storyline but unless you are familiar with lots of medical terms/ conditions then it's a tough read
Read more
Report abuse