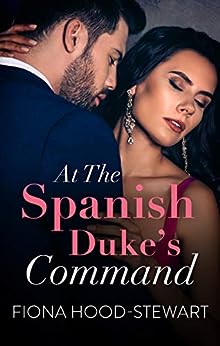 by Fiona Hood-Stewart (Author) Format: Kindle Edition
See all formats and editions
Sorry, there was a problem loading this page. Try again.

A flaming attraction but where's the future?

Arrogant, autocratic–but also superbly Spanish and sensual. Georgiana fell headlong for Juan Felipe Monsanto, Duque de la Caniza, even though he was supposed to be her guardian. And it seemed that, try as he might, Juan couldn't resist the flaming attraction between them either.

But Juan was about to make a marriage of convenience with another woman. There could be no future for their affair. So how could Georgiana tell him that she was carrying his child?

Fiona Hood-Stewart credits her mother with putting her on the path to becoming a writer, who encouraged her to read avidly! Fiona has led a somewhat cosmopolitan life – schooled in Switzerland and fluent in seven languages, she draws on her own experiences in the world of old money, big business and the international jet set for inspiration in creating her books. Fiona lives on a stud ranch in Brazil with her two sons. Readers can visit her at: www.fiona-hood-stewart.com

Sweetpea
5.0 out of 5 stars Good story worth the read
Reviewed in Australia on 7 June 2018
Verified Purchase
This was a new author for me - I did enjoy all of her books ,
Read more
Helpful
Report abuse
See all reviews

Ree
1.0 out of 5 stars amazingly bad.....
Reviewed in the United States on 26 April 2014
Verified Purchase
Why does the writer put her hs in such a humiliating situation? The H is marrying a woman who does not love him and he has every intention of marrying her. The h is 19 yrs old and maybe not able to deal with her attraction but the 30 yr old H shd have known better. The modern woman is surely not so needy that she is willing to lose her dignity and self respect. Very disappointed by this writer.
Read more
4 people found this helpful
Report abuse

MRooks
4.0 out of 5 stars I liked it
Reviewed in the United States on 30 June 2015
Verified Purchase
I thought the writer did a good job with the book. An eleven year difference in age doesn't sound so bad and to use an old expression, one used in this book, it takes two to tango. The main characters have great chemistry, good dialogue and the book has a good storyline. I liked it and recommend it.
Read more
2 people found this helpful
Report abuse

Winnie
5.0 out of 5 stars Five Stars
Reviewed in the United States on 24 July 2015
Verified Purchase
Very romantic
Read more
Report abuse
See all reviews
Back to top
Get to Know Us
Make Money with Us
Let Us Help You
And don't forget:
© 1996-2022, Amazon.com, Inc. or its affiliates