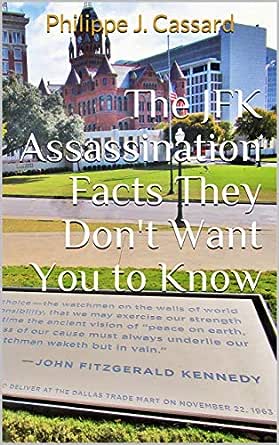 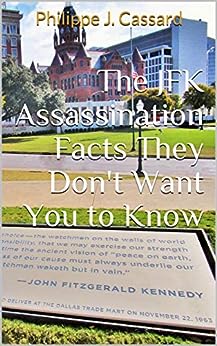 In this book, Philippe J. Cassard, as a European observer of the United States where he lives periodically, takes a close look at the distortion of truth concerning the assassination of President Kennedy; a law of silence kept alive, well beyond the fiftieth anniversary of his death. The author gives us a concrete narrative which informs the reader less on the rumors which have fueled the many conspiracy theories but more on the impressive number of facts supporting the irrefutable evidence of a coup d’état. Inspired by his trips to the scene of the assassination and by his participation in several conferences on the subject, Philippe J. Cassard brings answers to this historical drama and gives possible reasons as to why the dissimulation of the facts endures.
click to open popover

Eddie Smith
4.0 out of 5 stars Glad I took a chance on this book.
20 August 2019 - Published on Amazon.com
Verified Purchase
Being fascinated by the JFK assassination for a long time, I decided to take a chance on this book, even though there were not any reviews when I made the purchase. i have been disappointed in the past when making such a purchase, but Phillipe Cassard's book on John Kennedy's assassination is very good.

The book extensively leans on all the top JFK researchers from past and present (Mark Lane, Robert Groden, Josiah Thompson, James DiEugenio, James Douglass, etc.), and is a solid dive into nearly every aspect of the case. After reading Cassard's evidence, it is hard to believe that books are still published that push the ridiculous "lone nut" theory.

The only real downside to the book is that since it was independently published, typos, misspellings and missing words are somewhat frequent. For example, author Richard Belzer is referred to as "Richard Bletzer" at several places. Lee Harvey Oswald co-worker Buell Frazier is referred to as "Bull Frazier" at several places, etc. But as long as a reader can overlook those issues, the book is a thorough overview of the JFK assassination.

wright7700
5.0 out of 5 stars Excellent, concise, well organized book on JFK conspiracy
16 November 2019 - Published on Amazon.com
Verified Purchase
This is an excellent, well organized source of facts about the Kennedy assassination. I have read many other books no the subject, and this is among the best. Concise, objective, kind of scary.
Read more
One person found this helpful

Indy52
5.0 out of 5 stars What they did to JFK they are doing it to Trump.
1 January 2020 - Published on Amazon.com
Verified Purchase
Nice summary of where we stand in uncovering the truth.
Read more

J.L. Populist
5.0 out of 5 stars A Foreign Journalist's Perspective.
16 September 2019 - Published on Amazon.com
I have read a large number of books on the JFK assassination over the years.
This book stands out for a number of reasons.
He spends a fair amount of time discussing John Kennedy's intentions regarding Viet Nam and his political worldview, particularly with Russia and Cuba.
One subject that Mr. Cassard covers better than most authors is the relationship (or collusion) between the C.I.A. and the media. That goes a long way in explaining the reluctance to report new material or question the Warren Report.
This is one of the more recent books and it's also one of the better on the subject.
The author is one of the most effective at systematically discrediting the fraud known as the Warren Commission Report. He dismantles it convincingly.
However, he did not address the identity of the assassins or people on the ground that were involved.
That may have called for speculation on his part?
At any rate, this a 5 star book all day long and I would put it in the company of "Ultimate Sacrifice" on the subject of the JFK Assassination.
Read more
6 people found this helpful

P.Coates
5.0 out of 5 stars An eye opener
27 May 2019 - Published on Amazon.com
This book is a very compelling read and obviously a result of a great deal of serious research concerning John F Kennedy's assassination. It provides readers with fascinating evidence based on proof, and is thought provoking, making them aware of many facts unknown to the general public. The author gives us a European viewpoint which makes this book unusual and different from other books on the same subject, and includes a timeline and a table which summarise the evidence of a plot and of a cover-up . If any reader has unanswered questions or is any doubt about there having been a cover-up of a plot to kill JFK then this is the book for you!
Read more
9 people found this helpful
Go to Amazon.com to see all 5 reviews 4.7 out of 5 stars
Get FREE delivery with Amazon Prime
Prime members enjoy FREE Delivery and exclusive access to movies, TV shows, music, Kindle e-books, Twitch Prime, and more.
> Get Started
Back to top
Get to Know Us
Make Money with Us
Let Us Help You
And don't forget:
© 1996-2020, Amazon.com, Inc. or its affiliates