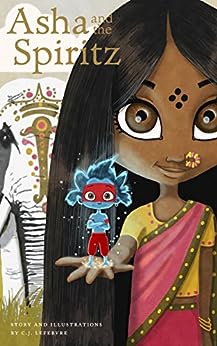 Asha and the Spiritz Kindle Edition

C.J. Lefebvre is a female human being living on Earth. Born to two human parents (or so they say) some time in the past century, she has since lived in and traveled to many countries, hoping to find the perfect land. In vain.

One day, she realized the perfect country of her dreams was nothing but a chimera, so she decided that it didn’t matter where she lived anymore, as long as there was love around her, sunshine inside her head and ice cream in her fridge.

She has been growing her own personal portable sun in a tiny garden in the back of her head for years, and now wishes to share it with the world. In this way, she hopes to come across many other people’s personal portable suns. People, just like her, who are also human beings living on Earth and trying to grow their own stars to light their path.

Other than that, C.J. Lefebvre is a graphic designer and the illustrator behind Tall N Curly, a comic blog started in 2012 that’s followed by over 40,000 humans around the globe (most of them sun farmers too).

5.0 out of 5 stars
5 out of 5
9 global ratings
How are ratings calculated?
To calculate the overall star rating and percentage breakdown by star, we don’t use a simple average. Instead, our system considers things like how recent a review is and if the reviewer bought the item on Amazon. It also analyses reviews to verify trustworthiness.

shopper7916
5.0 out of 5 stars Draws you in deeply and fills you up with a calm power! A great coming of age book too!
Reviewed in the United States on 21 July 2018
Verified Purchase
Out the box this book was beautiful as far as the cover. The book was larger than I thought at 350+ pages! The cover has a nice finish and the pages that have the illustrations have a lovely sheen with slightly raised printing that feels good in the hand. The entire book has some weight on it which I love.It was made with great attention to detail. I was surprised at the amount of chapters it has but they are quick reads and totally different thought patterns so I appreciate the separations. I enjoy the descriptions of the scenery as well I am very captivated and eager to turn the pages. I may have to buy another book to share with the girls and keep this for myself.
This book is great for anyone who struggles with their emotions. It teaches the power of your thoughts and emotions. It helps to show ones personal strengths, friendship building, self awareness, learning and living your legacy... Oh I could really go on and on. This book could easily have been a series and if it were a movie I would totally go see it! The writing is so vivid though that along with the illustrations I can see everything as Asha went along the journey!
Read more
Report abuse

Edgar
5.0 out of 5 stars Fantastic Read! My 8 year old daughter read it ...
Reviewed in the United States on 24 April 2016
Verified Purchase
Fantastic Read! My 8 year old daughter read it in one day. She said she LOVES the descriptions in the book and she felt like she was in the story herself. It is a magical story that flows beautifully. I really enjoyed reading it too. Once it is in hard copy I will make sure to get a copy for her and one for her school. Thank you for sharing this story with the world. :)
Read more
One person found this helpful
Report abuse

Haley
5.0 out of 5 stars Lovely illustrations and story
Reviewed in the United States on 27 July 2019
Verified Purchase
The illustrations are beautiful and the story is so pure and good. We love the book so far. (Reading to a 5 yo)
Read more
Report abuse

Dina
5.0 out of 5 stars Amazing
Reviewed in the United States on 14 January 2021
Verified Purchase
This book is amazing, so inspiring and uplifting. A must read!
Read more
Report abuse
See all reviews
Back to top
Get to Know Us
Make Money with Us
Let Us Help You
And don't forget:
© 1996-2021, Amazon.com, Inc. or its affiliates