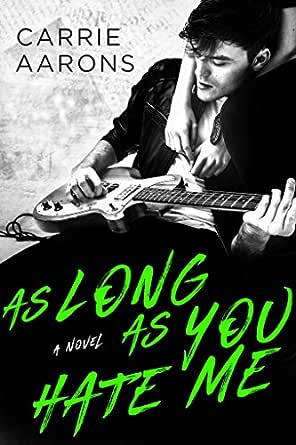 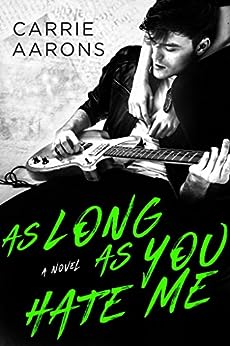 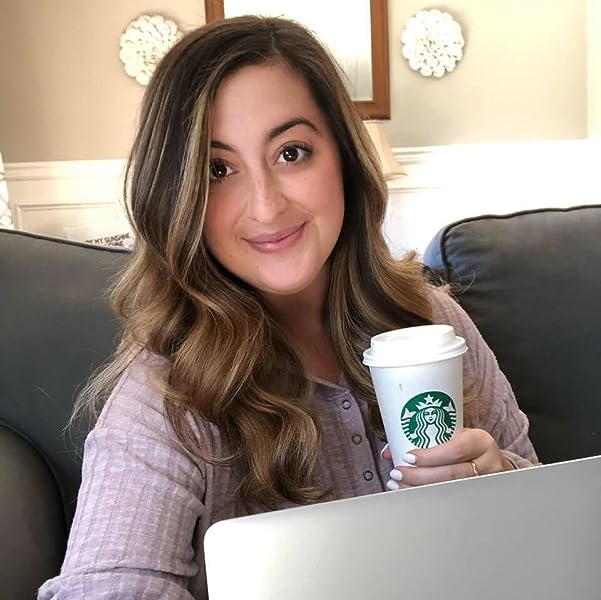 As Long As You Hate Me Kindle Edition

3.8 out of 5 stars
3.8 out of 5
21 global ratings
How are ratings calculated?
To calculate the overall star rating and percentage breakdown by star, we don’t use a simple average. Instead, our system considers things like how recent a review is and if the reviewer bought the item on Amazon. It also analyses reviews to verify trustworthiness.

bluebird
TOP 500 REVIEWER
3.0 out of 5 stars Second chance hate 3.5*
Reviewed in Australia on 10 December 2017
Verified Purchase
There's quite a few second chance stories like this around. Rock star seeks fame leaves first love behind, then they discover who had a hand in their breakup.
Overall I enjoyed it but it wasn't out there for me.
Read more
Helpful
Report abuse

M. Berens
4.0 out of 5 stars Good Second Chance/Rocker Romance
Reviewed in Australia on 4 December 2017
As Long As You Hate Me is a quick second chance romance as well as a rocker romance. It has everything you would expect in a rocker romance: sex, glamour, and heart melting lyrics. Those lyrics really got to me.

Dean Jacobs is a stereotypical rock star with good looks, talent, arrogance, and plenty of women. He’s easy to like, despite the arrogance and sleeping around. He’s never forgotten his high school sweetheart; she’s the muse for every love song he’s written. (That certainly won my heart.) Now he’s in trouble and needs her help...but she hates him.

Kara O’Connor is focused, career driven, and still secretly devastated from her breakup with Dean. She was very relatable; I felt like she could easily be one of my friends. Despite her hatred, Kara knows Dean couldn’t have done what he’s accused of and reluctantly agrees to help.

The storyline drew me in from the very first pages of the prologue. I read until my eyes were blurry. Then I started reading again the next morning. It was that riveting. I would have liked the epilogue to give me more of a glimpse into the futures, but overall the book was well written.

This was my first book by Carrie Aarons. I would love to see some of the secondary characters get their own books with their back stories. Heidi and Skylar in particular intrigued me.

Sharon Thérèse
TOP 1000 REVIEWER
4.0 out of 5 stars Love at Last.
Reviewed in Australia on 4 December 2017
Reviewed by Tracey Lou on behalf of KFF

This was my very first book by this author, but the story line was what caught my attention as I'm a big fan of bad boy rock stars. I have to say I wasn't disappointed. And this was a second chance at love story which I'm a big advocate of.

Kara O'Connor was living her life as best she could in the small town that she grew up in. This was not how she imagined her life would be. She thought she would be married by now to her high school sweetheart. How wrong could she have been. She thought that they were forever. She would always ask him at least once a week "Dean Jacobs will you always love me?" And  he would always reply "Until the river runs dry and the moon goes black."

Dean Jacobs was a small town boy with big dreams, and nothing was going to get in his way. It was love at first sight when he saw her from across the other side of the cafeteria. Music was his first love and after misunderstandings on both their parts, he left her behind to seek his fame and fortune, but never once did he stop loving her.

The years roll by and the story takes us forward to where Dean has made his fortune and living the highlife in Hollywood, but things take a drastic turn after a disastrous relationship turns sour, soiling his reputation. Management agrees that he needs to find a nice girl and spin a story that he is now settling down and behaving himself. Attending the wedding of a high school friend is where these to meet up again. The hurt and bitterness is still very much alive in Kara and she cringes at the thought that the lyrics in Dean's songs are based on her and the love they once had.

Has dean found the perfect person to help save his reputation and career in front of the media ? Will Kara stand for no nonsense? She's no push over but he asks for help and she agrees. Will this develop into something more. Not forgetting this is a second chance romance story, will they be able to overcome the hurt and bitterness they feel, or will they reconnect and find the love again they they once shared

I have to say when I first started this book and found out what Dean was about to do, I took an instant dislike to him. In my head I was calling him all those bad words under the sun lol! But he soon wooed me around. He wasn't the ***** I though he was. He really did love Kara in his own way. She came across in the book at some points as being a complete push over, but I was happy to see her come to grips with the situation and give as good as she got.

This was a story of a couple who were meant to be together but got lost along the way. Will they find there happy ending? I look forward to reading more of this authors work.
Read more
One person found this helpful
Helpful
Report abuse

Laura
5.0 out of 5 stars My heart!
Reviewed in Australia on 20 June 2018
This story is so wonderful! I am at a loss for words for how much I loved reading how the characters found each other again!
Read more
Helpful
Report abuse
See all reviews

Eileen R (Bangor Belles)
3.0 out of 5 stars Sweet Story
Reviewed in the United Kingdom on 29 December 2017
Verified Purchase
So what led me to purchase this book? Firstly, its a Rockstar and secondly a second chance romance, both of which i'm particularly partial to read.
This book was well written, and any opinion i am giving here are purely my own.
Dean Jacobs left the High School Love of his life Kara, to chase his dreams of being a rock star. Now at the pinacle of his career, events lead him to re-enter her life and hope she agrees with his plan to save his career.
I had so many issues with these characters. I never got to like Dean, his every action and excuse was always self centred and for the benefit of only himself. Kara has moved on with her life and is now finishing residency as a dermatologist. The fact that she was able to switch from residency to residency in a specialist field just wouldn't happen. Mostly, i disliked that she was a complete walk over and i couldn't really find anything in personality to capture me. Despite Dean's childish, egotistical behaviour she caved without so much as a whimper at his every wish or want. How could she have went 7 years, without knowing a single thing of his career?I am sure that would have been impossible living amongst, friends and family who adored him yet she never heard any of his music? I can't imagine any woman trusting a man so easily when he's just had a woman openly in his bedroom next door nor hiding his actions even if they are in a somewhat "pretend" relationship. Despite many sweet, hot and sexy moments I disliked that he was only back in her life because "he needed it" and never felt at any time that he in any way redeemed himself nor did anything about him or his life really change. Even though it may have been a book that failed to captured me, that doesn't mean it would be the same for other readers.
Read more
2 people found this helpful
Report abuse

Lollyp
5.0 out of 5 stars First book by this author
Reviewed in the United Kingdom on 29 January 2018
Verified Purchase
A must read for anyone who enjoys love stories , 2nd chances , I want to hear the songs that Dean Jacobs wrote , great book thanks Carrie Aarons.
Read more
Report abuse

Terry L
4.0 out of 5 stars 4 1/2 Stars! An emotional roller coaster!
Reviewed in Canada on 5 December 2017
Verified Purchase
Dean and Kara were high school sweethearts, but when high school ended, Kara went off to college and Dean went to LA to chase his dream of becoming a rock star. After 2 years of a long distance relationship, Dean breaks Kara’s heart by cheating on her. Dean becomes the rock star he’s dreamed about by writing songs about their love and break-up. When Dean gets in some hot water, he comes up with a plan to have Kara pretend to be his fiancé to help clean up his personal image and in return he will pay her handsomely so that she will be able to pay off her student loans. She agrees to the charade for 1 year. It doesn’t take long for their hearts to get involved, but will the forces of stardom get in their way?

This is a sweet, heartwarming story of misunderstandings, heartbreak and forgiveness. There were times I just wanted to shake them, so they could wake up and see what the other was offering. You will laugh and cry with Dean and Kara on their journey.
Read more
Report abuse

MJ Symmonds
5.0 out of 5 stars Amazing second chance romance!!
Reviewed in Canada on 23 December 2017
Verified Purchase
This book has everything: Second chance, Fake Fiance, Rockstar Romance. I love all of these individually but put them all together & you have one epic read!!

I loved Cara and Dean so much. Yeah in the beginning Dean comes off as a cocky Rock Star but I feel he redeems himself by the end. Cara is a fun & sassy & will do things on her terms.

This was such a great read. It takes us from when these two were just high school sweethearts, through heartbreak & misunderstanding. We end up with a fake fiance and court case in which Dean is accused of something that Cara knows he would never do.

The push & pull between these two was just so exciting & dynamic. I just couldn't wait to dive back in each time I picked it up.
Read more
Report abuse