Skip to main content
An Artist of the Floating World (Faber Fiction Classics S.) and over 1.5 million other books are available for Amazon Kindle . Learn more
Share <Embed> 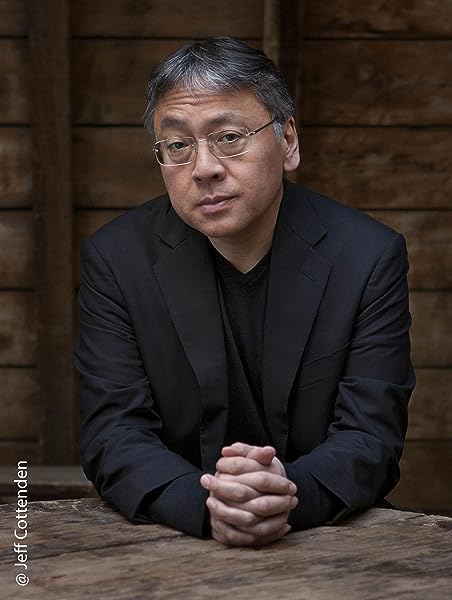 An Artist of the Floating World Paperback – 1 July 2005

Page 1 of 1 Start overPage 1 of 1
Previous page
Next page
Start reading An Artist of the Floating World (Faber Fiction Classics S.) on your Kindle in under a minute.

Kazuo Ishiguro was born in Nagasaki, Japan in 1954 and came to Britain at the age of five. He attended the University of Kent and studied English Literature and Philosophy, and later enrolled in an MA in Creative Writing at the University of East Anglia. He is the author of the novels A Pale View of Hills (winner of the Winifred Holtby Prize), An Artist of the Floating World (winner of the 1986 Whitbread Book of the Year Award, Premio Scanno, and shortlisted for the 1986 Booker Prize), The Remains of the Day (winner of the 1989 Booker Prize) and When We Were Orphans (shortlisted for the 2000 Booker Prize and Whitbread Novel of the Year).Kazuo Ishiguro's books have been translated into twenty-eight languages. The Remains of the Day became an international bestseller, with over a million copies sold in the English language alone, and was adapted into an award-winning film starring Anthony Hopkins and Emma Thompson.In 1995 Ishig

4.3 out of 5 stars
4.3 out of 5
466 global ratings
How are ratings calculated?
To calculate the overall star rating and percentage breakdown by star, we don’t use a simple average. Instead, our system considers things like how recent a review is and if the reviewer bought the item on Amazon. It also analyses reviews to verify trustworthiness.

WILLIAM MORE
3.0 out of 5 stars Sinking in the Floating World
Reviewed in Australia on 27 April 2015
Verified Purchase
I like it, probably for the wrong reasons. Besides the Floating World of Japanese art Mr Ono inhabits a number of insubstantial worlds: his early life and education, his teachers, his development to become a dedicated artistic servant of Second World War imperialism and finally the realization of his fatal error of integrity. Yet, hardly anyone else seems to notice, or care. Is this a collective Japanese amnesia, that enables him to navigate family problems and a daughter's tricky marriage into social respectability? Another layer of unreality is that Ishiguro's presentation of Englished Japanese dialogue seems more Gilbert and Sullivan than the real thing. Strange in the author of The Remain of the Day?
Read more
Helpful
Report abuse
See all reviews

Archy
4.0 out of 5 stars Fine writing; little resolution
Reviewed in the United Kingdom on 1 October 2017
Verified Purchase
Really, the four stars are for the quality of the writing rather than the story itself, which I found meandering and hard to follow. Ono is the artist of the title, and in the early chapters it's hinted at that he has committed some heinous crime during the war years. But as the story progresses, told with irritating flashback reminiscences it's never really made that clear what exactly it is that Ono has done that has so alienated him from his erstwhile colleagues.

The plot itself centres on his attempts to arrange a marriage for his remaining daughter, the first marriage plan having fallen through for unspecified reasons. Instead of any great reveal, however, the story simply fizzles out. Ulitmately a disappointment, especially read after some of his others, notably Never let me go and The remains of the day, but like I said earlier, four stars for some fine writing. Not the Ishiguru I'd recommend first though.
Read more
10 people found this helpful
Report abuse

Vigilantius
5.0 out of 5 stars A beautifully succinct and many-layered telling of an unusual story
Reviewed in the United Kingdom on 13 December 2018
Verified Purchase
It deserves 6 stars. This is a beautifully succinct and many-layered telling of an unusual story from an unconventional angle: an old artist in Japan in 1948 gradually comes to realise that he should perhaps not have been such an ardent supporter of the militaristic and fanatical regime which took his country into a disastrous war. He realises this through muted interactions with his daughters and their families, especially during the protracted marriage negotiations for his younger daughter – and it is only gradually that the reader learns to doubt what the narrator thinks. All this is told with delicacy and subtlety, with much left unsaid and most thoughts unspoken. Reading between the lines is essential.

The subject is how the Japanese came to grips - or failed to do this - with their war-guilt and the cataclysmic impact of American occupation. Things are not neatly resolved, but this particular part of the world unfolds with immense clarity, gentleness and economy. No wonder Ishiguro got the Nobel Prize for Literature in 2017.

The contrast with the long-winded and tortuous – albeit marvellously told – domestic dramas of the The Makioka Sisters (published initially in 1943) by Jun'ichirō Tanizaki is telling.
Read more
4 people found this helpful
Report abuse

Stiven Skyrah
4.0 out of 5 stars Captures the moment: Japan post WW2
Reviewed in the United Kingdom on 4 March 2018
Verified Purchase
Second reading. The gist of this novel is the narrator's culpability for his patriotic actions during the war with the U.S. Set in a suburb of Tokyo during the American occupation, the narrator, Masuji Ono, is now surrounded by those who blame him for Japan's disastrous gamble on war and those like himself. Ono's generation was that of the old men cheerleading for war. And there can be no question about his complicity. In his youth, ​he trained as an artist of the demimonde or "floating world," but turned to graphic propaganda during the war. His work was responsible for motivating untold thousands of young Japanese men to throw their lives away. Here's the rub though: Ono, in the end, was nothing more than a patriot. I agree that nationalism is abhorrent and that he was on the wrong side of history. But really it was Ono's misfortune, as it was Japan's, to be so catastrophically led. It strikes me as absurd that those around him berate and belittle him. There is even the suggestion by his eldest daughter that he do the honourable thing and commit seppuku, (literally, "stomach-cutting"), as a means of cleansing the family name and clearing the way for the younger daughter's marriage negotiations. Reading the book I was reminded of how U.S. soldiers were treated when they returned from Vietnam. Ono was a combatant, no question. But it's really those around him, him who've changed since the defeat, not Ono himself.

Also read Ishiguro's The Remains of the Day, A Pale View of Hills and When We Were Orphans.

I believe Ishiguru's model here may have been Yasunari Kawabata, the Japanese Nobelist. An Artist of the Floating World reminds me in some ways of Kawabata's The Old Capital.
Read more
5 people found this helpful
Report abuse

Amazon Customer
4.0 out of 5 stars Thought provoking
Reviewed in the United Kingdom on 2 May 2017
Verified Purchase
I love Kazoo Ishiguro's writing, but after reading the Buried Giant I don't think anything will quite match how much I liked it. Ishiguro seems to write in a same way in each of his books in a reminiscent way. What he really masters is his way of making the reader feel the atmosphere of the time, the place and the main character.

This was an interesting book about a time before Japanese militarism and after the second world war. It was a small book that could be read really quickly! Thought provoking!
Read more
4 people found this helpful
Report abuse

neutraltones
4.0 out of 5 stars Pitch perfect
Reviewed in the United Kingdom on 18 August 2014
Verified Purchase
Nothing much happens in this slim novel but the tone, the phrasing and the subtle characterisation make the book a delight to read. It's clear that Misuji Ono, first person narrator and artist of the title, is a prototype for the butler Stevens in the more ambitious 'The Remains of the Day', and I have seen this confirmed in an interview with Kazuo Ishiguro in The Paris Review. Both men are precisely spoken, nostalgic observers of their own life, evincing a mixture of pleasure and regret, with undercurrents of self-regard and disappointed entitlement. Both are unreliable narrators, apologists to 'mistakes' in some of their life choices while drawing a veil over certain details and retouching others to better effect. Both are left-behinds in a rapidly changing environment. Despite their faults and peccadillos you can't help but ache with them as they wistfully watch their world recede down the stream of change.
Read more
7 people found this helpful
Report abuse
See all reviews
Back to top
Get to Know Us
Make Money with Us
Let Us Help You
And don't forget:
© 1996-2021, Amazon.com, Inc. or its affiliates