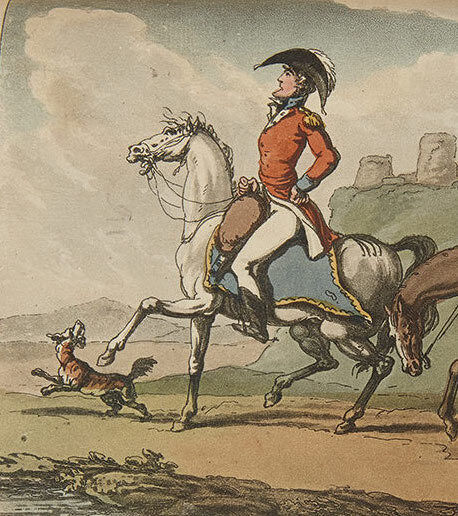 Artist on Campaign: being the Adventures of Ralph Oughtred Esq in Portugal and Spain in the Year 1809 Paperback – 29 October 2019

by Caroline Miley (Author)
5.0 out of 5 stars 2 ratings
See all formats and editions
Sorry, there was a problem loading this page. Try again.

Ralph Oughtred has few ambitions – to be rich, or at least out of debt, to eventually marry his charming mistress, and to get into the Royal Academy.

An amiable rake in Georgian London, Ralph is an artist who thinks he’s got it made when he wins a big commission to paint the Duke of Wellington’s generals. But before he can put brush to canvas they’re whisked off to Portugal to fight Napoleon, and he must follow or lose the money. In a comic romp through Portugal and Spain in the train of the British army, Ralph leads the reader through war, art, sex, love, travelogue, musings on life and a lot of drinking. He’s recruited as a spy, accidentally leads a cavalry charge, makes love to an officer’s wife during the Battle of Porto, and is captured by the French.

A man of his time and an everyman bound to the wheel of fortune, Ralph travels the road of the reluctant hero from innocence to experience. But he’s intelligent and complex and his adventures will appeal to the reader who wants their history to live, their escapism to be philosophical and their narratives lyrical. The book is written with a deft, light touch; there’s just enough accurate military history, and the characters – Ralph and his friends, and the generals he paints – are varied and amusing.

Artist at Large is that rare bird, a novel that is literary, historical and funny, a stylish evocation of the history and manners of an era, and an entertainment of the highest order.

"Artist on Campaign is literary, historical and funny, a stylish evocation of the history and manners of an era, and an entertainment of the highest order." --Mark Tredinnick, editor, mentor and author The Blue Plateau

"Entertaining and will hold the interest of both those who specialize in the era and the casual reader. Highly recommended." --Robert Burnham, editor the Napoleon Series

"A delightful, amusing, colourful romp, stylishly crafted and brought off with great pace and gusto. Miley is a writer of real talent with a very good story." --Timothy Balding, author The Impostors, The Zucchini Conspiracy

"Who knew painting Army bigwigs' portraits could be so frustrating, so scary and so much fun?" - Jane Sullivan, author (Storytime, The Little People) and literary journalist.

Caroline Miley is an art historian and writer with a long-time passion for art, history and literature. After several years writing art and craft criticism and social comment, she realised her lifelong ambition, fiction writing. Her novels include The Competition, about an artist in Georgian England who becomes involved with the Luddites, and Artist on Campaign, a comic romp in which a Georgian era artist gets a commission to paint the Duke of Wellington's generals, but finds he's got more than he bargained for. Learn more at: www.carolinemiley.com or https: //www.facebook.com/carolinemileywriter/
Tell the Publisher!
I’d like to read this book on Kindle

Caroline Miley is an art historian and writer with a long-time passion for art, history and literature. After several years writing art and craft criticism and social comment, she realised her lifelong ambition, fiction writing.

Her novels include The Competition, about an artist in Georgian England who becomes involved with the Luddites, and her latest, Artist on Campaign, a comic romp in which a Georgian era artist gets a commission to paint the Duke of Wellington's generals, but finds he's got more than he bargained for.

Bill Palmer
5.0 out of 5 stars An entertaining romp through a fascinating corner of history.
Reviewed in Australia on 25 November 2019
Verified Purchase
It’s 1809, and England is at war. Ralph Oughtred is a jobbing portrait painter in London, keen to make ends meet, keep the creditors at bay, and enjoy life to its fullest. Then he receives a commission that will set him up for life: to paint all the generals of the army on campaign in Portugal and Spain, a commission that leads him out of his comfort zone and into a foreign land packed with adventure, escapades of all sorts – military, artistic, sporting, and sexual – and the frustration of trying to pin down a dozen generals busy running a war.

Miley’s novel leads us through Ralph’s experiences as an artist on campaign at a cracking pace. All are drawn with an unflagging dry wit, and fine observant eye. The novel is entertaining throughout, extremely funny in many places, with Miley’s trademark restrained and ironic observational humour. We are treated to numerous ludicrous escapades, being kidnapped by bandits, riding a horserace, being recruited to spy, leaving us shaking our heads with a smile at what befalls our hero, including those things he brings on himself. Miley sets the scene throughout with fine descriptions of the countryside and towns Ralph travels through, as they would’ve been two hundred years ago, in many cases largely unchanged today. She brings an artist’s eye to these descriptions, and as in her previous novels, creates vivid images in the mind of the reader. And all this is presented with extraordinary historical accuracy. No dry historical account, we nonetheless leave this hugely entertaining novel with a vivid understanding of the realities of an army on the move, and the social mores of the time. We read a description of what such an army entails – the troops, the baggage, the vast array of equipment, the enormous logistical arrangements, and the camp followers, and what it takes for all this to move from one place to another. Even the more implausible events our hero witnesses in battle and behind the scenes are actually historically true. Our hero is only ever on the periphery of battle, but Miley captures with real feeling Ralphs disillusioning shock when battle turns out to be ghastly and sickening and not the adventure he naively anticipates. And through all this, Ralph works his way – in fits and starts and with numerous setbacks - through his portrait sittings with each of the actual general’s present in the British Peninsular campaign. As Ralph’s brush and charcoal capture the appearance of each general, Miley draws an entertaining but highly accurate pen portrait of the personalities of each of these real historical figures: the pompous and the down to earth, the funny and the boorish, the brilliant and the incompetent.

Miley’s novel is a great fun read, with hidden depths. On the surface it is a series of episodes woven together into the hero’s journey to complete his commission. But this entertaining superstructure is built on very solid foundations: Miley’s meticulous and extensive historical research, her deep understanding of both the art of the time and what the life of a professional artist entailed, and her impressive understanding of the social attitudes and conditions of the time. I can’t recommend this book more strongly.
Read more
One person found this helpful
Helpful
Report abuse

Colleen
5.0 out of 5 stars A beautifully written, witty, engaging novel with a wonderful feel for the Napoleonic period!
Reviewed in Australia on 2 November 2019
Artist on Campaign is a superb - and I don't say that lightly - historical novel set in the Peninsular Wars (fought by Wellington against Napoleon's generals in Spain). It's a historical context that' s not so well known and frequently written-about as, say, the lead-up to and aftermath of Waterloo, or the Regency, and so it's even more impressive that the author's managed to evoke the period so accurately.
The novel concerns the adventures of Mr Ralph Oughtred, an impecunious artist who's hired (in the nick of time, as far as his finances are concerned) to paint portraits of all the main British generals engaged in the war. Damn it, they keep dying - so he needs to be quick! Oughtred has a lady friend - "dearest Lucinda" - who's delightfully portrayed - but of course, once he's in Spain and Portugal, temptations abound. Not only temptations, of course, but risks - it is a war zone after all, so Oughtred finds himself embroiled in more adventure than he bargained for.
Miley does 'period conversation' brilliantly - she writes as if she's actually living in the time in which the novel is set. On one level you're drawn in because the style is just so authentic, and on the other, she brings a modern sense of pace and liveliness that's really enjoyable. Her characters have depth and wit: they're also likeable and all too human. She has a historian's grasp of the context and a writer's instinct for plot and style. In fact, there's absolutely nothing I didn't like about this book - it's a tour de force,, and Miley is a brilliant writer. I hope she'll follow up with more historical (or other) fiction.
I should note that I received the book free in return for an honest review, but if i hadn't liked it so much, I would have either not reviewed it at all, or given it the rating it deserved. So the above is a completely honest opinion - I loved it!
Read more
One person found this helpful
Helpful
Report abuse
See all reviews
Back to top
Get to Know Us
Make Money with Us
Let Us Help You
And don't forget:
© 1996-2021, Amazon.com, Inc. or its affiliates