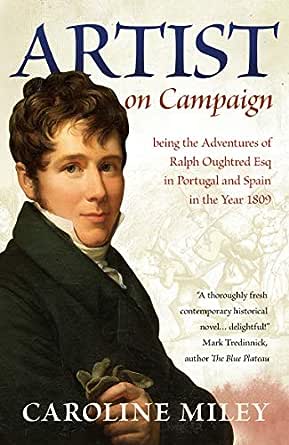 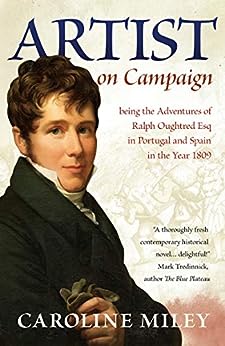 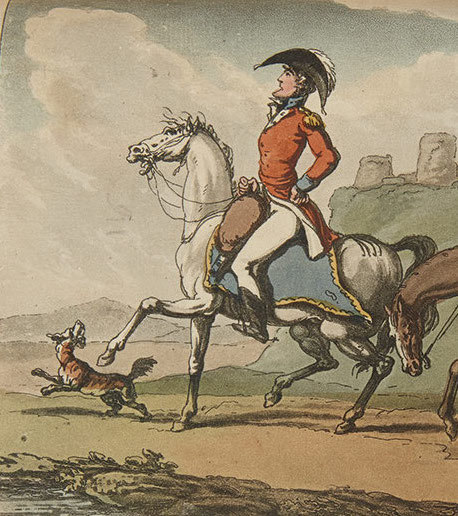 Artist on Campaign: being the Adventures of Ralph Oughtred Esq in Portugal and Spain in the Year 1809 Kindle Edition

Ralph Oughtred has few ambitions – to be rich, or at least out of debt, to eventually marry his charming mistress, and to get into the Royal Academy.

An amiable rake in Georgian London, Ralph is an artist who thinks he’s got it made when he wins a big commission to paint the Duke of Wellington’s generals. But before he can put brush to canvas they’re whisked off to Portugal to fight Napoleon, and he must follow or lose the money. In a comic romp through Portugal and Spain in the train of the British army, Ralph leads the reader through war, art, sex, love, travelogue, musings on life and a lot of drinking. He’s recruited as a spy, accidentally leads a cavalry charge, makes love to an officer’s wife during the Battle of Porto, and is captured by the French.

A man of his time and an everyman bound to the wheel of fortune, Ralph travels the road of the reluctant hero from innocence to experience. But he’s intelligent and complex and his adventures will appeal to the reader who wants their history to live, their escapism to be philosophical and their narratives lyrical. The book is written with a deft, light touch; there’s just enough accurate military history, and the characters – Ralph and his friends, and the generals he paints – are varied and amusing.

Artist on Campaign is that rare bird, a novel that is literary, historical and funny, a stylish evocation of the history and manners of an era, and an entertainment of the highest order.

“Artist on Campaign is literary, historical and funny, a stylish evocation of the history and manners of an era, and an entertainment of the highest order.”
- Mark Tredinnick, editor, mentor and author The Blue Plateau

“Entertaining and will hold the interest of both those who specialize in the era and the casual reader. Highly recommended.”
- Robert Burnham, editor the Napoleon Series

"A delightful, amusing, colourful romp, stylishly crafted and brought off with great pace and gusto. Miley is a writer of real talent with a very good story."
- Timothy Balding, author The Impostors, The Zucchini Conspiracy
click to open popover

Yvonne (A Darn Good Read)
5.0 out of 5 stars A Very Appealing Combination of Art and History
30 November 2019
Format: Kindle Edition
Ralph Oughtred is a struggling portrait painter. When offered a commission by the War Office to paint a group portrait of fourteen generals still on active service, his future is secure. It will get him out of debt, enable him to marry Lucinda, his longtime mistress, and perhaps purchase property.

To Ralph, all seems straight forward until he is advised to work down the list of names he is given strictly in order of seniority. From the start his schedule is disrupted, for the first name on the list, Lieutenant-General Sir John Cradock, is in Lisbon and therefore unavailable. The next name is Lieutenant-General Sir Arthur Wellesley, but Wellesley's sitting is cancelled when the army is ordered to Portugal at short notice. To ensure the success of his commission, Ralph is left with no other option but to accompany the army and go wherever the generals on his list can be found.

Artist on Campaign captures the mood and logistics of an army in the field. Engagement with the enemy is interspersed with the more mundane aspects of campaigning: marching, packing/unpacking, drinking, dining, amorous adventures, gambling and, by the number of adjutants that Ralph deals with, mountains of paperwork. Ralph is thrust into this world and despite his initial qualms as to how he will manage, he does very well.

At the suggestion of his friend, Captain Jackson, he attaches himself to the Royal Artillery and is soon inducted into the military way of life. Although he likes the companionship, never having a minute of privacy is not for him and he is thankful that his sketching allows him to take himself off when he is in need of quiet and solitude.

Ralph's pragmatic nature ensures he makes the best of every opportunity that comes his way and is clearly an asset when things go wrong. And they do. His amiability forges friendships and is beneficial in getting those all important appointments with the generals.

His appraisal of the generals is enlightening and makes these men more than just names in a history book. As subject matter for his painting, he assesses their best features, their natures, how best to show their individuality on canvas and their placement in his final composition; whether to use water colours or oils for the preliminary studies. Naturally, colour is important and Ralph's musings as to the right shade of red for the uniforms: the merits of vermillion or carmine, a highlight of white or a touch of yellow there, makes it so easy to envisage each portrait that you can almost smell the turpentine and linseed oil! He must also pay attention to other important details. To paint a hat wrong or make an error in the grouping of buttons on a uniform jacket would not only be embarrassing, but could possibly earn him the enmity of the War Office.

The predicaments that Ralph gets himself into and how he manages to escape disaster will make you smile and shake your head. Of course, it is not all fun and games. He witnesses the more serious side of war when the French are engaged at Porto and Talavera, mourns the loss of a comrade and also participates in the auctioning of a fallen officer's belongings.

Ralph is not a conventional hero, but you can't help but love him as he stumbles from one calamity to the next. There are a couple of surprises towards the end when it seems Ralph's luck has finally run out. All I'm prepared to say is that the ending couldn't have been better.

I'm a fan of Napoleonic War fiction, but I've not read a novel that approaches events from such an unusual and entertaining perspective as Artist on Campaign. Caroline Miley has combined art and history in a most appealing way. This is one of the best books I've read this year!


Read more
One person found this helpful
Helpful
Comment Report abuse
See all 1 customer reviews
Write a customer review
Get FREE delivery with Amazon Prime
Prime members enjoy FREE Delivery and exclusive access to movies, TV shows, music, Kindle e-books, Twitch Prime, and more.
> Get Started
Back to top
Get to Know Us
Make Money with Us
Let Us Help You
And don't forget:
© 1996-2020, Amazon.com, Inc. or its affiliates