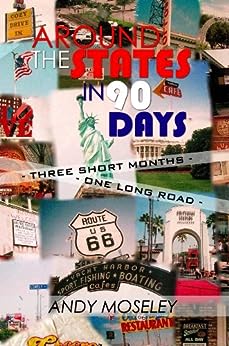 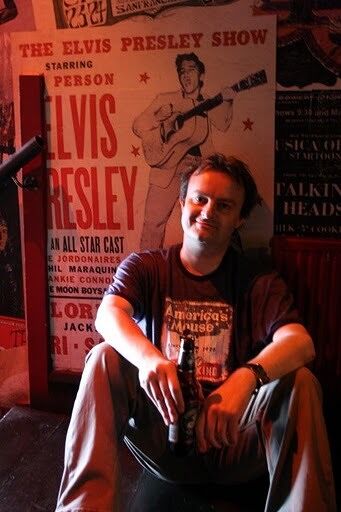 Around the States in 90 Days Kindle Edition

Andy Moseley is an author and playwright who was born in Walsall in the West Midlands. His first book, &quot;Around the States in 90 Days&quot;, was published in 2009, and tells the story of his 2006 attempt to see as much of the States as possible in three months.

Since completing the book, Andy has written several plays including &quot;Are You Lonesome Tonight?&quot; &quot;Casual Encounters&quot; &quot;After We Danced&quot; and &quot;A Beginner's Guide to Populism&quot; which have enjoyed highly successful runs at Edinburgh, Buxton, Henley and Camden Fringe Festivals. &quot;Are You Lonesome Tonight?&quot; has also had three productions in Memphis in 2015, 2016 and 2019. His latest play Make-up was due to premiere at Brighton Fringe in May 2020. Where and when it will now premiere is in the lap of the Covid gods, but some work in progress clips will be available online in May.

For further information on the book and the plays go to www.nologoproductions.com or www.andymoseley.com

3.7 out of 5 stars
3.7 out of 5
13 global ratings
How are ratings calculated?
To calculate the overall star rating and percentage breakdown by star, we don’t use a simple average. Instead, our system considers things like how recent a review is and if the reviewer bought the item on Amazon. It also analyses reviews to verify trustworthiness.

B. Middleton
5.0 out of 5 stars it was great to read Andys reports
Reviewed in the United Kingdom on 1 September 2017
Verified Purchase
This is a fabulous book.A most interesting read.Having been in nearly all the places Andy went, it was great to read Andys reports.I had to read some of the chapters again because i enjoyed them so much.Very funny,honest and so much detail to read it is to be there Anyone who thinks of doing a road trip in the States should read this great book before they go.
Read more
One person found this helpful
Report abuse

AS
1.0 out of 5 stars Just boring
Reviewed in Germany on 6 May 2013
Verified Purchase
Was so excited reading this book. But I finished 1.5 chapters and stoped reading. The story was just boring and predictable...
Read more
Report abuse

trueGRR
3.0 out of 5 stars Holiday blog
Reviewed in the United Kingdom on 4 March 2012
Verified Purchase
I agree with previous reviewer - basically this is a "wot I did on my hols" written by an amiable but disorganised bloke on a slightly longer than normal holiday. About half way through he obviously felt the text needed to be padded out with a little more research. The trip & the book would have been better if the author had taken time to do this before he left.

Limited to 90 days because he was unaware of US visa requirements and staying in chain hotels it tells you about loads of things that he could not find or had just missed seeing. It's a mildly entertaining read - and if you want a guide on what NOT to do when touring the States then this is it!

Amazon Customer
4.0 out of 5 stars An enjoyable Journey
Reviewed in the United Kingdom on 20 September 2014
Verified Purchase
Found this an enjoyable read. Liked the authors self depracating style of writing, and his humour. As we lived in the States for a couple of years, we'd experienced some of the same things, including not finding anywhere open to eat after 9pm, resulting in a romantic takeaway pizza and 2 bottles of beer in a motel room for our 7 wedding Anniversary! Not a travel guide, but has lots of interesting information in it, coupled with their own personal experiences, giving it a balanced style. I also liked the fact that they were honest enough to say what they didn't enjoy about somewhere, but without being rude about it.
Read more
One person found this helpful
Report abuse

Denise P. Wenman
5.0 out of 5 stars Around the States in 90 days- Paperback
Reviewed in the United Kingdom on 23 October 2012
Verified Purchase
Fantastic book! A bit like a daily diary, but a brilliant read. I myself have visited 32 states in 8 years, hopefully managing to do all 50.
I had experienced many of the things that the author did, so I could really relate to this book.
Read more
One person found this helpful
Report abuse
See all reviews
Back to top
Get to Know Us
Make Money with Us
Let Us Help You
And don't forget:
© 1996-2021, Amazon.com, Inc. or its affiliates