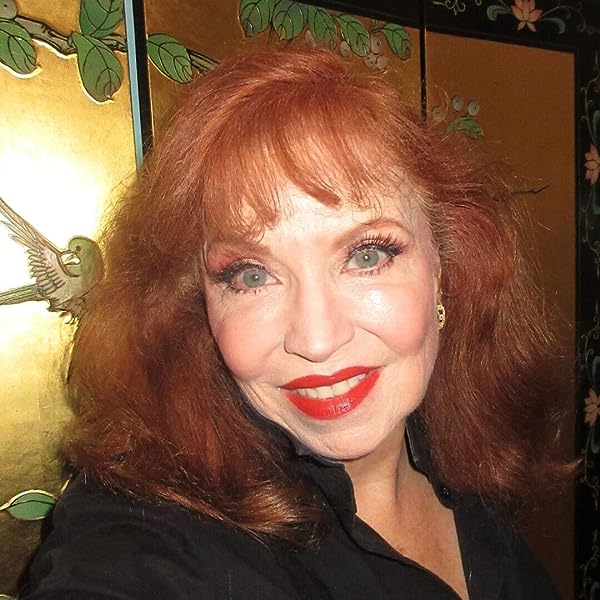 by Ellen Byerrum (Author)
4.8 out of 5 stars 22 ratings
See all formats and editions
Sorry, there was a problem loading this page. Try again.

Trench coats hot or not The author of Grave Apparel proves you can solve mysteries without sacrificing style... Unchallenged and unappreciated, fashion reporter Lacey Smithsonian slips on her trench coat and high-heeled gumshoes to pursue a course in private investigation and a shot at a better job. When a wealthy and erratic D.C. socialite is discovered quite dead outside the classroom, Lacey gets to test those sleuthing skills. Was the victim on her way to share a dangerous secret with Smithsonian And what does it have to do with a missing Louis Vuitton vintage custom makeup case Lacey must mix style with substance to unravel these tangled threads before she, or one of her best friends, gets caught in the sights of a cold-blooded killer
Read more
Previous page
Next page

Page 1 of 1 Start overPage 1 of 1
Previous page
Next page
Start reading Armed and Glamorous on your Kindle in under a minute.

Mystery and thriller writer Ellen Byerrum is a former journalist in Washington, D.C., as well as a produced and published playwright. As challenging as it is, she tries not to repeat herself in her writing, and in pursuit of research and keeping things fresh, she studied for and received her private investigator’s registration for Virginia. She has also researched haunted clothing at the Smithsonian Costume Collections, toured a dying velvet factory in Virginia, and interviewed a host of experts for her books. And while looking into beekeeping and honey making for her latest mystery, she got too close and wound up with a bee sting on her nose.

Her latest book, THE BRIEF LUMINOUS FLIGHT OF THE FIREFLY, is the 1940s Prequel to her Crime of Fashion Mysteries, and features a very young Mimi Smith, the “Great-aunt Mimi” mentioned throughout the series. FIREFLY takes place during WWII in Washington, D.C., in the hot and humid month of June 1943.

THE BRIEF LUMINOUS FLIGHT OF THE FIREFLY is now available for PREORDER!

FIREFLY will be published as an ebook on Dec. 10 and soon after in Trade Paperback and Hardback as well. The book explores Mimi Smith's life in Alexandria, Virginia, and her job working for the government agency, the Office of Price Administration. Mimi soon begins investigating the links between the murder of "magdalens" (also known as ladies of the evening), huge quantities of stolen sugar, illegal alcohol, and their connection to the black market.

Set decades before Lacey Smithsonian plies her trade as a journalist in D.C., FIREFLY explores Lacey’s Great-aunt Mimi Smith’s wartime journey that brought her to Washington, D.C. the parallels between the two women, including their love of fashion and the clues people wear without knowing it, and the origins of Mimi’s trunk full of mysteries, the trunk Lacey later inherits. And both Mimi and Lacey discover they have a passion for finding out how the story ends.

Recently, in the year of the arduous pandemic, 2020, Byerrum branched out from her comic adult mysteries with a new children's picture book, SHERLOCKTOPUS HOLMES: Eight Arms of the Law. Available in hardback and trade paperback!

After retrieving her publishing rights, Byerrum relaunched the early volumes of her Crime of Fashion Mysteries in brand-new ebook and trade paperback editions with gorgeous covers designed by Robert A. Williams. (See below.) The first seven books are currently available as ebooks on various platforms, including Kindle. But never fear, there are more to come. In addition, Byerrum is continuing the series under her own imprint, Lethal Black Dress Press.

Two of the Crime of Fashion Mysteries, KILLER HAIR and HOSTILE MAKEOVER, were made into films for Lifetime Television.

Byerrum's THE MASQUE OF THE RED DRESS, the 11th and latest book in her Crime of Fashion Mysteries, is now available as an ebook and as a trade paperback! MASQUE continues Lacey Smithsonian's adventures as a fashion reporter in Washington, D.C., as she follows the trail of a dangerous crimson costume through the local theatre scene, where stagecraft and spycraft have a lot in common.

And for all those readers who want to see more FASHION BITES--the humorous fashion advice in the Crime of Fashion mysteries--she launched a YouTube Channel, "Ellen Byerrum's Fashion Bites." It's funny, it's fresh, it's Friday Fashion Bites! It's currently on hiatus but it might come back, you never know. There is a link address below, or simply Google Ellen Byerrum and YouTube. https://www.youtube.com/channel/UCvnouFJdA-CTxwzY25gsncA

Byerrum also writes plays under the pen name Eliot Byerrum, and she is a former Washington D.C. journalist. In the pursuit of research for her books, she has toured closets at the Smithsonian, traveled to a dying velvet factory, and attended private investigator school in the Commonwealth of Virginia, earning a PI registration in that state.

Times have been changing in the publishing world for quite a while now, and I am delighted to announce a big change of my own: the relaunch of my Crime of Fashion Mysteries. This heady challenge is possible because I reacquired my publishing rights to the first nine COF books. The series (and my relaunch) begins with KILLER HAIR and DESIGNER KNOCKOFF, which were originally published in 2003 and 2004 by Penguin Putnam, now Penguin Random House. Also available on Kindle are HOSTILE MAKEOVER, GRAVE APPAREL, and RAIDERS OF THE LOST CORSET.

While it was exciting to be ushered into print by one of the Big Five traditional publishers, it eventually became clear that I was heading in a different direction. Because I have heard many sad stories of authors who have not been able to recover their rights, I feel especially fortunate to have accomplished this feat. At present, limited quantities of the original mass market paperbacks can still be found in used bookstores, but Penguin Random House will not be printing any new editions. That is now MY job!

I’m pleased to take this opportunity in the coming months to continue to publish my corrected and updated mysteries as ebooks and in trade paperback format. The new editions feature a much more readable book design and beautifully stylish and evocative covers. The new look now more closely reflects my original intentions for the series and the feel and atmosphere of the stories.

For a change of pace, I went darker with my recent psychological suspense thriller, THE WOMAN IN THE DOLLHOUSE. Best Thrillers calls it "an ingeniously crafted psychological thriller that bewitches on page one and continues to mesmerize until its shocking conclusion. Fans of THE GIRL ON THE TRAIN will love it!"

In addition, a middle-grade mystery, THE CHILDREN DIDN'T SEE ANYTHING, is the first in my projected series starring the precocious twelve-year-old Bresette twins, Evangeline and Raphael. This mystery is based on the first dead body I ever saw. As a ten-year-old future mystery writer, that sight made a lasting impression on me.

And finally, under the pen name Eliot Byerrum, I have published two plays with Samuel French, Inc., one of which, A CHRISTMAS CACTUS, has been widely produced throughout the U.S. and Canada.

More information about my books can be found on my website at http://www.ellenbyerrum.com

My books may be purchased through bookstores and from Amazon.

4.8 out of 5 stars
4.8 out of 5
22 global ratings
How are ratings calculated?
To calculate the overall star rating and percentage breakdown by star, we don’t use a simple average. Instead, our system considers things like how recent a review is and if the reviewer bought the item on Amazon. It also analyses reviews to verify trustworthiness.

dog lover
5.0 out of 5 stars Dog Lover
Reviewed in the United States on 4 April 2013
Verified Purchase
I loved all of the books in this series and can't wait for the next one. The only thing I didn't like were the fashion news articles that would appear throughout the book, usually taking up several pages. Because I was so into the mystery and these had absolutely nothing to contribute to the mystery, I skipped over them. I get that she was a fashion reporter but didn't need to actually read her "articles" unless they contributed to the mystery plot. They would have been better placed at the end of the book rather than detracting from the story within the mystery plot. If you like a good cozy mystery with a little romance and great characters, you'll love this series.
Read more
Report abuse

Dawn Miller
5.0 out of 5 stars Fun,fast paced always enertaining
Reviewed in the United States on 26 July 2019
Verified Purchase
Excellent service.Lacey Smithsonian dresses to the nines in another great Crimes of Fashion Mystery !Armed and Glamourous is the sixth book in the series.
Lacey takes a course as a private investigator and before the first class is over a murder occurs in the parking lot. Was the victim on her way to ask for help ?
Read more
Report abuse

My Three Cents
5.0 out of 5 stars Another winner for Ms. Byerrum!
Reviewed in the United States on 30 October 2014
Verified Purchase
Ms. Byerrum is a great writer and I love all of her books. She's a writer definitely worth reading. I hate to condense her novels; just read them and enjoy them as they are all winners.
Read more
Report abuse

rushriver
5.0 out of 5 stars One of the best!
Reviewed in the United States on 8 October 2012
Verified Purchase
Many of these characters were introduced in previous books in this series, but don't worry, you'll get to know them quickly from their wonderful dialogue. My only complaint is that Ellen yerrum does not write these fast enough. More, more, more!
Read more
Report abuse
See all reviews
Back to top
Get to Know Us
Make Money with Us
Let Us Help You
And don't forget:
© 1996-2022, Amazon.com, Inc. or its affiliates