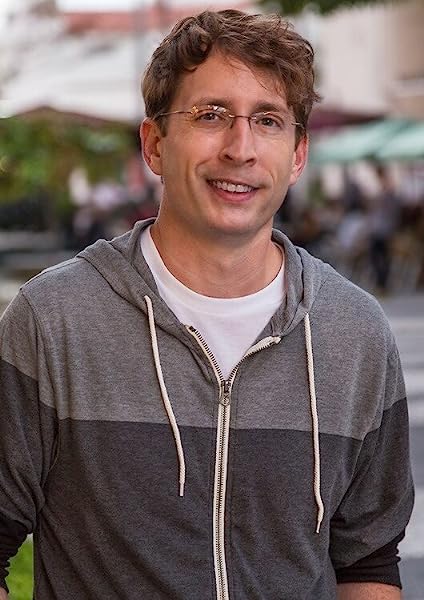 by Shaun David Hutchinson (Author)
4.6 out of 5 stars 615 ratings
See all formats and editions
Sorry, there was a problem loading this page. Try again.

A 2016 Shelf Awareness Best Book of the Year A 2017 ALA Top Ten Rainbow List Title "A beautiful, masterfully told story by someone who is at the top of his craft." -Lambda Literary "Unfailingly dramatic and crackling with characters who become real upon the page." -Booklist, starred review "Bitterly funny, with a ray of hope amid bleakness." -Kirkus Reviews, starred review "Hints of Kurt Vonnegut's Slaughterhouse Five... Highly recommended." -School Library Journal, starred review "Hutchinson has crafted an unflinching portrait of the pain and confusion of young love and loss." -Publishers Weekly, starred review "Wonderfully written... bracingly smart and unusual." -Shelf Awareness, starred review

Shaun David Hutchinson is the author of numerous books for young adults, including The Past and Other Things That Should Stay Buried, The Apocalypse of Elena Mendoza, At the Edge of the Universe, and We Are the Ants. He also edited the anthologies Violent Ends and Feral Youth and wrote the memoir Brave Face, which chronicles his struggles with depression and coming out during his teenage years. He lives in Seattle, where he enjoys drinking coffee, yelling at the TV, and eating cake. Visit him at ShaunDavidHutchinson.com or on Twitter @ShaunieDarko.
Tell the Publisher!
I’d like to read this book on Kindle

4.6 out of 5 stars
4.6 out of 5
615 global ratings
How are ratings calculated?
To calculate the overall star rating and percentage breakdown by star, we don’t use a simple average. Instead, our system considers things like how recent a review is and if the reviewer bought the item on Amazon. It also analyses reviews to verify trustworthiness.

Amazon Customer
5.0 out of 5 stars Excellent, but complex!
Reviewed in the United Kingdom on 28 March 2018
Verified Purchase
Bought as a gift for my son's (15th) birthday, who says it's one of the best books he's ever read. He's a very able reader and had to reread it because he felt like he'd missed bits first time round, but through my enjoyed it both times. It's currently on loan to his English teacher, who has already ordered himself a copy and recommended it to others despite not having finished it yet. Some quite mature themes (and language) so be aware if this might be an issue for you.
Read more
3 people found this helpful
Report abuse

A. Hall
4.0 out of 5 stars Despite the pretty out there premise of the alien abductions
Reviewed in the United Kingdom on 30 October 2016
Verified Purchase
We Are the Ants is a hybrid YA novel, with elements of sci-fi, coming of age and romance thrown in. Henry is struggling at home—his mum hasn’t coped since his dad left, his brother bullies him, and he’s losing his grandmother to Alzheimer’s. He watches his fellow students drive around in flash cars, while his family just struggle to get by. And he lost his boyfriend to suicide. But on top of all that, he’s regularly kidnapped by slug-like aliens, who now want him to decide whether the Earth will end. Thanks to his brother telling everyone in school about the abductions, his fellow students call him Space Boy, and bully him mercilessly. Henry isn’t really sure whether the Earth is worth saving.

Despite the pretty out there premise of the alien abductions, We Are the Ants is mostly a high school coming of age story. It’s pretty dark and brutal at times, more so than average. Henry is dealing with a lot of things, and has an understandably bleak outlook on life. His voice is really distinctive, veering from alienated distance to dark humour. The voice was really the first thing to grab me about the novel. Henry definitely serves up a whole heap of existential angst along the way, as he tries to negotiate his increasingly desperate life, and feelings of self-loathing. There were a few shocks in the story, as Henry punishes himself for his perceived failings with his late boyfriend, or is punished by others or by circumstance. When a new student, Diego Vega, befriends him, he’s really in no state to embark on a new relationship.

There’s a lot going on in this novel, and Hutchinson does justice to the varied complex issues covered, particularly the family’s financial hardship and the various problems that arise from that. There’s really no let up for Henry. (Trigger warnings for bullying, sexual assault and attempted rape.)

It’s a good book. But I was a little disappointed in the ending. It didn’t quite satisfy as a pay-off to all that angst and trauma. And not because it wasn’t a happy ending. It just had too much ambiguity for me, given the novel set-up. However, even given the ending (which I don’t want to spoiler), We Are the Ants is definitely worth a look.
Read more
2 people found this helpful
Report abuse

Greg Dunn
4.0 out of 5 stars 4.5 stars rather than 4, but that option wasn't available
Reviewed in the United Kingdom on 23 April 2021
Verified Purchase
This LGBT YA novel is very well written, but not the easiest of reads, dealing as it does with some hard-hitting issues (literally and figuratively). The mental-health aspects of the story are very well handled, leading to some rounded and memorable characters and situations. Kudos to the author for eschewing a fairytale happy ending and allowing things to play out more realistically.
Read more
Report abuse

Shuan David Hutchinson is a fantastic writer with a great understanding of how complicatd life is and how we are all so different one from another.

5 star reads and defenely raccomad reading this books - it will not disappoint you!!
Read more
One person found this helpful
Report abuse

Qasim
5.0 out of 5 stars Loved this.
Reviewed in the United Kingdom on 9 December 2017
Verified Purchase
'because we are the ants and we'll keep on marching'

it was an incredible reading of loss and how a teenager in particular deal with the death
of a loved one particularly a violent death,
it was really a great book.
Read more
Report abuse
See all reviews
Back to top
Get to Know Us
Make Money with Us
Let Us Help You
And don't forget:
© 1996-2021, Amazon.com, Inc. or its affiliates