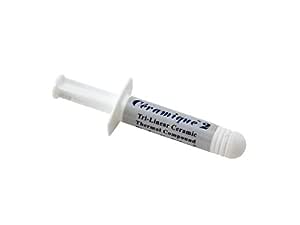 KillerMemz
4.0 out of 5 stars Used to be my go-to thermal compound.
15 January 2018 - Published on Amazon.com
Verified Purchase
I used to use this for everything. CPU, GPU, Northbridge, Southbridge, if it needed it I used it. Very reliable stuff, too, as long as you don't use too much. I used too much once on a Phenom II X4, and I took the heatsink off later to find that it had dried and burned, after about a year of use. It wasn't powdery or moon-sandey, but you could tell it wasn't as moist as it was when I applied it, and there were grey particles from burning. I was more careful after that, and it hasn't happened again, all has been well with devices I've used it on. However, with the rise of the brand CryoRig, I have purchased one of their H5 Ultimate heatsink for my Ryzen build, and it came with a tube of CP7, which sells in 4G tubes for $8.50. I have started using this stuff instead, including a reapplication to an RX 480 that I previously reapplied Ceramique to, almost a half a year ago now, and I have noticed a significant drop in tempuratures with the CP7, from easily hitting 85C on the Ceramique, and throttling, to hovering at 77. So while this paste still does the job, rather well at that, it isn't the best kid in town anymore, when it comes to performance of non-conductive thermal compounds. EDIT- CP7 costs $13.44 on Amazon, the $8.50 price is on Newegg. Price match yourself, Amazon!
Read more

David Martin
5.0 out of 5 stars A thermal paste for ants
8 February 2017 - Published on Amazon.com
Verified Purchase
This stuff is pretty good. I was surprised by how tiny the tube was, only about 2 inches including the plunger. I had recently ordered some really cheap paste from china, 30g for just two dollars. It was okay for low tdp hardware like my amd athlon II dual core and my geforce 210 in my HTPC, but I recently put some on my gaming computer's cpu. Now, my gaming computer has an Intel Xeon w3690 @ 3.4 GHz with 6 cores and 12 threads, and a tdp of around 180 watts. This thing puts out a lot of heat, with the cheap chinese stuff I was idling at 55 C and under about 60% load playing Fallout 4 I was seeing temps in the mid 70's. I ordered this and it came yesterday, so I cleaned off the cheap stuff, and put some of this on. I did a few stress tests with Prime95 to "burn it in", and let it sit overnight completely off so that everything can set. Today when I turned on my pc I saw my idle temp was 38 C! I am running Prime95 as we speak and my CPU is at 100% load, my temp with the CPU fan ramped up is 71-72 C, so all in all a definite improvement. These temps are completely fine for this chip, don't be concerned, it is quite a bit different than the consumer desktop chips most of us are used to and I am not seeing any thermal throttling while under full load with this temp, it's running at the full boost clock of over 3.5 GHz which is fantastic. I believe these old xeons have max operating tems in the high 90's. The previous temps were within reason, but because of the higher than normal temps my cpu fan was constantly ramping up to 100% and it is very loud, so I basically got this to prevent my fan from always being at max RPM when playing anything. I highly recommend this compound, it works quite good.
Read more
2 people found this helpful

William Brooks
5.0 out of 5 stars Huge difference over regular thermal compounds
30 April 2015 - Published on Amazon.com
Verified Purchase
My issue was that my FX-8350 was running 65+ deg C under minimal load with the stock fan/cooler. I installed an Arctic Freezer 7 Pro v2, but temps only dropped to 60-62 degrees under full load. I removed it, cleaned off the thermal paste that came pre-applied on the unit, and applied Arctic Silver Ceramique 2 Tri-Linear Ceramic thermal compound. That made a huge difference -- after the recommended break-in period and several on-off cycles, temps dropped to 50-55 max while doing video conversion at 100% load on all 8 cores. Highly recommended product - but be sure to allow break-in time and several cycles per the instructions. When I first put the cooler back in, temps only dropped to 58-60 degrees average, peaking at 62 under full load. But as the break-in continued, the temps gradually dropped. Temps are now around 48-50 after two straight hours of COD Advanced Warfare.
Read more
5 people found this helpful

Terrance
5.0 out of 5 stars Effective, Safe, Simple to Use!
14 December 2012 - Published on Amazon.com
Verified Purchase
I've used Arctic Silver Ceramique for years because it offered an excellent combination of performance and value, and I was pleasantly surprised that Arctic Silver updated it. In terms of performance, Ceramique 2 seems to be a bit better than the original, though it's still behind the top silver-based thermal interface materials. Absolute thermal performance is not the whole story, however, and where Ceramique really stands out is the fact that it's completely electrically non-conductive and non-capacitive so there's virtually no risk of damaging your stuff by accidentally applying too much, etc.

To get the most out of Ceramique 2, you should follow the detailed instructions on the Arctic Silver website. The site recommends different application methods depending on the type of CPU and Heatsink. For example, with Intel Ivy Bridge CPU's you should use the "line method" whereas my Phenom II needs the traditional "spot in the middle" approach. The site also describes how to prepare a CPU and heatsink prior to applying thermal paste to improve effectiveness.

I bought this particular tube to upgrade the thermal paste in a laptop. With the introduction of Intel's Turbo Boost and AMD's Turbo Core, improving a laptop's cooling solution can lead to very tangible PERFORMANCE increases since the maximum boost frequency and time spend while under turbo boost is a function of current, power, and temperature. By reducing the overall CPU temperature under load, the boosting algorithms allow either even higher turbo boost speeds (up to the maximum) or longer boost duration (possibly indefinitely).

Notes:
1) Thermal paste is secondary to having a clean, flat, and smooth mounting surface and sufficiently high (but not excessive) mounting pressure. Ceramique is better able to deal with higher mounting pressures due to it's higher viscosity.
2) Ceramique 2 is rated down to -150 C, which makes it suitable for use with more extreme forms of cooling such as phase change, dry ice, etc.
3) The 25g Tube is a better value than the 2.7g, though the 2.7g tube is good for ~10-15 applications. This really is a case of your mileage may vary. Ceramique and Ceramique 2 don't really dry out and seem to have a long shelf-life.
Read more
5 people found this helpful
Go to Amazon.com to see all 147 reviews 4.7 out of 5 stars
Get FREE delivery with Amazon Prime
Prime members enjoy FREE Delivery and exclusive access to movies, TV shows, music, Kindle e-books, Twitch Prime, and more.
> Get Started
Back to top
Get to Know Us
Make Money with Us
Let Us Help You
And don't forget:
© 1996-2020, Amazon.com, Inc. or its affiliates