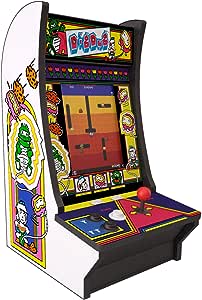 Brace yourself to be plunged back in time to an era of adrenaline pumping, old school fun with Arcade1Up as it brings iconic gaming back to you. Whether you are a retro junkie or curious to check out the hype this is the perfect way to enjoy arcade play within your home, dorm room or office.Arcade1Up Countercades are available in multiple exciting versions that feature a table top design with commercial grade construction and coinless operation. All the machines feature original artwork of all-time iconic games. With immersive full-color hi-res displays and sounds, and full size joysticks and control buttons setup, you are looking at endless hours of gaming!Arcade1Up Dig Dug:Relive the glory days of arcade gaming in the comfort of your own home with Arcade1Up's Dig Dug at home Countercade!Jump back to the 80s, grab the joystick and prepare yourself for Arcade1Ups Dig Dug Countercade. You are Dig Dug, the underground miner. Dig your way underground through the earth and destroy the meanies who lurk below and uproot the prized produce. Destroy the meanies by pumping them up until they burst or by dropping boulders on them, but be careful as these meanies can transform into spooky ghost that will appear out of nowhere to attack.Specifications:Table top designItem Dimensions: 18.5 H x 11.25 W x 12.25 L / ItemWeight: 11.10lbsPackage Dimensions: 21.5 H x 14.5 W x 13.5 D / Package Weight: 13.80lbsMaster Carton Dimensions: 22.5 H x 15 H x 15.5 W / Master Carton Weight: 17lbsContainer Loading: 20GP: 300CTN / 40GP: 620CTN / 40HQ: 696CTN2 Games in 1 (Dig Dug & Dig Dug ll)Upgraded 8" Color LCD screenReal feel arcade controlsCommercial-grade constructionOriginal ArtworkCoinless operationOwner can adjust the volumeOn Screen Game Selection MenuPlugs into an AC outletLegal:DIG DUG&1982 BANDAI NAMCO Entertainment Inc.DIG DUGll &1985 BANDAI NAMCO Entertainment In

F. D. Ancona
2.0 out of 5 stars Disappointed
Reviewed in the United States on 30 September 2019
Verified Purchase
I had been very excited when I had seen this product released and ordered one immediately. I was packed well and upon first unboxing it seemed like a quality product. The case was nicely constructed and graphics were perfect. But then I touched the controls and it was immediately apparent they had gone with cheap buttons and joystick. As stated in the other review the joystick was just not responsive at all and prone to stick. That wasn't a total show stopper as they could have been upgraded with more quality controls. The display is what made me return it. It was a cheap TN display, very poor viewing angles, and very muted colors. It was also not very bright. Why go thought the trouble of making this machine when you're not going to deliver on the performance and overall experience? The sound was clear and loud and actual software was spot on - authentic original ROM and loaded fast. What a shame.
Read more
10 people found this helpful
Helpful
Sending feedback...
Thank you for your feedback.
Sorry, we failed to record your vote. Please try again
Report abuse

LB
3.0 out of 5 stars Disappointed in the control
Reviewed in the United States on 5 September 2019
Verified Purchase
I was excited when I saw DIG DUG was available in a tabletop form. Was hoping I could get it in the freestanding model. When I finally unwrapped it, I was disappointed int the controls. To difficult to maneuver.
Read more
10 people found this helpful
Helpful
Sending feedback...
Thank you for your feedback.
Sorry, we failed to record your vote. Please try again
Report abuse

Amazon Customer
4.0 out of 5 stars A cool, miniature Arcade1up, for the countertop.
Reviewed in the United States on 21 January 2020
Verified Purchase
There are a few things I disliked about the Arcade1up Counter-cade, are the small speaker, which is way too loud, AGAIN, and the fact the screen is smaller, than in the original run of this product. I'm legally blind, and smaller, is a BAD thing. LOL. Now, I have to go back online, and order a 10" Fresnel lens to magnify the tiny little 7" screen.

The controls seemed "ok", I guess. The stick feels awfully loose, but it is at least using the 4 way gate. The buttons are not the clicky type, and there is a deck protector. I checked the manufacturing date. Was produced in April, 2019, which would explain the screen's dingy, unbalanced, grayish appearance in what's supposed to be black.

At least they got the price down to a more reasonable fee.

Not having a real counter to put the game on, which would've put it at arcade height, I put an old guitar amp on a small table, and then placed the arcade1up Counter-cade on that. Was a perfect fit. It's as if the amp were a perfect stand in for a riser. Got the cabinet up, much closer to where the control decks, and screens of the 3/4 Arcade1up cabinets are. Much easier to see, and access from a standing position.

The unit is heavy enough to stay put, even under strenuous handling of the controls. It also came with a set of extra rubber feet.

There's still room on the little table for two more Counter-cades, one on each side of the table, where there are chairs. I'll leave the next two Counter-cades on the table, for seated players.

Sure wish Arcade1up would give us back the 8" display. Oh well.

I only really got this one, because it's the only variant of cabinets Arcade1up is going to produce Dig Dug on.

I do like that Arcade1up included Dig Dug II.

There is no assembly to do. Just plug it in, and play. :)
Read more
2 people found this helpful
Helpful
Sending feedback...
Thank you for your feedback.
Sorry, we failed to record your vote. Please try again
Report abuse

Jeff
4.0 out of 5 stars Great Looks, Small Screen
Reviewed in the United States on 19 February 2020
Verified Purchase
I have multiple cabinets from Arcade1Up, but this was my first countercade.

At the MSRP, I feel that it’s a bit on the pricey side...but if you look around, you’ll find it for significantly less. I got mine for half the MSRP, and at that price it’s a good deal, in my opinion.

The art is fantastic. Emulation works well. The controls seem solid enough. The screen could be a bit larger, but it looks nice enough.

Overall I like the product. I purchased it more for the art than anything else, and in that respect it’s amazing. That said, it is an arcade cabinet, so I feel that the screen size and the normal price hold it back from being a five star product.
Read more
Helpful
Sending feedback...
Thank you for your feedback.
Sorry, we failed to record your vote. Please try again
Report abuse

Kubey Hunter
5.0 out of 5 stars The authentic Dig Dug experience.
Reviewed in the United States on 28 October 2019
Verified Purchase
Tiny, beautifully crafted, and totally legit. The controlls are smooth and play better than the console versions of the game. The first time since I played the original that the novel feeling to it was there. Hats off to Arcade 1Up - keep making these.
Read more
One person found this helpful
Helpful
Sending feedback...
Thank you for your feedback.
Sorry, we failed to record your vote. Please try again
Report abuse
Load more international reviews

Comic Book Fan
5.0 out of 5 stars 1UP mini arcade cabinet!
Reviewed in the United States on 14 February 2020
Verified Purchase
Great addition to my video cabinet collection. Especially for the price. Glad I didn't have to put it together. Fully assembled!
Read more
Helpful
Sending feedback...
Thank you for your feedback.
Sorry, we failed to record your vote. Please try again
Report abuse

Antuaniece C.
5.0 out of 5 stars Awesome game for grandson
Reviewed in the United States on 1 March 2020
Verified Purchase
Great Item for my 5 year old grandson...he loves it. I was a surprises by the size, although it's a counter top game the specs are much smaller than the regular sized Arcade 1 up...just $50 less
Read more
Helpful
Sending feedback...
Thank you for your feedback.
Sorry, we failed to record your vote. Please try again
Report abuse

Johnnie b
4.0 out of 5 stars Great, but have a flaw.
Reviewed in the United States on 24 February 2020
Verified Purchase
To sum it up, I like it. But the screen is too small. If you know how to mod a 1 up arcade machine then I highly advise you to. (Especially I you get the centipede/missile command, or Pac-Man/ Pac-Man plus machine) But, all and all not bad love the cabinet design.
Read more

Helpful
Sending feedback...
Thank you for your feedback.
Sorry, we failed to record your vote. Please try again
Report abuse