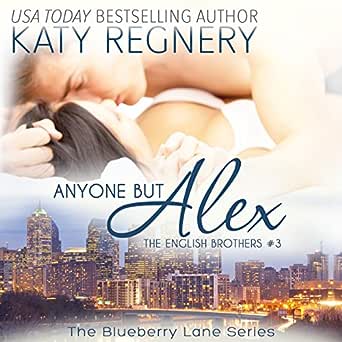 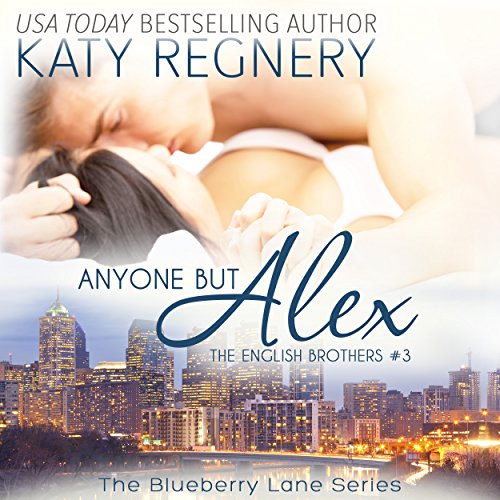 Anyone but Alex: The English Brothers #3: The Blueberry Lane Series

4.6 out of 5 stars
4.6 out of 5
92 global ratings
How are ratings calculated?
To calculate the overall star rating and percentage breakdown by star, we don’t use a simple average. Instead, our system considers things like how recent a review is and if the reviewer bought the item on Amazon. It also analyses reviews to verify trustworthiness.

S. Baron
5.0 out of 5 stars book 3
Reviewed in Australia on 23 April 2015
Verified Purchase
This again allows characters from book 1 and 2 to interact with the characters of book 3. It is a cute story and delves into the age old saying is love enough. It was well written and although Alex was always a player with a knack for charm, it is Jessica's strength that shines through for me. Really enjoyable
Read more
Helpful
Comment Report abuse

BecP
TOP 1000 REVIEWER
5.0 out of 5 stars Sweet hot and yummy
Reviewed in Australia on 21 January 2018
WOW Alex the English brother best known as the proffessor to teach about laying women and he should know his had plenty. What happens when Jessie Winslow comes home for Christmas holidays sparks fly but will that be enough to keep them together. Come read fall in lo
Read more

Nicci
4.0 out of 5 stars Really liked but didn't love
Reviewed in the United Kingdom on 4 November 2014
Verified Purchase
I enjoyed this book but I'm sad to say that I didn't love it like I loved it's predecessor's.

Why? Well, to start with I got tired really quickly of hearing how much of a manwhore, user, love 'em and leave 'em, wham-bam-thank-you -mam ladylover Alex was. (I got the message the first half a dozen times it was mentioned and my memory really isn't that bad...)

Secondly, Jessie's brothers annoyed the ever-loving crap out of me with their over-protective chest beating. Thirdly, by the time Jessie grew a pair and told her brothers where to swing I had very little patience for her. Forth, and final, reason - just as I was beginning to like Jessie she bottles it and runs crying, breaking Alex's heart (and her own).

Alex. He was adorable. It was incredibly sweet how he didn't think he was good enough for Jessie because of his past and tries to both give her what she wants and protect her from his reputation at the same time. I loved watching Alex grow into - I hesitate to say better person, because apart from sticking it in anything that moves, he is a lovely guy but his love for Jessie does make him into a better person. She fills the hole in his chest and gives him a new purpose and makes him happy, which oddly enough made me happy cause he's adorable (and incredibly sexy).

There was also lots of the other brothers in this book, which I really enjoyed. Especially the glimpses of Stratton and Weston...

All in all, it was a really good read that provided many a warm and fuzzy feeling but, there were too many little bits that bugged me for me to love it.

GBG story lover
4.0 out of 5 stars Feel-good romance
Reviewed in the United Kingdom on 24 September 2015
Verified Purchase
I was enjoying working my way through this series. The books are predictable, with sexy lead characters and guaranteed love - perfect quick romantic reads for a busy lifestyle. I also like the fact that as the leading men are all brothers we get to keep up with the couples from the previous books.

I say 'was' enjoying due to a sudden and unexpected price hike just as I was about to purchase #4. Admittedly the books have steadily grown in length, but I still resent paying more for a 232-ish page book than most (longer) books currently sitting in the Amazon top 10 list. I'll continue the series when the price evens out again!
Read more
Report abuse

janey
4.0 out of 5 stars lovely read...
Reviewed in the United Kingdom on 29 March 2015
Verified Purchase
This was so sweet!!, loved both Alex and his Jessie girl, so honest, so refreshing, no mixed messages, no misunderstandings, they were both scared of their intense feelings for each other but they said how they felt, no bulls***, it was so heart warming it made me smile a lot. Loved hearing about the English brothers again and I know that Stratton is up next, but how joyous is this Jessie's brothers are going to get their own books too and I think Brooks is going to be up first. Loving this series.
Read more
Report abuse

Ginger Nut
4.0 out of 5 stars Good Read
Reviewed in the United Kingdom on 13 June 2015
Verified Purchase
I have really enjoyed reading this series of book, like the two main characters a lot. It is not to heavy, just a fun light read and I enjoyed the authors writing style. I would definitely read more of these books and am looking forward to reading the next book.
Read more
Report abuse

sally turner
5.0 out of 5 stars the English brothers series
Reviewed in the United Kingdom on 25 October 2015
Verified Purchase
When a book is part of a series of books I do like to read the series before passing a comment and to anyone looking for a series of books to read I would strongly recommend this series it has everything required a brilliant read
Read more
Report abuse
See all reviews
Get FREE delivery with Amazon Prime
Prime members enjoy FREE Delivery and exclusive access to movies, TV shows, music, Kindle e-books, Twitch Prime, and more.
> Get Started
Back to top
Get to Know Us
Make Money with Us
Let Us Help You
And don't forget:
© 1996-2020, Amazon.com, Inc. or its affiliates