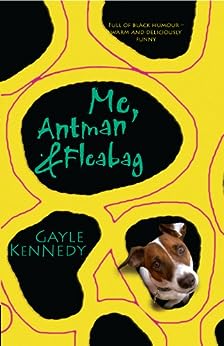 by Gayle Kennedy (Author) Format: Kindle Edition
See all formats and editions
Sorry, there was a problem loading this page. Try again.
Hilarious, quirky characters and wicked black humor abound in this fictional account of contemporary rural Australia. An aboriginal woman, her partner, Antman, and their dog, Fleabag, take off on a spirited road trip across Australia, encountering eccentric aunts, six-fingered redheads, and martyrs to the cause of sheep well-being,enjoying along the way all the good things in lifefamily, laughter, and love. This unique tale offers an incisive and side-splitting look at modern indigenous life and the family and friends thatcomprise it.
Read more
Previous page
Next page
Kindle e-Readers
Kindle Fire Tablets
Free Kindle Reading Apps
See all supported devices

Gayle Kennedy was born in Ivanhoe NSW. She is a member of the Wongaiibon Clan of the Ngiyaampaa speaking Nation of South West NSW. She has had stories published in newspapers and magazines and broadcast on radio, and was the Indigenous issues writer and researcher for Streetwize Comics from 1995-1998. She is in demand at literary events and workshops and has spoken in Australia and internationally on the issue of disability and culture. She has lived and worked in Sydney since 1973. --This text refers to the paperback edition.

Jennifer
TOP 10 REVIEWER
5.0 out of 5 stars ‘Me, Antman and our mongrel, Fleabag, like partyin outside.’
Reviewed in Australia on 12 October 2015
In twenty-two thought-provoking vignettes, Ms Kennedy introduces us to the world of an Aboriginal woman (our narrator, whose name we never discover), her partner Antman and their dog Fleabag. These vignettes are full of quirky characters, of black humour and of reminders that Aboriginal Australia still often remains quite separate from the Australia that many of us occupy.

Our narrator, Antman, and Fleabag travel across Australia. They meet eccentric relatives, including Cousin Moodle, whose love of funerals once has her falling into a grave. They meet Old Mother Howard, a drunk woman with ‘flaky, grey skin she’s always pickin at.’ Old Mother Howard and her husband Old Mick Howard are ‘whitefullas’. While they’re not related to ‘our mob .. all the blackfullas look out for the kids’ because they feel sorry for them. The Howards have six red-haired children, each with an extra finger and toe on each hand and foot.

There are darker stories as well, especially the story of how Bess and Vic met in ‘The Golden Wedding Anniversary’ and in ‘Grandfather’s Medals’. These stories are reminders that equality is still sometimes only a word.

While the language in these vignettes is often colloquial, it’s appropriate for the stories being told. The narrator is having a conversation with the reader, recounting events from her own viewpoint and in her own style. While the style is warm and frequently humorous, humour is part of the observation and telling of the story, not usually an end in itself. It’s a book to read, and to think about.

Ms Kennedy won the 2006 David Unaipon Award for Indigenous Writing for ‘Me, Antman & Fleabag’. This is a book which deserves a much wider readership.

SherryB
5.0 out of 5 stars Brilliant, funny, unique
Reviewed in the United States on 21 October 2013
Verified Purchase
What a surprise! I wasn't sure what to expect from this book but I love it. Kennedy has a unique voice and tells her quirky tales with edgy black humor. Set in contemporary Australia, an aboriginal woman, Antman, and their dog, Fleabag, travel across the country meeting a host of, well, characters (that in some ways I think Flannery O'Connor would recognize -- including six-fingered redheads and odd aunts). Funny, charming, poignant, heartfelt.
Read more
One person found this helpful
Report abuse

Yvonne Pierson
5.0 out of 5 stars Story telling
Reviewed in the United States on 22 April 2013
Verified Purchase
It is no wonder that Gayle Kennedy won the David Unaipon Award. (2006) Story telling is an art passed on from generation to generation, from culture to culture. Gayle's literary form of story telling leaves the reader asking for more of her stories. We are wired for communicating through and learning from stories. "There have been great societies that did not use the wheel, but there have been no societies that did not tell stories" Ursula K. Le Guin. The written word is a powerful tool for translating this art. I hope to see more of Gayle Kennedy's books on Amazon.com
Read more
One person found this helpful
Report abuse
See all reviews
Report an issue
Does this item contain inappropriate content?
Report
Do you believe that this item violates a copyright?
Report
Does this item contain quality or formatting issues?
Report