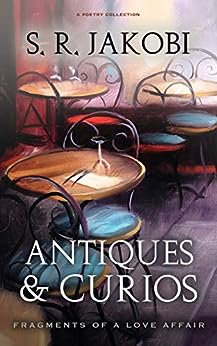 Glynn Young
5.0 out of 5 stars Looking back at a love affair
Reviewed in the United States on 26 May 2020
Verified Purchase
It’s not exactly rare, but it is a bit unusual these days to find an entire poetry collection built around a single story. The last one I recall reading is “The Long Take” by Robin Robertson, some 20 months ago. That was a genre-bending work of fiction, poetry, and crime story that defied classification.

“Antiques & Curios: Fragments of a Love Affair” by S.R. Jakobi is clearly a poetry collection in the conventional sense, but its 96 poems center on one event: a love affair between an older man and a younger woman, work colleagues who almost accidentally stumble into and fall for each other. The poems tell a single, usually chronological story of the relationship – how it begins, develops, matures, deteriorates, and eventually ends. Except it doesn’t end, not really, carried on in memory for decades.

The affair begins after a game of cricket, a chance conversation that both find charming. He helps her avoid a puddle, and imagines himself Sir Walter Raleigh, spreading his cape. It’s a dangerous comparison, one that leads directly to the affair.

Through the poems, we follow a “first time-around” with all of its urgency and passion. The relationship ends, but is renewed in a “second-time around,” less urgent but just as passionate, until it reaches an end that both recognize as the end. But an aftermath follows, because they both work in the same business and they can’t help but occasionally see each other. That’s all the aftermath is – the reigniting of a memory that is barely a flicker of what the reality had been.

In this poem, early in the relationship, the unease and insecurity are already beginning, a harbinger of what is to come.

you still have not phoned,
I wait at our office,
the summer quiet,
industry suspended,
in deep dormancy

I park myself,
unable to work,
tune in the radio,
bandwidth squander,
vacuity and time ill-used,
unrestrained nonsense

cinders in my mouth,
I flee, an impulse for
urgency, take the
train to the city,
to find you

noisy crowds, jostle,
city active with life,
but not you

scanning, tired.
deep within me,
a cry,
frustrated sigh

Jakobi is a late arrival to writing poetry. A former university lecturer, he received degrees in business and languages, a M.A. in history, and a certificate in teaching. He has four poems included in an anthology, “The Poets Symphony” (2020), and is currently working on a sequel to “Antiques & Curios” and a collection of poems illustrated by his own photographs. He lives in England.

“Antiques & Curios” not only tells the story of a love affair, but also conveys a sense of loss without regret after the affair ends. It tells its story from the perspective of old age, looking back and understanding what happened. And it illustrates how an affair in the past can continue to shape one’s understanding of the present.
Read more
Report abuse
See all reviews
Back to top
Get to Know Us
Make Money with Us
Let Us Help You
And don't forget:
© 1996-2021, Amazon.com, Inc. or its affiliates