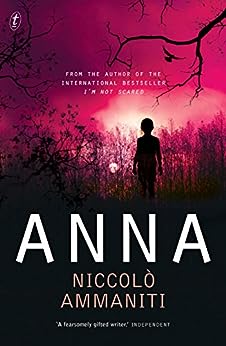 An audacious and highly literary post-apocalyptic novel from the international bestselling author of I'm Not Scared. --This text refers to the paperback edition.

Niccol Ammaniti was born in Rome in 1966. He has written two collections of short stories and six novels, four of which have been translated into English. He was the youngest ever winner of the Italian Viareggio Literary Prize for Fiction for his best-selling novel I'm Not Scared, which has been translated into thirty-five languages. The Crossroads received the Premio Strega Prize in 2007, Italy's equivalent to the Booker Prize. --This text refers to the paperback edition.

'Ammaniti's prose is faultless from the first ... A fearsomely gifted writer.' -- The Independent

‘Ammaniti has created a totally convincing Lord of the Flies-esque world and young Anna, endlessly resourceful amid the horror and chaos, is a heroine to root for.’ -- The Bookseller

'A writer of rigorous imagination and moral subtlety.' -- The Times Literary Supplement --This text refers to an alternate kindle_edition edition.

‘Ammaniti has created a totally convincing Lord of the Flies-esque world and young Anna, endlessly resourceful amid the horror and chaos, is a heroine to root for.’ (The Bookseller)

'Ammaniti's prose is faultless from the first ... A fearsomely gifted writer.' (The Independent)

'A writer of rigorous imagination and moral subtlety.' (The Times Literary Supplement) --This text refers to an alternate kindle_edition edition.
Read more

4.3 out of 5 stars
4.3 out of 5
29 global ratings
How are ratings calculated?
To calculate the overall star rating and percentage breakdown by star, we don’t use a simple average. Instead, our system considers things like how recent a review is and if the reviewer bought the item on Amazon. It also analyses reviews to verify trustworthiness.

MRS M L TATE
5.0 out of 5 stars Page turner
Reviewed in the United Kingdom on 19 January 2019
Verified Purchase
Read this on holiday and bought for my daughter. Great book for my daughter who devoured it in days. Good for adults and teenagers. Just make sure you buy a copy in your own spoken language.
Great service
Read more
One person found this helpful
Report abuse

anna r.
5.0 out of 5 stars a masterpiece to read if you are still in lockdown
Reviewed in the United Kingdom on 26 May 2020
Verified Purchase
This is a great lockdown book! I loved every single page
Read more
One person found this helpful
Report abuse

David B. Davies
5.0 out of 5 stars Five Stars
Reviewed in the United Kingdom on 16 February 2018
Verified Purchase
Excellent book wife loved it. If you are thinking about it just buy it.
Read more
One person found this helpful
Report abuse

Mitchell
4.0 out of 5 stars It didn't live up to the hype it was given.
Reviewed in Canada on 18 August 2018
Verified Purchase
Don't get me wrong, it's a well written, interesting book. Following Anna throughout plague filled world is sometimes touching, sometimes strange and sometime frightening. The only drawback for me was this book was translated from the Italian original (which well done btw) and story takes place on the island of Sicily and its various towns and cities. I've never been to Sicily and when I'm reading a book, I like to immerse myself in the story but I just couldn't this time and not knowing the right pronunciation of the names made it hard for me to really get into Anna's story.
Read more
Report abuse
See all reviews
Back to top
Get to Know Us
Make Money with Us
Let Us Help You
And don't forget:
© 1996-2021, Amazon.com, Inc. or its affiliates