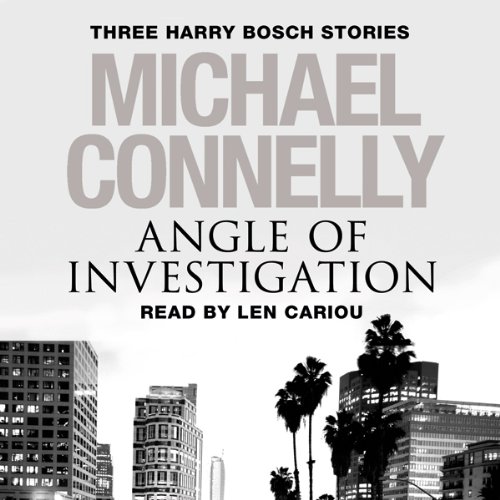 In "Christmas Even", the case of a burglar killed in mid-heist leads Bosch to retrace a link to his past. In "Father's Day", Bosch investigates a young boy's seemingly accidental death and confronts his own fears as a father. In "Angle of Investigation", Bosch delves into one of the first homicides he ever worked, back as a uniformed rookie patrolman, a case that was left unsolved for decades.

Together, these gripping stories span Bosch's controversial career at the LAPD and show the evolution of the haunted, legendary investigator he would become. Utterly unputdownable, they are proof that "Connelly is a crime writing genius." (Independent on Sunday).

Read more
©2011 Hieronymous, Inc (P)2011 Hachette Audio Inc
Previous page
Next page
Learn more about membership
By completing your purchase, you agree to Audible’s Conditions Of Use and Privacy Notice.
Sold and delivered by Audible, an Amazon company
Share

4.2 out of 5 stars
4.2 out of 5
2,493 global ratings
How are ratings calculated?
To calculate the overall star rating and percentage breakdown by star, we don’t use a simple average. Instead, our system considers things like how recent a review is and if the reviewer bought the item on Amazon. It also analyses reviews to verify trustworthiness.

Clifford
5.0 out of 5 stars Back in blue
Reviewed in Australia on 8 August 2021
Verified Purchase
It’s good to see Harry working a case as a detective. I especially like the end of the first story with Harry returning the saxophone. It’s gesture like this that make me feel so connected with this character.
Read more
Helpful
Report abuse

Jonathan Griffiths
1.0 out of 5 stars Harry Bosch at his worst
Reviewed in Australia on 3 November 2020
Verified Purchase
A waste of money. Three very short stories with no characterization and no story.
Read more
Helpful
Report abuse

Kindle Customer
TOP 1000 REVIEWER
5.0 out of 5 stars Classic Bosch
Reviewed in Australia on 7 February 2019
Verified Purchase
3 great little pearls from the master. Connelly never forgets the important details of his favourite character and neither do we, the readers.
Read more
One person found this helpful
Helpful
Report abuse

Hewy
5.0 out of 5 stars Bosch short stories
Reviewed in Australia on 23 November 2017
Verified Purchase
Fast paced - great use of the vernacular - Harry is complex - characterisations are really good. SBS series or On demand.
Read more
One person found this helpful
Helpful
Report abuse

tassiedevil
4.0 out of 5 stars Harry Bosch x 3 - reaching out as usual.
Reviewed in Australia on 26 January 2017
Verified Purchase
Another series of that much admired detective Harry Bosch as he moves through enthralling stories. Easy reads and all add to the mystique of the subject character.
Read more
Helpful
Report abuse

Judy Carruthers
4.0 out of 5 stars CONNELLY
Reviewed in Australia on 5 September 2018
Verified Purchase
Michael Connelly is an excellent writer - I enjoy all his books and highly recommend them
Read more
Helpful
Report abuse

E Evans
4.0 out of 5 stars Three, short, punchy stories - download and enjoy
Reviewed in the United Kingdom on 27 January 2019
Verified Purchase
Three short stories featuring Harry Bosch. If you’re up to date with the Bosch series these sit much earlier in his career when he is still an active detective with LAPD (in fact in one we meet rookie Bosch, who has just joined the job).
The stories are tight knit and logical and cover 3 different suspicious deaths, which needless to say Harry figures out.
I found the Bosch character in the first two stories slightly sanctimonious for some reason. In the 3rd story he is investigating an old case – his first dead body as a LAPD cop. This one felt like it contained the Harry Bosch of today; a much stronger and more rounded character. Since it’s the story that gives the collection its title, maybe the author prefers it too.
Definitely worth the download.
Read more
4 people found this helpful
Report abuse

James Brydon
4.0 out of 5 stars Three great stories to add to the Bosch canon!
Reviewed in the United Kingdom on 19 August 2018
Verified Purchase
This collection of short stories spans the career of Hieronymus "Harry" Bosch with the Los Angeles Police Department. One of them offers an entertaining insight into his second day off the force, as a rookie in uniform, when he and his mentoring partner discovered the body of a middle aged woman who had been bound and then drowned in her own bath, along with her pet dog. That investigation was immediately turned over to the Homicide Division, and Bosch had no further involvement. However, more than thirty years later, after having retired and then been re-recruited to work on cold cases, that death (still unresolved) is still playing on his mind. A potential new lead is found and sets Bosch off on a completely new angle. The other two stories are equally engaging, and resonate with all the characteristics that we have come to savour when Bosch is involved.

I am not generally keen on short stories, feeling that all too often one has no sooner fully engaged with the emerging scenario and characters than it is all over. These stories, however, work excellently. Connelly's spare writing style is as well suited to the shorter format as it is to the novel, and the short stories offer Connelly the opportunity to fill in some of the gaps in Bosch's life.
Read more
3 people found this helpful
Report abuse

LOU
4.0 out of 5 stars Three great short stories
Reviewed in the United Kingdom on 4 July 2016
Verified Purchase
I had been recommended by a friend to read Michael Connelly as I had said that I enjoy Harlen Cobden books. I choose this collection of three stories as I thought it would be good introduction to him and I can say that I was not disappointed. Although only short stories they were long enough to get the feel of the main character of Harry Bosch and were a great taster for what I imagine his longer novels are like. The stories moved at a great pace that meant they were hard to part down with enough going on on each page that keeps the reader interested. If you have not read Michael Connelly books before like me I would recommend this collection and I will definitely be reading more novels by this author.
Read more
3 people found this helpful
Report abuse

Michael Robjohn
2.0 out of 5 stars BEWARE
Reviewed in the United Kingdom on 9 March 2021
Verified Purchase
I had previously bought " The Drop” by the same author. When I bought this book initially I was delighted even knowing they turned out to be short stories but dismayed by the fact that halfway through the content, in other words the second half of the book turned out to be “The Drop” which I had already read. There should be made clear.
Read more
One person found this helpful
Report abuse

K Muir
5.0 out of 5 stars Good reads
Reviewed in the United Kingdom on 8 November 2021
Verified Purchase
Enjoyed reading these three short stories although I guess you are left hoping justice is done in the end. I have read quite a few Harry Bosch books and enjoyed them all. I also enjoyed the series on Amazon Prime just wish there were more.
Read more
Report abuse
See all reviews
Back to top
Get to Know Us
Make Money with Us
Let Us Help You
And don't forget:
© 1996-2022, Amazon.com, Inc. or its affiliates