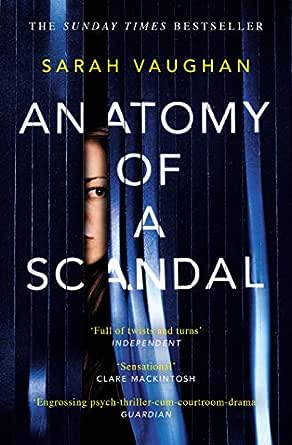 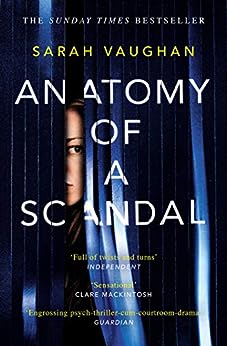 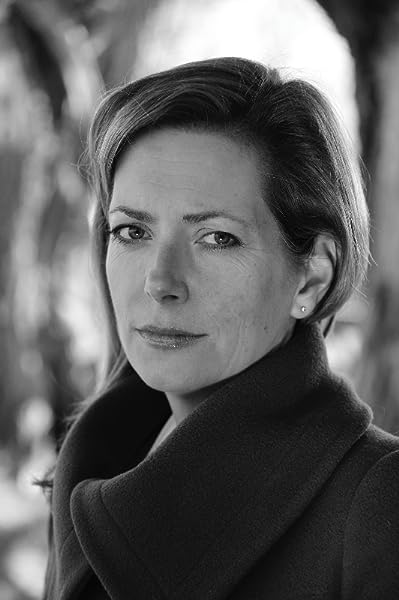 Anatomy of a Scandal: soon to be a major Netflix series Kindle Edition

The Good Wife meets The Affair – fantastic! -- @bleachhouselibrary --This text refers to an alternate kindle_edition edition.

Sarah Vaughan is a former journalist who now lives in Cambridge with her family. This is her third novel.
--This text refers to an alternate kindle_edition edition.

4.1 out of 5 stars
4.1 out of 5
982 global ratings
How are ratings calculated?
To calculate the overall star rating and percentage breakdown by star, we don’t use a simple average. Instead, our system considers things like how recent a review is and if the reviewer bought the item on Amazon. It also analyses reviews to verify trustworthiness.

Julie G
5.0 out of 5 stars Gripping story so skilfully told.
Reviewed in Australia on 18 August 2018
Verified Purchase
Couldn't wait to get back to this book each time I had to stop reading and re-enter real life or go to sleep. It stayed with me and it really mattered. This is a story you get involved in and feel strongly about. The writer seems to care too. I like the different voices she uses and the way she allows us into the thoughts and feelings of her characters and the two time periods are effective and believable. It's the 2nd book I have read recently where the writer explores rape, a difficult topic to hang a story around. However both books are profoundly moving and provide a real insight into the actual experience of rape and all that follows when a woman decides to go to the police. The other book is Fredrik Backman's The Scandal, or Beartown as it is known as in USA. Both highly recommended for male and female readers.
Read more
One person found this helpful
Helpful
Comment Report abuse

Snapdragon
TOP 10 REVIEWER
5.0 out of 5 stars Utterly brilliant
Reviewed in Australia on 24 January 2018
Verified Purchase
I should have gone to bed but alas, this was just so gripping I couldn’t. Had to read on to the end. I agree - it is as good, or better, as Appletree Yard. And very timely too, in these “Me too” days, as it deals with male-female power dynamics particularly re sex. Sarah Vaughan skewers it neatly in one particular passage where she talks about men assuming dominance and why women let them. It’s complicated, and as she says, women need to know they can say no and mean it unequivocally. What’s at issue here is whether charismatic politician James Whitehouse raped a young woman at work with whom he has had an affair. Kate Woodcroft is the QC for the prosecution. She has a big agenda of her own. Her sections are written in the first person. The sections from the POV of James and his aristocratic wife Sophie are written in third person. James, Sophie and Kate were at Oxford. As a scion of the establishment, James was part of a group of privileged, wealthy students called The Libertines. The section describing their drunken trashing of a restaurant is unforgettable. The doings of this group come into play in a hinted-at way throughout the book. James’s friend Tom is now PM. References are made to Tom owing James big-time for something bad that happened. After the trial, Sophie re-thinks her position on a lot of things. What really matters? This is truly gripping, and the writing is superb. Six stars.
Read more
Helpful
Comment Report abuse

carinya
5.0 out of 5 stars Very thought provoking
Reviewed in Australia on 4 October 2020
Verified Purchase
I really enjoyed this book and would highly recommend it. I am looking forward to the Netflix series. The main characters are well thought out and the book club questions at the end provide the reader to delve into the depths of the characters .
Read more
Helpful
Comment Report abuse

Kindle Customer
4.0 out of 5 stars I enjoyed Anatomy of a Scandal from start to finish.
Reviewed in Australia on 13 February 2018
Verified Purchase
The many characters and time changes cleavily transported me effectlessly. This book is a page turner and I am looking forward to Sarah’s next novel.
Read more
2 people found this helpful
Helpful
Comment Report abuse

Jenny Hatton Mahon
4.0 out of 5 stars An age old story with a modern twist
Reviewed in Australia on 6 August 2019
Verified Purchase
An enjoyable story capturing issues of today around power and sex. The key characters are engaging, all be it a bit wishy-washy at times. The story, with its current and historical to and fro kept me reading and wondering until the end.
Read more
Helpful
Comment Report abuse

Rumbii
3.0 out of 5 stars I don’t know how I feel about it
Reviewed in Australia on 8 December 2018
Verified Purchase
The book was ok. I understand the importance of educating readers of the importance of sexual assault but something was missing in it for me.
There were views from different characters but the switch between them wasn’t well balanced. It was hard to know who the protagonist was.
I guess it ended in a realistic way?

Emma
4.0 out of 5 stars Interesting
Reviewed in Australia on 4 October 2018
Verified Purchase
I enjoyed this story. I would have given it 5 stars but I was a little disappointed in the ending. Very well researched and written. I think all types of interests would enjoy ii
Read more
Helpful
Comment Report abuse

Steve Agnew
5.0 out of 5 stars the past is ever present
Reviewed in Australia on 18 October 2020
Verified Purchase
Each new chapter brings to light a bit more of the characters, the story unfolds perfectly, this is a great read and one you will not want to finish...
Read more
Helpful
Comment Report abuse
See all reviews

Marianded
1.0 out of 5 stars Why did I believe the hype?
Reviewed in the United Kingdom on 20 June 2018
Verified Purchase
Absolutely furious with myself for being taken in by the hype of various authors lauding this book.
Genuinely baffled by the many good reviews, found some of the prose almost comically clunky..James's footsteps not his usual brisk assertive tread, his honed waist and so on.
Found the tone preachy shallow and trite..couldn't wait to finish this one and start something better.
Read more
69 people found this helpful
Report abuse

HelenMK
5.0 out of 5 stars Contemporary and timely thriller
Reviewed in the United Kingdom on 16 June 2018
Verified Purchase
This book had all the ingredients to keep me hooked. The timing of its publication could hardly have been better as it plays directly into the #metoo movement and shows, only too vividly, the lasting impact of this type of abuse on a woman's self esteem and ability to form relationships. The characters were well-drawn and convincing even though some of them were the entitled privileged 'types' we think we recognise in today's public life. It was fascinating to get a fictional glimpse inside the heads of such characters whose sense of entitlement is so deeply embedded it skews their whole perspective of other people and the world around them. The plot is sufficiently twisty to keep the reader turning the pages but Vaughan plays fair with her readers (i.e. we are given enough clues to guess the twists but we may or may not do so). Once the reveals are exposed we don't feel cheated. One thing that irked me (and this is no fault of the author as she simply exposed it, if it is true) and that was the old-fashioned 'motivation' given to posh, rich girl, Sophie (wife of politician, James) and her ilk in apparently going to Oxbridge to take a degree in a soft subject with the sole motivation of meeting a posh, rich husband and posh, rich, influential friends and with little intention of working at all, less still in an area that is of any use to society. People like the fictional Sophie are blocking places in top universities that could be given to more deserving, hard working students who weren't born with a silver spoon and might actually do something worthwhile with their expensive education. If that still holds true - that really is a scandal!
Read more
37 people found this helpful
Report abuse

avril phelps
4.0 out of 5 stars Absorbing
Reviewed in the United Kingdom on 1 February 2018
Verified Purchase
If a book makes want to go to bed just to read, it is a success in my mind. This book captivated one's interest, has a style which does not get in the way of the storyline and also contains so me lyrical description which is quite beautiful though somewhat superfluous to the story momentum. I recommend this book to anyone who is looking for a good, understanding read.
Read more
29 people found this helpful
Report abuse

lssypop
5.0 out of 5 stars Anatomy of a Scandal
Reviewed in the United Kingdom on 31 January 2018
Verified Purchase
Great read hard to put down. The plot has many twists and turns and leads the reader on. Believable characters brought together from all walks of life make the story believable. The difference of those who appreciate their success and those that feel entitled is shown clearly. Emotions described can be recognized and felt by anyone who has lived life. Refreshingly written in a straight forward way. Story telling at its best. Must read more by Sarah Vaughan
Read more
14 people found this helpful
Report abuse

A Reader
3.0 out of 5 stars Disappointing
Reviewed in the United Kingdom on 2 May 2018
Verified Purchase
I almost gave up on this around the 150 page mark. I found some of the descriptive writing quite tedious and the storyline uninspiring. However I did persevere and got to the end but wouldn’t give it more than an average rating of 3 stars.
Read more
17 people found this helpful
Report abuse
See all reviews
Get FREE delivery with Amazon Prime
Prime members enjoy FREE Delivery and exclusive access to movies, TV shows, music, Kindle e-books, Twitch Prime, and more.
> Get Started
Back to top
Get to Know Us
Make Money with Us
Let Us Help You
And don't forget:
© 1996-2020, Amazon.com, Inc. or its affiliates