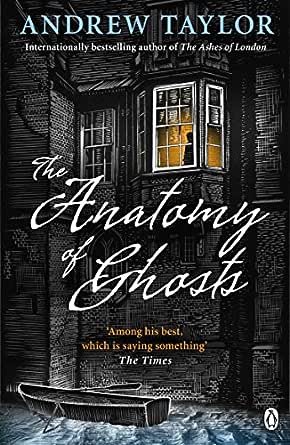 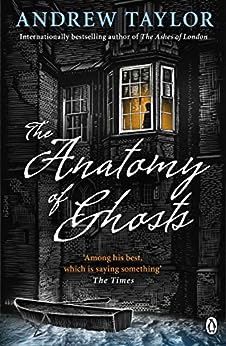 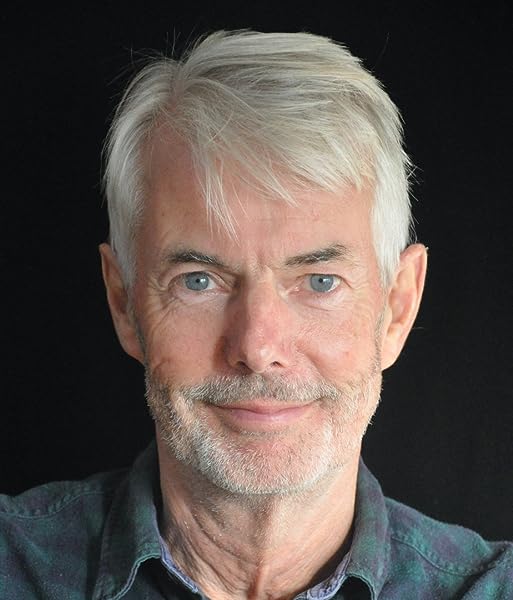 The Anatomy of Ghosts Kindle Edition

Andrew Taylor is a British author best known for his crime novels, which include the Dougal series, the Lydmouth series, the Roth trilogy, and the historical novel The American Boy. He has won the CWA Ellis Peters Historical Dagger Award twice.

John Telfer is best known for playing the character of Willy Pettit in five seasons of Bergerac. He has appeared many times in various television dramas, while his parallel theatrical career has involved him in leading roles at the Bristol Old Vic, the Royal National Theatre, the Old Vic in London, and many regional theaters. He has made hundreds of radio broadcasts, and he plays the part of Alan, the vicar, in The Archers.

The ghost of murdered Sylvia Whichcote is sighted prowling the grounds by commoner Frank Oldershaw. Worried her son is descending into madness, Frank's anxious mother employs rationalist John Holdsworth to investigate the sighting, throwing the uneasy status quo at the college into chaos.

For the sinister Holy Ghost Club governs the privileged life at Jerusalem. Pursued by the ghost of his dead wife, Maria, and Elinor, the very-much-alive Master's wife, Holdsworth must unravel the circumstances surrounding Sylvia's death or succumb to the hauntings himself . . .

4.1 out of 5 stars
4.1 out of 5
72 global ratings
How are ratings calculated?
To calculate the overall star rating and percentage breakdown by star, we don’t use a simple average. Instead, our system considers things like how recent a review is and if the reviewer bought the item on Amazon. It also analyses reviews to verify trustworthiness.

Jennifer Cameron-Smith
TOP 10 REVIEWER
4.0 out of 5 stars `It is strange how soon a life can collapse if the foundations are removed.'
Reviewed in Australia on 11 December 2013
After the drowning death of their son Georgie, John and Maria Holdsworth reacted in very different ways, Maria spent all of her time with a woman who claimed that she was in contact with Georgie's spirit, while John wrote `The Anatomy of Ghosts' - his account of why ghosts are delusion. When finances become constrained the Holdsworths need to move from the house in which they'd lived with their son. Maria refuses, and the next day she too is found dead in the Thames.

John Holdsworth is bewildered and broke, and haunted by his own ghosts. Lady Anne Oldershaw, familiar with his book, offers him employment. While part of the employment relates to organizing her late husband's library, she also believes that he may be able to help her son Frank. Frank, a student at Jerusalem College in Cambridge seems to have lost his mind. Frank believes that he has seen the ghost of Sylvia Whichcote, a friend's wife, and Lady Anne wants John Holdsworth to demonstrate to Frank that it was either a delusion or a hoax. She believes that this will restore Frank's sanity.

Cambridge, in 1786, is a claustrophobic place, and Jerusalem College has its own secrets. Frank was being initiated into Jerusalem's hellfire society, the Holy Ghost Club as the novel opens and the mystery surrounding this club makes it difficult for John Holdsworth to find out what really happened. Finding out how and why Sylvia Whichcote drowned leads John Holdsworth on an interesting, and dramatic, journey of discovery. Few people are who they seem to be, and the class structure - so painstakingly drawn - seems to be a barrier to discovering the truth. But John Holdsworth is nothing if not persistent and if he can't unravel the truth about the death of Sylvia Whichcote, perhaps he needs to reconsider the possible existence of ghosts.

I enjoyed this novel: the fact that John Holdsworth is an outsider to Cambridge meant that we learned about the arcana and inner workings of eighteenth century English university life as he did.
It may slow the pace of the story down a little, but it certainly enriches it.

`I am not the only one who sees ghosts.'

Yorkshire Rose
5.0 out of 5 stars Sublime
Reviewed in the United Kingdom on 18 October 2014
Verified Purchase
Ian so glad I have discovered Andrew Taylor. I just want to devour anything written by him. I am trying to be sensible and read the hundreds of other books on my kindle, some which have been waiting patiently to be read for some time, but am really struggling to disengage from his books.

I absolutely adored The Roth Trilogy (my first encounter with Andrew Taylor) and didn't have high hopes for this as I thought nothing could surpass this utterly exceptional trilogy; but I should have had more faith as this is stunning.

I am just love historical novels and totally immerse myself in them, especially when they are beautifully written and the writing flows effortlessly, like this one does. The book is set in 1786 in a University known as Jerusalem College,

I won't cover any of the story as this has been covered by other reviewers, save to say that I really liked John Holdsworth and his efforts to uncover the truth of recent shocking events which had taken place at Jerusalem.

I was so engrossed in the story I felt I had been transported back to that time and could visualise the terrible living conditions of the poor, together with the dress of the day; I honestly didn't want it to end.

Jenny
3.0 out of 5 stars Not a Ghost Story
Reviewed in the United Kingdom on 17 May 2011
Verified Purchase
Mr Hollingsworth has suffered afew unfortunate events, namely the loss of both his son & wife as well as the loss of his livelihood. He accepts an invitation from a wealthy old lady to travel to Jerusalem College, Cambridge and investigate her son's sudden mental decline supposedly a result of his having seen seeing a ghost. Once there he meets a cast of unique characters all invariably acting in their own self-interest which only serves to complicate matters further.
I had hoped this book would be a good ghost story, complete with spooky goings-on and veiled women floating down old corridors but I was to be disappointed. Ultimately the book reads more like a `Whodunit' that ends with the slightly flat revelation of who the killer is. That said, the characters are well drawn and I was quite impressed by the dialogue, it can't be easy to recreate the rhetoric of 200 years ago but Taylor succeeds. I also loved the love story between Hollingsworth and the Master's wife and this is despite my normally loathing love stories. It was very deftly done with some truly delicate scenes between the two characters beautifully drawn.
Overall a decent work of fiction that's main highlight for me was the exhibition of the snobbery of young rich men and the struggle not to mention servitude of their poor fellow students.
Read more
8 people found this helpful
Report abuse

JK
5.0 out of 5 stars 'The Holy Ghost Club' might have started something!
Reviewed in the United Kingdom on 25 June 2011
Verified Purchase
Cambridge University 1786, Jerusalem College in particular, and a long, hard look at the hedonistic lifestyle of mostly over privileged male students who seem to do anything but study.

Not everyone at the university is wealthy. Some of the students, boys on a scholarship, alongside college lecturers survive on a pittance. This impoverished group are further stressed by bullying and class discrimination handed down from the 'higher echelons'.

Into this mix of over indulgence, poverty and eccentricity arrives the character of John Holdsworth a man recently widowed and now on a mission to find and help one of the students, Frank, member of the 'Holy Ghost Club' and son of an aristocratic family. What emerges from here is a story of ghosts, murder and general 'shenanigans' amongst the university population. Is there a female spectre haunting the university?. If so then why?. That's all part of the mystery and the revelations are slowly and satisfyingly worked into the plot.

None of these characters are particularly likeable with most of them out for little more than self indulgence and self promotion. Their university life, due to the era, is almost entirely male and one dimensional. Women are either mothers, wives, employers or ghosts!. A mentally frail boy and his widowed minder have a puzzle to solve before either is fully recovered. Maybe it's too late?.

I enjoyed this book. The historical background is believable. Moments of dark creepiness built a sense of tension which kept me hooked.
Read more
2 people found this helpful
Report abuse

Jude
5.0 out of 5 stars Another great read from my newest favourite author!
Reviewed in the United Kingdom on 8 October 2018
Verified Purchase
So glad I've discovered Andrew Taylor's books! This is the third of his that I've read so far and I'll certainly be trying more. His style is easy to read, the characters sympathetic, and his books have just enough historical detail to create a good sense of time and place. Recommended for anyone who enjoys historical crime fiction
Read more
One person found this helpful
Report abuse

slug
5.0 out of 5 stars Considered view of loss and the mental spaces it creates
Reviewed in the United Kingdom on 5 December 2020
Verified Purchase
Loved this book, subtle underlay to story that speaks of ghost as loss and emotional impacts rather than overtly brash ghost story. A deeper read that has a considered unravelling while implementing good historical aspects of time and place throughout. Recommend highly if you appreciate an emotionally thoughtful read.
Read more
Report abuse
See all reviews
Get FREE delivery with Amazon Prime
Prime members enjoy FREE Delivery and exclusive access to movies, TV shows, music, Kindle e-books, Twitch Prime, and more.
> Get Started
Back to top
Get to Know Us
Make Money with Us
Let Us Help You
And don't forget:
© 1996-2020, Amazon.com, Inc. or its affiliates