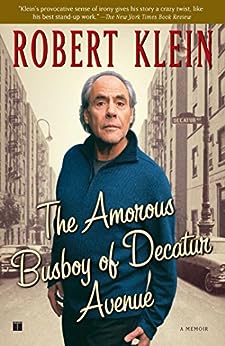 The Amorous Busboy of Decatur Avenue: A Child of the Fifties Looks Back Kindle Edition

''Klein has always been the funniest, most intelligent, coolest comedian. If he would also like to be known as an amorous busboy, who am I to stand in the way?'' --Jerry Seinfeld

''The book is moving and funny...Klein is a born storyteller.'' --New York Post

''A warm and delightful Portrait of the Artist as a Young Comedian from the Bronx. Robert Klein writes with his signature intelligence, wit, and irreverence. This is a hilarious book, and surely Robert Klein is the Don Juan of Decatur Avenue.'' --Wendy Wasserstein, Pulitzer Prize-winning playwright and New York Times bestselling author

''Uproarious opening chapters about his 1950s Bronx childhood and his overly cautious parents . . . Probing not only his own psyche but also the evolution of sexual mores during the 1950s and '60s, he unfurls an array of captivating anecdotes, writing with wry wit and honesty.'' --Publishers Weekly

''A fine and very funny writer…Klein's humor is biting, sometimes scatological, but never bitter, and he reveals an interesting life with this thoroughly enjoyable chronicle.'' --Booklist

''A fascinating, warm, and, of course, humorous account of Robert Klein's early years. I had no idea that he was such a sex addict!'' --Joan Rivers

''Klein's provocative sense of irony gives his story a crazy twist, like his best stand-up work.'' --The New York Times Book Review --This text refers to the mp3_cd edition.

Robert Klein is an American stand-up comedian, singer, and actor whose career has spanned over forty years. He has had an acclaimed career in comedy, on Broadway, on television, and in film. Born in the Bronx, he was a member of the famed Second City theatrical troupe in Chicago in the 1960s. Twice he was nominated for the Grammy Award for Best Comedy Album of the Year: Child of the Fifties (1973) and Mind Over Matter (1974). He received a Tony Award nomination for Best Actor and won a Los Angeles Drama Critics Circle Award for his performance in the hit Neil Simon musical They're Playing Our Song in 1979. In 1993, he won an Obie and the Outer Critics Circle Award for Outstanding Performance by an Actor in Wendy Wasserstein's The Sisters Rosensweig. He was a star of the hit NBC series Sisters and has made more than a hundred appearances on the Tonight show and the Late Show with David Letterman. Notable films include Hooper, The Owl and the Pussycat, Two Weeks Notice, and How to Lose a Guy in 10 Days.

D. Lippert
4.0 out of 5 stars Klein being Klein (A good thing).
Reviewed in the United States on 21 January 2015
Verified Purchase
Klein's ribald and raucous recollections about his early life and career make for amusing and entertaining reading. I wish he had done a bit more name dropping--he does mention Fred Willard and David Steinberg--and a little less describing his sexual escapades. The insight into the old Pocono resorts with their Jewish comedians speaking Yiddish was enlightening, especially to a gentile raised in the Midwest. A nice feature is that Klein includes a map of his old neighborhood with locations of incidents clearly marked. Clearly, the New York of Klein's boyhood is not the New York of today and we should be glad that things have changed.

Easy to read; fun to read and--if you like edgy (think SNL, Second City, Curb your Enthusiasm) the you will probably enjoy reading this book.

DW
3.0 out of 5 stars From Good to Great
Reviewed in the United States on 10 August 2005
Verified Purchase
I love Robert Klein and was really looking forward to this book. But I felt this good book - could have been a great book if not for too much time spent on the same topics - and not enough on others. Very quick, interesting read - but I thought Robert spends too much time on his college years - and not enough time talking about his show biz career - specifically, stand-up, broadway - and in general - his thoughts on celebrities, comedy writing - and all the comedy albums he has done. Maybe too much time in the Bronx, Alfred University, Yale and Second City - and not enough time spent on TV appearances, college concert tours - and his very varied show biz career. Perhaps - he has a book two planned? I think he needs it - because a lot of career was not covered in this book - and I was interested in learning more.
Read more
One person found this helpful
Report abuse

John Aquilegia
3.0 out of 5 stars The Lecherous Busboy of Decatur Avenue
Reviewed in the United States on 22 May 2013
Verified Purchase
After reading a number of chapters, I didn't know if I was reading about the life or Robert Klein or Alexander Portnoy. Robert Klein was one my favorite stand-up comedians when I was in may late teens and onward. He was one of the first observational comics ala Seinfeld. I remember seeing him first on the replacement show for Dean Martin, Comedy Tonight or something like that. It was a relief to see young comedians who didn't do dope and sex jokes (or like older joke style comedians, one-liners) but who could describe the very funny things in life. For instance, his Our Gang routine is still gut-busting hilarious. I found the book overall interesting even with Klein's insistence on recounting virtually every one of his sexual experiences during his young adult years. Now if you were about to read a book about a comedian whose work you've enjoyed enormously over the years, would you like to hear more about the comic describe how he came about his original style or would you like to hear page after page about his sexual conquests? What was that?...you'd like to have read more about his learning his comedic style. How he did it.

Oh yes, Klein tells us how he did it...to the point where after a while when he starts excitedly discussing his plans to have carnal knowledge with yet another bimbo, I simply skipped those sections. I think probably quite a few other readers groaned (no sexual insinuation here) as Klein would begin another what seems like endless forays into sex with some tart. Did Klein think that readers would be enthralled by his constant, overwhelming desire to boink every woman he came (and came) in contact with? And much of his young years involved serious situations including almost being killed by hoodlums and getting into fights with quasi-Nazi idiots.

Much of the book is funny and interesting as Klein cannot not be funny in a variety of situations. Like his summer as a busboy at a Jewish resort, Klein recounts serious situations with the solemnity necessary but still like the great comedian he is, leaves you laughing at his descriptions of the various weird (and sometimes dangerous) people he worked with. But why does he think the people who would be reading his bio would want to hear him recount in excruciating detail his sexual adventures? I don't get it. Was it something his shrink told him to do? I don't know. But like I said, after a while, I simply skipped two or three pages of heavy breathing. And the book ends naturally, with Klein boinking a married woman after suffering the humiliation of being turned down for a tv audition. But eventually Klein did host a summer tv program. Why didn't he talk about that? There's a lot in the book that Klein gives you that's a real page turner, but then he leaves out basically the section of his life when he was successful. I think the hundred (or so it seems) pages of bedroom gymnastics could have been left out and the more interesting details of his professional life substituted.

Book Lover
4.0 out of 5 stars Worthwhile memoir
Reviewed in the United States on 25 July 2010
Verified Purchase
If you are a fan of Robert Klein, you will enjoy this well-written amusing, and engaging memoir of one of our finest comedians. Starting from his early years in the Bronx, we follow him through his academic career, his MANY romantic liasons, professional ups and downs, and some tidbits about celebrities he has met during the way. I was disappointed that it ended when it did...we don't get to the years when he gets married, has a child, and is really at the top of his game career-wise. Perhaps Mr. Klein was too young when he wrote this; however, perhaps we will see a "volume 2" down the road sometime. I hope so!
Read more
Report abuse
See all reviews
Back to top
Get to Know Us
Make Money with Us
Let Us Help You
And don't forget:
© 1996-2021, Amazon.com, Inc. or its affiliates