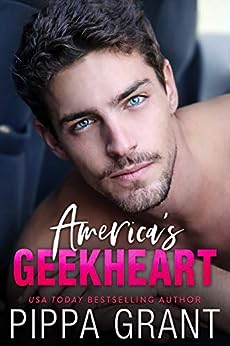 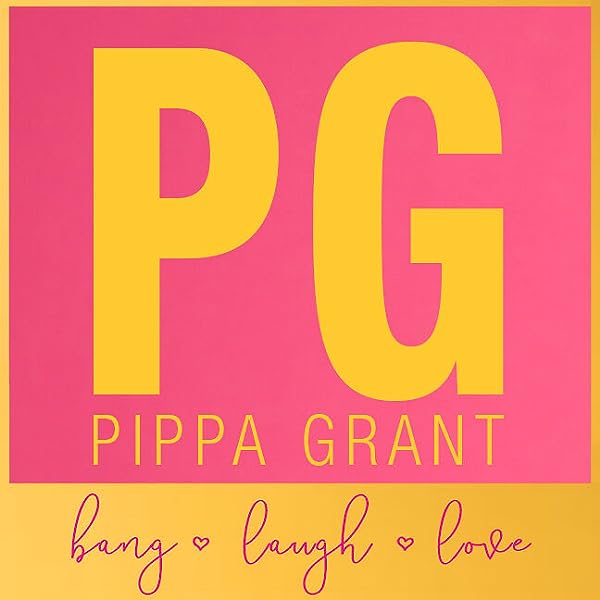 4.7 out of 5 stars
4.7 out of 5
299 global ratings
How are ratings calculated?
To calculate the overall star rating and percentage breakdown by star, we don’t use a simple average. Instead, our system considers things like how recent a review is and if the reviewer bought the item on Amazon. It also analyses reviews to verify trustworthiness.

Brenda Hawkins
TOP 500 REVIEWER
5.0 out of 5 stars Smitten all the way
Reviewed in Australia on 15 February 2021
I love PippaGrant’s writing. I discovered Rom Coms last year and they have taken over my life. Giggling like a teenage girl and holding in my laughs so hard whilst in bed trying not to wale hubby as I snort laugh.
This is what this book did to me. Beck Ryder OMG a celebrity who hasn’t slept around, a guy who doesn’t have a lot of experience and not scared to tell the girl he is falling fall he needs to practice to see if he can give her a “ Double O”
Like Paleeeese Be still my beating heart.
Then there is Sarah or Serendipity or Miss Geeky, or whatever 🤷🏽‍♀️Sarah as Beck discovers after “ Tasering his Ahemmmm” The girl that he falls for “ literally “ at first meet.
Hughesy funny amazing side characters that I hope we get to know more of and that Pirate town of Shipwreck, I can’t wait to get back to.
No spoilers from me as I’m just going to say,
READ IT NOW ❤️ AS IM OFF TO FIND WHAT COMES NEXT 😂
Read more
Helpful
Report abuse

Kindle Customer
5.0 out of 5 stars Loved it
Reviewed in Australia on 19 March 2020
Another great book by this author. He's the guy that has it all until he makes a big mistake tweeting something that was meant to be a joke to his sister and tagging her neighbor . She's the girl with the big secret .
He has alot to do to save his reputation and to do that he acquires her help. They help each other cause while she's boosting how the world is viewing him he's helping her get over her fear of being in the spotlight and living in the past's shadows. I loved the other characters in the book loved her best friends quirkiness and the things she forced them to do cause she believes it helps her team win. and his friends teasing . I would definitely reread this book and read the others in the series.
Read more
Helpful
Report abuse

Carmen Rae
TOP 500 REVIEWER
4.0 out of 5 stars Save the giraffes
Reviewed in Australia on 6 April 2019
I read Flirting with the Frenemy rather randomly on Kindle Unlimited after I kept seeing it everywhere and then I got caught out dying to know what Beck posted on Twitter. So I immediately stalked to find the sign up for the blog tour. And like the last one it wasn't at all what I was expecting.

I loved Beck. Aside from the fact he is a sexy as hell underwear model he was also amazingly sweet and sincere. And I want one. He was so much more than I expected him to be. And his love for his friends and family was so awesome. But the way he felt about Sarah and the way he went above and beyond to prove and show how he felt made him so beautiful.

And Sarah was such a sweetheart. She was so passionate about the things she cared about. And watching her come out of her shell and use her sudden fame to shine a light on the things she thought it should be on was great.

I spent the whole book either swooning at Becks sweetness or laughing at the random humour and I am thoroughly loving the series. I can't wait to see where it's going next but Pippa Grant has now made my must click author list.
Read more
Helpful
Report abuse

Lissanne
5.0 out of 5 stars This year's must read book
Reviewed in Australia on 5 April 2019
I didn’t think I would enjoy a book more than Flirting with the Frenemy, but then I read America’s Geekheart and Pippa Grant proved me wrong.

This book was fabulous in every way that mattered. Beck Ryder, whose sister Ellie and best friend Wyatt are the protagonists of Frenemy, is an ex-boy band member who now runs a multi-billion dollar fashion empire. He does a lot of good and doesn’t flaunt his wealth, and his extended family and friends make sure his ego doesn’t get too big. But Beck makes a big mistake when what he thought was a private tweet to his sister is instead sent to her next door neighbour, Sarah Dempsey, who runs a blog about preserving the earth and all its creatures. Sarah is an environmental engineer who’s been laying low for ten years, hiding a secret she’d rather the world didn’t know.

When she’s thrust into the spotlight, Beck makes her an offer she can’t refuse – she helps him smooth over the mistake that’s made him public enemy number one, and he’ll help her get her causes into the public eye. Sarah tells herself she’s doing it for the good of the animals who depend on her to speak up on their behalf. She’s not falling in love with one of the most famous men in the world, who also happens to be gorgeous, charming and down-to-earth. She’s not.

Beck’s happy to accept whatever help Sarah can give him, because he has a major problem: he’s about a launch a foundation that will benefit thousands of children with a famous sports star, but he needs the public on his side. The more time he spends with Sarah, though, the more he likes her. When he finds out her secret, he takes it in his stride. He’s not falling in love with the quirky, geeky engineer who’s been hiding herself away. He’s not.

This book will make you laugh out loud, cheer, and completely fall for Beck Ryder. One of the best romance books I’ve ever read. You’ll regret it if you don’t read this book. Promise.
Read more
One person found this helpful
Helpful
Report abuse

madtrekkie
TOP 500 REVIEWER
5.0 out of 5 stars What a ride!
Reviewed in Australia on 16 September 2019
This is second story in the Bro Code universe. It can be read as a standalone but it is far more enjoyable to read story begins n sequence. Beck sends a message to his sister Ellie and he goes from American sweetheart to being ostracized. He finds out that the woman he insulted is named Sarah Dempsey and that she is Ellie's neighbour. He visits her unannounced and she tasers him. Could it be love by taser?! Beck is attracted to her. I really enjoyed this story. Beck is such happy character and as Beck reflects it is because he has an amazing family. As Sarah gets to knows him she is increasing attracted to him. This is a slow burn romance, well written and paced. The characters are so believable and they are the kind you wish were in the readers life!; Chemistry, humour and witty one liners; and a dad who threatens him at every turn reminding Beck of what would happen if he didn't treat Sarah right. I loved the story, I cared for the characters and loved their HEA.
Read more
Helpful
Report abuse
See all reviews

all the books are mine!
5.0 out of 5 stars The sweetest of love stories
Reviewed in the United Kingdom on 4 April 2019
Verified Purchase
This book was unexpected in that I thought I was getting an antic driven signature Pippa Grant romantic comedy. Instead I got an achingly sweet romance with a couple of comedy moments. I love that this author is showing her versatility by switching gears for this Bro Code series.

Beck might be one of the nicest romantic heroes I've had the pleasure of reading. He is kind and generous to people. He goes out of his way to correct a mistake, not necessarily for himself, but for those his thoughtless actions might damage inadvertently.
It would be so easy to write him as a self absorbed popstar turned underwear model, but that doesn't allow Sarah our heroine, to fall for an interesting and complex man.

Sarah deserves a true partner, a man who has her back always. She might be quiet and unassuming, but she's an environmental warrior who knows what truly matters.

Beck and Sarah together was a total swoony sigh fest. 😍😍 I loved them together.

As always, the supporting characters, parents, friends, extended family were funny and touching and supportive and real. I need a book about EVERYONE NAMED! Even if it was just a brief name check.

Another triumphant addition to this new series by the ever fabulous Pippa Grant.
Read more
One person found this helpful
Report abuse

melinda swaine
5.0 out of 5 stars Featuring quite possibly the funniest meet cute ever
Reviewed in the United Kingdom on 15 April 2019
Verified Purchase
America’s Geekheart is a freshingly unique, snort-laugh read that I could not put down! Featuring quite possibly the funniest meet cute ever, it’s a definite must read! This book is everything that is amazing, it is sweet, touching, sexy and absolutely hilarious and had me laughing out loud and getting weird looks off family for it lol Pippa Grant has a real hit on her hands with this phenomenal story! I honestly love this masterpiece and I think you will too. Absolutely recommend
Read more
One person found this helpful
Report abuse

Kindle Customer
5.0 out of 5 stars Finds her forever!
Reviewed in the United Kingdom on 9 February 2021
Verified Purchase
When Beck Ryder accidentally tweets Sarah Dempsey instead of his sister Ellie, his world becomes full of insults. When he goes to personally apologise to her, she tazers him before he can get the apology out! Hiding from her childhood, Sarah is used to famous people but she's kept her parents secret from everyone. What happens when Beck proposes he and Sarah become friends to fix the mess his life has become? What happens when people find out Sarah's parents are Hollywood royalty? This book was hilarious with characters you fall in love with and a giraffe in labour! More than a five star read
Read more
Report abuse

MsMerylB
5.0 out of 5 stars Pure escapism
Reviewed in the United Kingdom on 5 April 2019
Verified Purchase
True to Pippa Grant style this is a zany, feel good read. Beck is a gorgeous, goofy man child with amazing friends and family. Sarah is a driven environmentalist running from her past. A real opposites attract romance that was so sweet and heartwarming to read.
Apart from the error about David Bowie being in The Neverending Story instead of Labyrinth, I could find no fault in this zany, goofy amazing read!
Read more
Report abuse

AMC
5.0 out of 5 stars Freakin Awesome!!
Reviewed in the United Kingdom on 17 April 2019
Verified Purchase
Sarah and Beck's story is so well written. It is funny, like laugh out loud funny, it's sweet, it's a slow burn in such a good way but most of all it's just freakin awesome.
This is my new favourite of Pippa Grant's books. Also, Beck is new favourite book boyfriend. He is funny, hot and oh, so, sweet.
Absolutely recommended, as are all of Pippa's books.
Read more
Report abuse
See all reviews
Back to top
Get to Know Us
Make Money with Us
Let Us Help You
And don't forget:
© 1996-2021, Amazon.com, Inc. or its affiliates