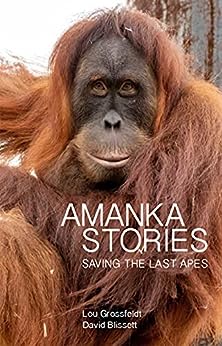 by Lou Grossfeldt (Author), David Blissett (Author) Format: Kindle Edition
See all formats and editions
Sorry, there was a problem loading this page. Try again.
Amanka is a word from one of the languages used by people living in the rural north west of Uganda. It’s a beautiful, rich word that means ‘family’. Yet, in the forests and villages of this part of Uganda – and across much of tropical Africa and Asia – families are at war. In the narrowing margins between forest and farm, human and non-human, there is a growing conflict. A deadly conflict.

The Amanka Book Project has been coordinated by writer, David Blissett and primate curator, Lou Grossfeldt. They celebrate our closest living relatives, by sharing the stories and experiences of the people who are working, fighting, and sometimes risking their lives to save them. The focus is on all ape species (gorilla, orangutan, chimpanzee, bonobo and the gibbon family). These are stories of sacrifice and courage and hope; tears and happiness; love and loss. In each chapter, Lou and David speak with people who devote their lives to the conservation and wellbeing of the apes. This includes scientists, researchers, caregivers, vets, filmmakers and conservation advocates. Many of the stories in this book have never been told before and will give readers a direct insight into the day-to-day heartaches, challenges and joys of working with these intelligent, sentient beings.

‘We wrote this book to raise awareness of the plight of our ape family and to share the stories of the unsung heroes who are trying to help them. All contributors have donated to this project and profits from book sales will be donated to various ape conservation and enrichment programs or projects’ - Lou Grossfeldt and David Blissett.
Read more
Previous page
Next page

Fleur Butcher is an Australian zoo keeper and primate enrichment expert. She began her animal enrichment career at Perth Zoo, working with Australian fauna and then primates. In 1996, she travelled to Borneo as a volunteer assisting at an Orangutan Reintroduction Centre in East Kalimantan. Today, Fleur works as a primate keeper at Melbourne Zoo and is one of Australia's most experienced orangutan caregivers. She is also an enrichment advisor for the Borneo Orangutan Survival Foundation in Indonesia.

Debby Cox AM is an Australian conservationist, animal behaviour expert, zookeeper and qualified vet nurse. Formerly a senior primate keeper at Taronga Zoo in Sydney, Debby has worked around the world - especially in Africa - to save wildlife and wild places from the impact of human beings. She was instrumental in creating the world-renowned Ngamba Island Chimpanzee Sanctuary, near Entebbe, Uganda, and the Tchimpounga Chimpanzee Rehabilitation Centre in the Republic of Congo. In 2009, Debby received the Member of the Order of Australia in recognition for her conservation efforts, especially her chimpanzee conservation work with the Jane Goodall Institute (JGI). Today, she continues her chimp conservation work, representing JGI in countries like Liberia and Burundi.

Bruno Djakou was born in the Cameroon capital, Yaounde. Growing up with a passion for animals, when he was only 17, Bruno got a job as a gorilla caregiver at the Mefou Primate Sanctuary, run by the Cameroon Wildlife Aid Fund (later renamed Ape Action Africa). Bruno worked with orphaned western lowland gorillas at the sanctuary for the next decade, before moving to Australia. He now lives in Sydney with his family.

Ruben Gralki is a master zookeeper and Deputy Head Keeper Primates at Zoo Berlin in Germany. A great ape specialist, Ruben began his caregiving career at Zoo Berlin in 1994 and has been working with primates since 1997. In 2010, he completed a Masters in Zookeeping at Leipzig and is considered by many to be a leading authority on the husbandry and enrichment of great apes in human care.

Khalfan Kikwarley is a local guide working for the Tanzanian Parks Authority. He is basedat Gombe National Park on the shore of Lake Tanganyika. Khalfan has lived in Gombe most of his life and has known Dr. Jane Goodall since he was only seven years old. He has worked with the chimpanzees of Gombe for more than twenty years.

Yvonne Levenston is a contemporary artist, based in Sydney. Her work promotes an appreciation of biodiversity and nature through the power of wildlife imagery, in particular threatened species and especially the great apes. Yvonne draws, paints, prints and sculpts her subjects, exploring new artistic outcomes by combining traditional and experimental methods of art form.

Dr. Fred Nizeyimana is a Ugandan veterinarian specialising in great apes. He studied at Makerere University and participated in mountain gorilla research projects funded by Gorilla Doctors. After graduating in 2005, Dr. Fred worked as acting project manager for the Kibale Eco-health Project in Uganda's Kibale National Park. In 2007, he volunteered at the Ngamba Island Chimpanzee Sanctuary and was later promoted to the role of sanctuary manmanager and veterinarian. Dr. Fred joined Gorilla Doctors in 2010 and currently serves as a field veterinarian in Uganda, performing routine health checks and interventions on mountain gorillas in the Mgahinga and Bwindi Impenetrable National Parks.

Dr. Anton Nurcahyo is the Deputy CEO of the Borneo Orangutan Survival Foundation. He holds a PhD in Biological Anthropology and a Bachelor's Degree in Forestry. He has worked in several conservation roles, including Biologist at the Wildlife Conservation Society, Indonesia Program, Coordinator Orangutan Conservation for the Nature Conservancy, and Orangutan Reintroduction Program Manager for Borneo Orangutan Survival Foundation in Central Kalimantan. In his research work Anton has studied a number of ape species including agile gibbons, siamangs and, of course, orangutans. In 2017, he was an integral part of the scientific team that identified and classified a new orangutan species - the Tapanuli orangutan.

Stany Nyandwi was born in the small African country, Burundi. Today, he is a chimp carer, educator and conservation worker and he has served with the Jane Goodall Institute for more than three decades. Stany's outstanding knowledge, empathy and kinship with chimps enable him to bond with these complex apes in ways few can hope to replicate. Such is his reputation and ability, fellow chimp experts - including Dr. Jane Goodall - refer to him as the "Chimpanzee Whisperer." Stany has worked with chimps in sanctuaries and zoos across Africa and in Europe, Australia and the USA. In 2020, Stany and Dr. Jane Goodall were featured in a multi award-winning short documentary film called Pant Hoot.

Richard Reens is an award-winning American film director and photographer. Since the age of ten, Richard has been shooting and developing his own pictures. Discovered by Neiman Marcus and Estee Lauder, his commercial career was launched when he was only 18 years old. His photographs have been featured in international publications including Allure, Amica, Glamour and Marie Claire. In 2001, he was named one of the top 15 photographers in the world by Archive Magazine. His commercial directing experience includes award-winning advertising campaigns for Mercedes Benz, Hummer, Sony, and 7UP. In 2019, Richard filmed his debut documentary, Pant Hoot, featuring Stany Nyandwi and Dr. Jane Goodall. Pant Hoot went onto win multiple film awards including best short documentary at the San Diego International Film Festival.

Elke Schwierz is a German primate keeper and husbandry specialist. She began working at the Endangered Primate Rescue Centre in Cuc Phuong, Vietnam in 2002. In 2007, she began working for Zoo Leipzig in Germany and continued to work at EPRC as a part of Zoo Leipzig's keeper training program. Fluent in Vietnamese, Elke share her outstanding expertise with local centre staff. She has rescued and overseen the rehabilitation of some of the rarest primates on earth, including Vietnam's endangered gibbon species.

Jacqui Sunderland-Groves is a UK-born researcher and great ape ecologist, currently working for the University of British Columbia in Canada. Holding a Master of Philosophy in Conservation Biology, Jacqui has worked in west-central Africa and Asia since 1995, specializing in great ape ecology, conservation-related research, wild reintroductions and management of complex conservation programs. Jacqui's earlier research focused on the distribution, ecology and conservation of Cross River gorillas in Cameroon, where she established a long-term research and conservation project. More recently, her work extended to the BOS Foundation in Indonesia, where she assisted with the reintroduction of Bornean orangutans in Kalimantan.

Dr. Maryos Tandang has worked as a vet for Borneo Orangutan Survival Foundation since 2009. He studied at Gadjah Mada University, Yogjakarta, Indonesia and while he primarily works with orangutans and other wildlife at the BOSF Nyaru Menteng sanctuary, he also treats domestic animals belonging to local people, such as dogs and cats as well as larger livestock. Maryos is an active member of the IUCN Red List of plants, specialising in the orchid species of Kalimantan. He and his family are recognised cultural artists in Central Kalimantan and have performed in international choir competitions in Indonesia, Belgium, The Netherlands, France, Spain, South Korea and Thailand.

Holly Thompson is a senior --This text refers to the paperback edition.