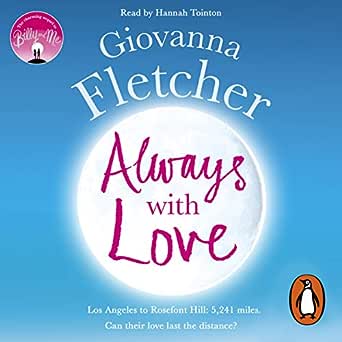 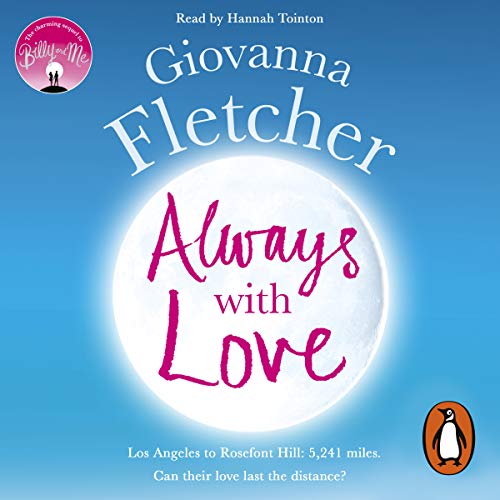 4.5 out of 5 stars
4.5 out of 5
893 global ratings
How are ratings calculated?
To calculate the overall star rating and percentage breakdown by star, we don’t use a simple average. Instead, our system considers things like how recent a review is and if the reviewer bought the item on Amazon. It also analyses reviews to verify trustworthiness.

Samantha Jayne (ABookHaven)
5.0 out of 5 stars Another great read!
Reviewed in the United Kingdom on 21 August 2018
Verified Purchase
After I finished Billy and Me I was satisfied with the ending it was beautiful and I loved it, then she brought out Christmas with Billy and Me which was a short novella and I found myself wanting more and more after that. I had missed the characters so much I just wanted more. So when Giovanna announced that she was getting ready to publish her 4th novel I was so happy, so when she revealed it was the sequel I was jumping up and down. The story focuses on Sophie and Billy as they fly out to LA to see Billy’s family at new year, but things don’t go to plan and Billy decides to stay and film a movie and Sophie goes home alone. She agreed with this but it still comes with problems, the problems of a long distant relationship and Billy being a famous movie start. Although Sophie knows what comes with it, she still struggles with it sometimes.

Sophie’s character grew so much in Billy and Me and there is no exception for this novel, her character is still loving to Billy and her family around her she also will try with people, that’s evident when she meets Lauren and Rachel. I loved Sophie her character she was very sarcastic and it just made me smile.

Billy, he had a few personality trips sort of, when the distance begins to get between them and he is in LA being treated like the famous movie start he starts to turn into an ass, but of course he does change his attitude. I thought that was a good reflection of sometimes fame going to your head and that you do have to bring people down from it.

Billy and Sophie’s relationship, it’s one of those where you wish you could have a love like theirs, it made me feel all warm and fuzzy, but obviously, Giovanna does show the strain and struggle that relationships can have and she does it perfectly. Both of their fears for the relationship and how much they share and want to love each other and just be there. It was perfect.

Lauren was a new character in this book and she is Billy’s sister, Sophie instantly liked her and I did too she was bubbly and just very carefree, Lauren makes a lot of changes in her character, she goes from being not very driven and just not really doing much. To becoming a working girl and having an intern and having ambition it was such a change for her character and it worked really well. Lauren I fell in love with her character. (I wonder if Giovanna could make a book on her?)

I really want to talk about a lot more but it being a sequel I can’t because I will ruin it, one thing to carry on though part of the book was set in England and being that is my home, i could resentate with a lot of things. Although we all complain about how cold and rainy it is, if we ever went somewhere hot we would compain – exactly what Sophie did. Just it’s nice reading a book where I live and can understand the things that a certain character does because I can understand it. Where as the rest of the book is set in LA I couldn’t imagine like being there and doing some of the stuff they do.
Read more
One person found this helpful
Report abuse

Having just come to terms with being the girlfriend of Hollywood actor and A-Lister Billy Buskin and basking in the life they’ve been living in their little Kent village following the engagement of Sophie’s mum a spanner is thrown into their little bubble when Sophie returns with Billy to meet his family and an opportune meeting calls him back into filming and separating the love birds.

With Sophie throwing herself into work at her teashop, she finally employs someone to help her out and they become firm friends – and when old friend Molly’s son Peter turns up Sophie is thrilled to have a reminder of the friend she lost so tragically, and someone with whom she can share memories with. However dealing with the distance from Billy its a question of can her and Peter just be seen as friends?

Throwing in a bit of old school romance as Sophie and Billy exchange letters to try and breach the distance between them, and with Sophie helping plan her mums wedding you can’t help but wish Sophie to can make the new dynamic with Billy work. I was growing concerned in this book that we might be seeing the end of our favourite couple but the end left me wanting more!

You can’t help but think about how the distance in relationships can affect two people and Giovanna manages to beautifully convey the feelings of separation, from loneliness, tiredness, snapping with anger and then the joy of reunion.

I want more now! I so hope that we will have the next chapter on this couple as it seems that there is so much more story to tell with these two.
Read more
Report abuse

Simona Elena
5.0 out of 5 stars LOVE
Reviewed in the United Kingdom on 29 June 2016
Verified Purchase
We are back with Sophie and Billy and I couldn’t be happier. I love their story in Billy and Me, they are such a cute couple and share this unique connection. It wasn’t easy for them in the beginning, but their love is strong.

Now, some time has passed. Sophie has gotten used to being Billy Buskin’s (the movie star) girlfriend. Together they live with her mum and he helps her in her tea shop. When they go to LA to visit his family everything changes.

Sophie gets to know his big family, which is not easy, especially his mother proves to be difficult. She also has a great time with some of them though. And then Billy gets his big chance to be in a movie and he takes it. Sophie flies home alone and manages everything there. This is now testing their love. The distance between them is not easy, although the talk on the phone and write each other letters. They both start thinking about what they really want in life.

Billy is tempted by his celebrity status and Sophie sees that, sometimes in the media first. And Sophie works a lot, spends time with her mum and her mum’s fiancé Colin. Added to the picture then is Molly’s son Peter. Molly was very close to Sophie before she died and now Sophie is even more passionate about the shop. Well, Peter seems to become a great friend, can they just be friends?!

I loved how Giovanna created a story where distance and love were so close. Both Sophie’s and Billy’s feelings came across beautifully and it was wonderful to read about them again. It might seem obvious what was going to happen, but it’s all part of their lives and Giovanna also added other elements to the story, which made it more exciting. Sophie’s mum got her story and I adored reading about the mother-daughter relationship. Billy’s family also added some sparks to it all.

This book might not have the big WOW moment, but the writing is amazing, I got hooked immediately and sometimes less is more.

I would love to read about these two characters again, like five years later or something like that.
Read more
Report abuse

lizzie
4.0 out of 5 stars Good
Reviewed in the United Kingdom on 3 February 2021
Verified Purchase
I bought this book as I was interested in the author and her husband......they have been in the public eye recently..
I am enjoying the book (half way through) but I couldn't detach myself from Giovanna for the first few reads.....I will however buy other books penned by her ...
Read more
Report abuse

Bethany
5.0 out of 5 stars I really enjoyed this book and read it over the course of ...
Reviewed in the United Kingdom on 5 June 2016
Verified Purchase
I really enjoyed this book and read it over the course of a day. Its an easy and pleasant read; nothing too demanding. If you a fan of chick lit then Giovanna Fletcher is adding some lovely books in this genre. This particular novel is a follow up to Billy and Me. I had a real fondness for the characters of that novel and so was delighted to see she had continued telling their story; I wonder if there will be more to follow. Despite being a sequel I do think you would still enjoy the book even if you hadn't read the first story as it does make sense on its own. I thought the addition of new characters added a new dimension to existing ones. The story itself was predictable in parts but still kept me engaged.
Read more
Report abuse
See all reviews
Back to top
Get to Know Us
Make Money with Us
Let Us Help You
And don't forget:
© 1996-2021, Amazon.com, Inc. or its affiliates