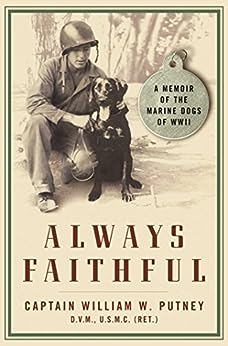 Always Faithful: A Memoir of the Marine Dogs of WWII Kindle Edition

General Louis H. Wilson26th Commandant of the United States Marine Corps and recipient of the Medal of Honor for actions in Guam"Always Faithful" is an interesting and accurate account of the World War II war dogs and the brave and unique ability of their handlers. I was a Company Commander on Guam and can attest personally to their value. I encourage all Marines and others who wish to learn of the value and ability of the war dogs to read and enjoy the book. --This text refers to an alternate kindle_edition edition.

William W. Putney, D.V.M., U.S.M.C. (Ret.), received a Purple Heart and a Silver Star for his actions with the war dogs in the invasion of Guam. During his long subsequent veterinary career, he served as the president of California's Veterinary Medical Associ-ation and, for twelve years, as the Los Angeles commissioner of the Department of Animal Regulation. He lives in Woodland Hills, California. --This text refers to an alternate kindle_edition edition.

4.7 out of 5 stars
4.7 out of 5
132 global ratings
How are ratings calculated?
To calculate the overall star rating and percentage breakdown by star, we don’t use a simple average. Instead, our system considers things like how recent a review is and if the reviewer bought the item on Amazon. It also analyses reviews to verify trustworthiness.

Tige
5.0 out of 5 stars Always faithful
Reviewed in the United Kingdom on 26 April 2013
Verified Purchase
I would recommend this book to any one who loves dogs, or knows and understands anything about what the American Marine Corps went through in the Pacific in WW2. It is a moving account of what life was like for the marines, and a real insight into the uncanny abilities of dogs, which even today we don't fully understand or utilise. It shows just how great a bond there can exist between man and his age old companion, the dog. It is a moving account of how the dogs fared in a hostile environment, how loyal and affectionate they are. It showed how a family pet (for that is what they mostly were) could be trained to be a 'war dog' and with almost all of them, how they could be detrained, and returned to their former owners as pets again. A quite remarkable book.
Read more
3 people found this helpful
Report abuse

Nathan Lawrence
5.0 out of 5 stars Always faithful Excellent Book
Reviewed in the United Kingdom on 25 May 2013
Verified Purchase
Simply put this is a great book that follows the 2nd world war exploits of the author Capt William Putney. That being said it is not all action, its more of an honest memoir of his exploits in both training marine dogs and using them in the pacific war against the Japanese. Just over half of the book relates to training which was in its infancy at the time. The rest of it covers his time in the pacific including his, the handlers and the dogs. It is very well written, brutally honest and very factual, the story it has is carried well. It caused me to both smile, laugh and shed a tear, I enjoyed this book so much I finished it in just over a day. I would recommend it to anyone who is even mildly interested in war memoirs, the pacific theatre, the marine corps and even dogs.
Read more
2 people found this helpful
Report abuse

BAJJ
4.0 out of 5 stars Four Stars
Reviewed in Canada on 7 December 2016
Verified Purchase
Too many individual dog stories of different length and not connected
Read more
Report abuse

W 6s
5.0 out of 5 stars A+++
Reviewed in the United States on 30 July 2017
Verified Purchase
I have read four books on the subject of war dogs. (recently lost my GSD number three and these books helped some). I am convinced this is not only the best of the four but is also the prototype book that the others followed in format. One other difference is that this book is written from the standpoint of an officer commander of war dog soldiers in WW2 (who also happens to be a veterinarian). This book is surprisingly well written. The other books are written from the standpoint of non officer dog handlers in Iraq and Afghanistan or Vietnam. I did enjoy reading all four books, and one of the writers from the mid east conflict noted that he became a war dog handler partly after reading this book. I still miss my GSDs a lot but i think books like these add some perspective although my wife thinks they just make me miss my dogs more. BTW roughly 75% of the war dogs under Captain Putney were Dobermans, 25% GSD's if i recall correctly.
Read more
5 people found this helpful
Report abuse
See all reviews
Back to top
Get to Know Us
Make Money with Us
Let Us Help You
And don't forget:
© 1996-2021, Amazon.com, Inc. or its affiliates