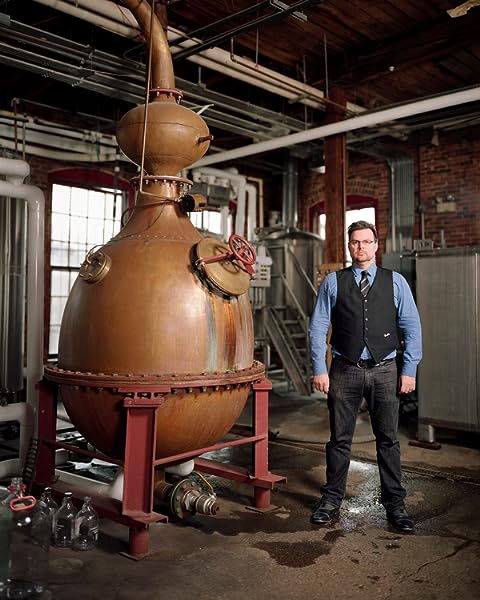 by Darek Bell (Author)
4.6 out of 5 stars 40 ratings
See all formats and editions
Sorry, there was a problem loading this page. Try again.

Darek Bell is the owner of the Corsair Distillery. Darek’s innovative and adventurous spirits have won 92 medals at international spirits competitions. His whiskeys have been praised in publications like The New York Times, Food and Wine, Saveur, Imbibe, Whisky Magazine, Time Out New York, and Maxim.com. Darek was trained at the Siebel Brewing Institute and is a graduate of the Bruichladdich Distilling Academy in Islay, Scotland. One of his smoked whiskey recipes, Triple Smoke, was named “Artisan Whiskey of the Year” by Whisky Advocate Magazine. His first book, Alt Whiskeys, captured the spirit of innovation in craft whiskey and Fire Water will solidify his reputation for being one craft distilling's most creative distillers.

4.6 out of 5 stars
4.6 out of 5
40 global ratings
How are ratings calculated?
To calculate the overall star rating and percentage breakdown by star, we don’t use a simple average. Instead, our system considers things like how recent a review is and if the reviewer bought the item on Amazon. It also analyses reviews to verify trustworthiness.

lianalr
5.0 out of 5 stars Good book
Reviewed in Canada on 4 June 2020
Verified Purchase
Have skimmed through it as it is a gift. Looks like it has some awesome recipes. Writing is well done and book is thorough.
Read more
Report abuse

Matthew Brook
5.0 out of 5 stars Great book on making whisky
Reviewed in the United States on 17 February 2019
Verified Purchase
If your thinking of starting up a distillery or your just making hooch in your garage. This is a great book. The modern whiskey world tells people there are only a few grains and recipes that work. This book explodes that myth. I have tried different grain combinations making whiskeys and there is a world of flavors out there that are to be explored.
Read more
Report abuse

Chris Jaronsky
5.0 out of 5 stars AN ARTISAN DISTILLERS DREAM BOOK
Reviewed in the United States on 27 February 2015
Verified Purchase
This is a great book! The pictures are fantastic. The writing is very good. The recipes seem to be great too. This is a great book for all the aspiring artisan distillers out there. It will get you inspired to test the recipes and to create your own. If you live in another country, one not so backwards as the US when it comes to distilling laws, you will love this book even more as you may be able to distill without jumping through legal hurdles.

I really get the feeling that the author loves what he does. And loves sharing it too. Inspiring book.
Read more
Report abuse

Douglas George
3.0 out of 5 stars A pretty book but not a very useful reference
Reviewed in the United States on 13 April 2016
Verified Purchase
Lots of pretty pictures and makes a nice coffee table book. There are recipes and information about some pretty interesting variations but many use some pretty exotic ingredients and are based on 100s of gallons so need a lot of adjustment for experimental use.
Read more
7 people found this helpful
Report abuse