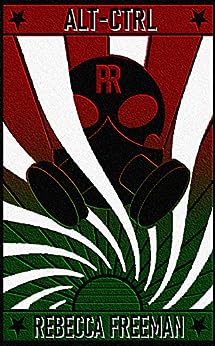 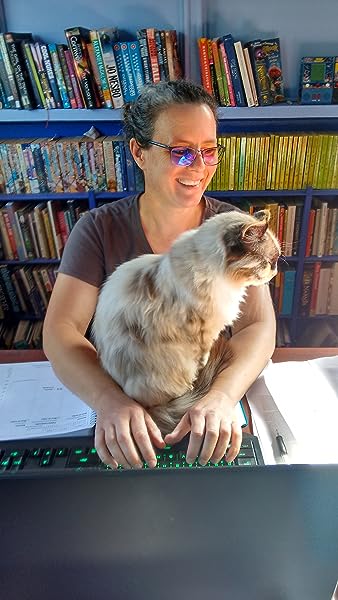 Rebecca Freeman is a freelance editor and writer. She lives on the south coast of Western Australia with her Handsome Sidekick and their too many children and pets. You can find her online at https: //www.rebeccafreeman.com.au/ or follow her on Facebook https: //www.facebook.com/bec.lloyd.freeman or Instagram https: //www.instagram.com/words_by_rebecca/ --This text refers to the paperback edition.

Lily Malone
TOP 500 REVIEWER
4.0 out of 5 stars Interesting Read
Reviewed in Australia on 21 October 2019
This was an interesting sci-fi read about a very near future, which reminded me at times of Terminator (in regards of computers/technology taking over the world), and at others of The Matrix (a world within a world), although while it reminded me of these two sci-fi blockbusters, this is a very different and far gentler story.
The premise is the collapse of the world due to climate change. The timespan really is just thirty or forty years forward from now. A dodgy mega-corporation promises to save the world's population by building climate-controlled 'domes' for the people. Things get murky however, when the director of the dome world (Eva) begins pushing harder for rental payments for 'Domes' and generally, bankrupts Governments and takes over the world (termed The Collapse).
As its influence and power grows, the 'Dome' world begin to pick and choose which Cityzens can and can't live in the Domes. For example, you have to be a certain intelligence to get 'in', old people can't get in at all, some racial types aren't allowed in, and only a few refugees (which is apparently dwindling to none). We hear about euthanasia within the Domes when people reach a certain age. It sounds like people with disabilities can't get in the Domes at all... and I get the feeling if you ruptured an appendix or broke a leg in the Dome, it's kind of 'goodnight'... and you'd get thrown out or recycled into fertiliser rather than be patched up.
So the premise of the story is great.
The writing is solid too and I think the story is well thought out.
My issues (and I don't have many - I did enjoy the read) ran along the lines of: I would have liked to spend more time 'In World' to further explore what was going on in the Dome. Basically, our two lady heroines, Finn and Jhara, escape the Dome at the very beginning of the book to travel to the 'Badlands' (everything outside the Dome and the home of the Resistance movement). My favourite scene was this early one - the prologue and first chapter set the book up beautifully, lots of tension, and a most interesting way that Finn escapes the robotised security patrols.
Once they were in the Badlands however, the pace and action dragged just a little for me. It was still interesting seeing how people were living in communities. I liked the differences the girls discover between structured life in the 'Dome' and life 'outside' (e.g. in the Dome eating is all very sterilised packaged foods always delivered to a Cityzen's 'cube' and meals eaten alone), social activities/interaction not encouraged, no public meetings/debates. Interestingly sex is allowed - there are even rooms for it in the Dome world - although we don't see inside that room - this is not that sort of book!
Outside, the girls discover home cooked 'stews' and flavours, e.g. the smell of a rosemary or lavender plant, and the main character, Finn, is always considering smells (like of a storm or of rain), and even just the scent of a public meeting (group of people). Finn herself is a character written on the spectrum - very high functioning and her tech ability in terms of working computers in the Dome, networking, patching holes in the cyber 'In World' is what got her in amongst the Cityzens in the first place and why she is so important to the Resistance.
Finn is well suited to the orderly life in the Dome (which I think is a subplot the book does well) because she loves solitude, doesn't react well with other people (smalltalk? No thank you!) and life outside the Dome with all its people wanting commitments from her is a constant struggle.
So there is lots of really interesting stuff going on, but for me the central conflict felt rushed (everything is leading to an attack by the Resistance on the Dome) but this gets resolved too easy and I never felt I really had a sense of what the big plan was in terms of how the Resistance thought it could attack the Dome and win this battle.
So, summing up - Alt-Ctrl has got lots to keep a reader intrigued - but sometimes the things I really wanted to know and explore weren't where the story seemed to go. Eva is a very interesting character but she is very much 'off the page' and like her, the InWorld 'Dome' life really exists only very early except for the prologue/chapter 1, and again on return to the Dome at the very end.
Something I did love is that it's set in Australia with references that are easy to pick up, to the Nullabor, Sydney, 'Western City' which I presume is Perth. I am always a big fan of local/familiar areas in my reading.

Kellie
4.0 out of 5 stars Well-written post-climate-crisis novella
Reviewed in Australia on 30 September 2019
4 stars

Alt-Ctrl is a new novella by West Australian author Rebecca Freeman, set years after a global climate crisis causes the collapse of modern civilisation. Finn, a high-level security cyber-engineer, leaves the domed city, the only home she's ever known, to accompany her childhood friend outside into the mythical 'Badlands'. As she sees the world outside her protective cocoon, and meets its inhabitants, she finds out more about where she came from, and in the process, everything she believes is turned on its head.

I found Alt-Ctrl to have an inventive story, compellingly set in a 'post climate crisis' world. The book was very well written, skilfully describing a future-Western Australia that I both recognised and didn't. On the downside, I found the action in the 'Badlands' a little too lacking in tension, and didn't understand what triggered the main character on her path. Why did she leave the domed world and go into the Badlands? She obviously found good reasons to be there when she got there, but what drove her there in the first place was unclear to me.

That said, though, I found Alt-Ctrl to be a well written and entertaining read. 4 stars.

Rebecca
4.0 out of 5 stars Aussie Dystopia
Reviewed in Australia on 16 October 2019
I received an ARC from the author, in exchange for an honest review.

While not my typical genre to read I found this story quite interesting, with a bit of a frightening look at what the future could look like after the climate collapses.

If you like dystopian stories then you will enjoy this. As a novella it keeps the pace moving along. A short prologue, and then you're smack in the middle of action. Not once did I feel bored. I never felt confused. In the author's world the technology is very advanced, which is a good and bad thing. The main protagonist, Finn, is a whiz at the new world technology and is recruited to help the revolution. Her discomfort when she was in the Badlands really came through, and I could feel her anxiety through the pages. There was a slight twist near the end I was not expecting.

I was disappointed to see the book end, as I wanted to find out what happened after.

Overall, a quick read with an interesting storyline. This is the first book I have read by this author, but would definitely read more.
Read more
Helpful
Report abuse

Yvonne
5.0 out of 5 stars Left me wanting more
Reviewed in Australia on 18 October 2019
I thoroughly enjoyed Alt-Ctrl. I thought I'd read enough 'after the apocalypse' stories, but I wouldn't miss this one. Great characters, well paced, and just enough tension. The was even a moment when I gasped out loud. I really hope there's a sequel.
Read more
Helpful
Report abuse
See all reviews
Back to top
Get to Know Us
Make Money with Us
Let Us Help You
And don't forget:
© 1996-2021, Amazon.com, Inc. or its affiliates