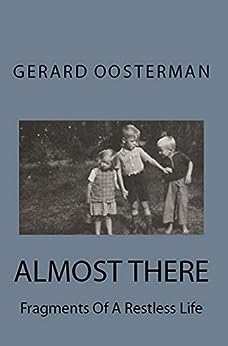 Almost There: Fragments Of A Restless Life Kindle Edition

by Gerard Oosterman (Author) Format: Kindle Edition
See all formats and editions
Sorry, there was a problem loading this page. Try again.
If life is a journey, this Author’s search for the purpose of it started 3am at his birth in Holland on the 7th of August 1940. World War 2 was in full swing. Some 15 years later his parents with their children followed the huge European exodus by boat to a distant sun-drenched Australia.
After a difficult adjustment there, he questioned if the migrant’s dream of own home on a forlorn suburban lot was inspiring enough
The outrageous seduction by his voluminous Maltese landlady while watching Bonanza on the b/w TV might well have been the spark that ignited future creativity.
After his tumultuous early adulthood had settled, he found his future wife in arctic Finland. She helped him carve out a niche in his many artistic endeavors. Soon, three children came about followed by a fantastic vasectomy. This book is about hope, survival, and the overcoming of all.
Through many delightful vignettes, this memoire gives a humorous account of a life well lived.
Read more
Previous page
Next page

Ragnar
4.0 out of 5 stars Almost There
Reviewed in the United Kingdom on 25 May 2016
Verified Purchase
Almost There

This is the autobiography of Gerard Oosterman, a man from Holland who married a lady from Finland and now lives in Australia.That may sound relatively straightforward but there were many twists and turns along the way and the book is engrossing for a number of reasons.

The first of these is his dealings with other people; not just members of his family but an assorted cast of characters including his first landlady, who made moves on the young Oosterman sometimes when her husband was in the room. Considering her husband packed a loaded shotgun, this was high risk behaviour on her part. Then there was the manager he worked for on a trip back to Holland, a man who liked to lean back on his chair while smoking a cigar, leaned back too far and lost his job soon after. This occurred in the brief period when the author thought the thing to do was have a job which entailed wearing a suit. Fortunately, this period didn’t last long. If it had done, we wouldn’t have this book.

A perceptive man, the author happily gives his his thoughts throughout the book, for example, on the cultural differences between Holland and Australia, which seem to be considerable. And his comments are always thought-provoking. I, too, have wondered why lawns are such a big deal - one of the less weighty matters he deals with.

The author writes in what is sometimes a quirky way, and had his book been produced by a traditional publisher it would doubtless have been ‘improved’. This would have been a mistake; who would want an anaemic memoir where the author’s personality is edited out? In my opinion, the expression always fits the bill.

I read the Kindle edition, but I would strongly recommend the paperback version. While the point size of text can be increased on a Kindle the size of the photographs cannot and most of them are too small to make the impact they should. As far as I can see on Amazon, they are larger in the printed version and that is the one to go for. Strongly recommended.
Read more
One person found this helpful
Report abuse

Amazon Customer
5.0 out of 5 stars A good and joyful read, an elixir of stress.
Reviewed in the United States on 22 August 2016
Verified Purchase
A very fine and humorous memoir. It was a joy to read with pathos and joy never far off. An unusual slant on immigration with both acceptance and rejection of the new country put under the loupe. There are not many books written about this subject from the perspective of a teenager growing to adulthood and retirement and still manages to be amazed how it all came about, throw a new light at almost every turn of the page. His seduction by a large Maltese woman while watching Bonanza on the black and white TV alone makes this a very enjoyable book.
Read more
Report abuse

Mark Amey
5.0 out of 5 stars Un-put-downable!
Reviewed in the United States on 4 September 2016
Verified Purchase
This is Gerard's first book. He finds something positive in every experience, whether growing up as a 'refo', or falling in love with his intended. The two books take you from Sydney to Holland and England, with a little bit of Bali thrown in. No one will regret buying this. An example of great writing.
Read more
Report abuse

Steer
4.0 out of 5 stars A must read
Reviewed in the United States on 23 October 2016
Verified Purchase
Brilliant and with dollops of humour
Read more
Report abuse
See all reviews
Back to top
Get to Know Us
Make Money with Us
Let Us Help You
And don't forget:
© 1996-2021, Amazon.com, Inc. or its affiliates