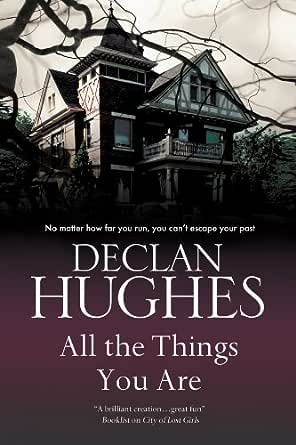 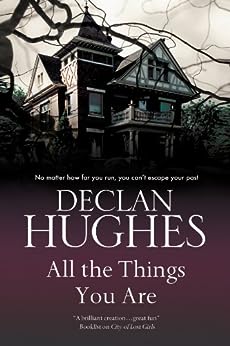 All the Things You Are Kindle Edition

"Cutting back and forth from Claire to Danny to a Madison police officer to an assassin who's been hired by a shadowy Mr. Big, Hughes sticks so close to each one that he manages to create a threatening, baffling world that feels both kaleidoscopic and claustrophobic"--Kirkus Reviews

"Hughes has created an effective puzzle, rife with misdirection and unreliable protagonists"--Publishers Weekly

When her husband and two daughters disappear, housewife Clare Taylor discovers that her ordinary domestic life has been built on a lie.

About to turn forty, her youthful dreams of becoming an actress abandoned, there's no doubt in her mind that suburban wife and mother-of-two Clare Taylor has settled. A wild week in Chicago may have shaken things up a bit, but as she turns her key in her Madison, Wisconsin home on the eve of Hallowe'en, she knows that what happened with her ex was nothing more than a distraction, that this is where her life is.

Except it's all gone. The furniture gone, the house stripped, her husband Danny, her daughters, all gone; no message; no note, nothing. Outside in the dark, searching for a sign, she steps in one: the eviscerated body of the family dog.

By dawn next morning, her supposedly mortgage-free home has been foreclosed against, one of Danny's childhood friends lies dead in her backyard, and Clare is caught up in a nightmare that began with her husband on Hallowe'en night, 1976. A nightmare that reaches its terrifying climax thirty-five years later.
See all Product description
click to open popover

Karen Samuelson
5.0 out of 5 stars At Last!
31 May 2014 - Published on Amazon.com
Verified Purchase
I became a fan of Declan Hughes after reading his novels about Ed Loy, the detective. I have been haunting his site to see if he would write another novel, and I finally got my wish. For me, the shock of Clare finding her house empty, her husband Danny and her children gone, and the link to a past mystery were good reading. I especially liked the depiction of the various characters and the reason behind their behaviors, and the story of a husband and wife finding their way back to each other, both physically and emotionally.

I know it is an overused cliche, but "Please, sir, may I have some more?"

Catherine Siena
1.0 out of 5 stars Trash...Sheer Trash
8 July 2016 - Published on Amazon.com
Verified Purchase
Wasn't what I thought it would be according to the reviews I read Online. The "F-Bomb" was used in this novel of trashy people. Kids will be kids, but the prank that was pulled in this novel, on a Halloween night, made me very glad that I was raised in the slums where blue-collar people taught their children to respect others. People were factory workers, but they never talked like the people in this trashy novel !! It was an Melting-Pot neighborhood of immigrants who took pride in themselves and their behavior. I may have been of the lower socioeconomic class, but the young guys I knew and hung out with were fine kids.
The "hit-jobs" later in the novel took the cake. I struggled to finish the book because my hard earned money was in it. This writer will never get another penny out of me. When I lived in England later in life, I came to know the British and Irish and I can tell you that I met no one who read this kind of trash or COULD write this trash. They were people of integrity, honesty and pride. I NEVER heard the F-bomb used, EVER the entire time I lived there. Duclan Huges must be a different breed altogether. What trash this is. Trashy people making trashy choices ....if this is status quo to you, then read it. It certainly isn't my kind of mystery novel, for sure.

MB
3.0 out of 5 stars All the Things You Are
26 December 2014 - Published on Amazon.com
Imagine coming home to your house expecting to be greeted by your husband and your children. Instead, the house is empty, no family no furniture’s and the dog lies dead in the garden. That is what Claire Taylor finds when she comes home after a week in Chicago. Suddenly her life has turned upside done, but that is just the start.

Something happened thirty-five years ago, that changed four boys and a little girls’ life, something bad. And the past that the boys tried to forget will not be forgotten so much longer.

This book by Declan Hughes made me think about books by Harlan Coben and Linwood Barclay in the way everything wasn’t the way one expected and because of all the twist and turns in the story. It was an interesting story with an explosive ending, but in the end the twist and turning weren't all that surprising. Nothing in the book made me go all “what the hell did that come from” when something was reviled it was more of a feeling of “of course”. I would have liked a story more complex, so complex that you can’t stop reading to find out what happens next. Not that the book is boring, it was a good read. I just never really got that “I-can’t-put-the-book-away-feeling”…

There was one other thing that bothered me with the books; the unknown narrator. Suddenly in the book the narrator turn from one of the character to an unknown person and it really irked me. It really destroyed the flow of the story.

Thank you Netgalley for providing me with a free copy for an honest review!

Read more
2 people found this helpful
Go to Amazon.com to see all 18 reviews 3.4 out of 5 stars
Get FREE delivery with Amazon Prime
Prime members enjoy FREE Delivery and exclusive access to movies, TV shows, music, Kindle e-books, Twitch Prime, and more.
> Get Started
Back to top
Get to Know Us
Make Money with Us
Let Us Help You
And don't forget:
© 1996-2020, Amazon.com, Inc. or its affiliates