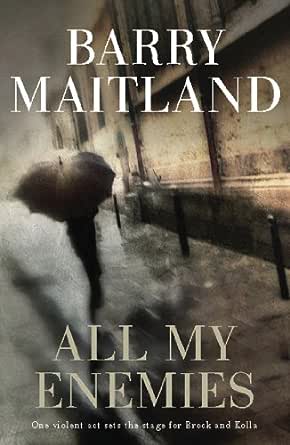 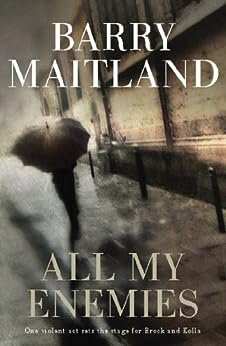 All My Enemies Kindle Edition

Barry Maitland is the author of several mystery novels featuring D.C.I. David Brock and Det. Sgt. Kathy Kolla, including All My Enemies, No Trace, and The Raven's Eye. Born in Scotland and raised in London, Maitland lives in Australia. His work has been a finalist for the Barry Award, the John Creasey Award, and the winner of the Ned Kelley Award. --This text refers to the paperback edition.

"A must-read for fans of the British procedural, with a hair-raising denouement." --Kirkus Reviews

Kindle Customer
3.0 out of 5 stars Disappointing
Reviewed in Australia on 19 September 2017
Verified Purchase
I have read and enjoyed most of Barry Maitland's books but this one lacked depth, commitment and interest. The plot seemed obvious and predictable.
Read more
Helpful
Comment Report abuse

Kindle Customer
5.0 out of 5 stars All My Enemies
Reviewed in Australia on 18 April 2014
Verified Purchase
Yes it is a why-dunnit theatre murder and very intriguing. I have got another one of this authors books downloaded and will see how that pans out.
Read more
Helpful
Comment Report abuse

ntmc1155
4.0 out of 5 stars Interesting!!
Reviewed in Australia on 4 March 2014
Verified Purchase
I can usually peg the bad'un but this had me guessing - also, I'm sure this has been made into a telemovie - kept ringing bells!!!
Read more
Helpful
Comment Report abuse

Cranky
3.0 out of 5 stars not as good as his others
Reviewed in the United Kingdom on 29 June 2015
Verified Purchase
not as gripping as some of his others and not as believable. Felt a bit of a stretch at times. Nevertheless, it hasn't dated and beats much modern detective fiction hands down.
Read more
Report abuse

MPK678
3.0 out of 5 stars If you like PD James you will like this.
Reviewed in Canada on 25 July 2015
Verified Purchase
The development of the story and the pace is slow. I feel like I am reading an old Collin Dexter or PD James book. Let's just say in reads like a pre-Millennial Crime Novel in the English Style.
Read more
Report abuse

Sharon Isch
5.0 out of 5 stars A series of brutal murders in London: What, other than their youth and blondness, is the connection?
Reviewed in the United States on 10 April 2014
Verified Purchase
Barry Maitland, the author of this series, was born in Scotland, lives in Australia and sets his brilliant Brock/Kolla detective mysteries at London's Scotland Yard. The series, currently numbering around 12 or 13 books, depending on which publisher's list you happen to see, seems to have been landing in America, in no particular order (at least as far as I can tell) off and on since the mid 1990s, with the early ones published here by Penguin and the more recent ones by Minotaur. I've no idea why this chronological third in the series--in which Kathy joins Brock's team--seems to have taken so much longer to get here than the others. Okay, all that out of the way, what's the story here?

A beautiful young blonde has just been found brutally murdered in her London bed, with no known suspects or reasons. Some police sleuthing reveals an assortment of other brutal young blonde murders that are all still going unsolved. Finally Brock and Kolla see a possible, if highly unusual connection.

Highly recommended for longtime Brock & Kolla fans. And a good starting place for those new to the series as well.

BBbiblio
4.0 out of 5 stars A good addition to a good series--with a caveat
Reviewed in the United States on 22 July 2017
Verified Purchase
The Brock and Kathy mysteries, including this one, are enjoyable reads. The main characters are engaging. The plot of this (and other books in the series) has a lot of unexpected twists and turns. It is best to read the series in order. But it is also best to take a break between books, because some of the strategies with which Maitland ends his plots are rather similar, which can be disappointing if they're read right in a row.
Read more
Report abuse
See all reviews
Get FREE delivery with Amazon Prime
Prime members enjoy FREE Delivery and exclusive access to movies, TV shows, music, Kindle e-books, Twitch Prime, and more.
> Get Started
Back to top
Get to Know Us
Make Money with Us
Let Us Help You
And don't forget:
© 1996-2020, Amazon.com, Inc. or its affiliates