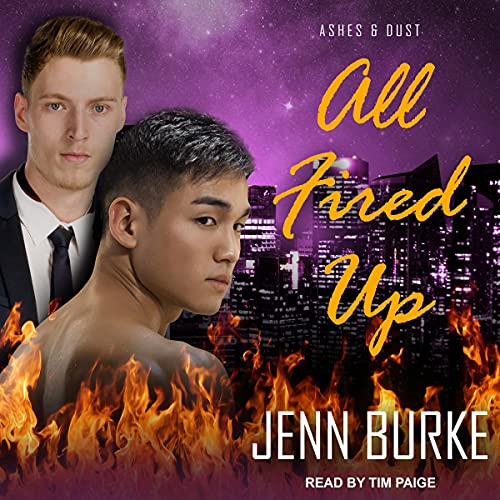 All Fired Up: Ashes and Dust Series, Book 1

Don't miss this riveting and romantic spin-off series from Jenn Burke, author of Not Dead Yet.

Paranormals are dying - all over the city, with no explanation, and only one thing in common: Their magic is missing.

Vampire and private investigator Evan Fournier isn't supposed to be taking on paranormal cases, but when the murderer hits close to home, he agrees to look into it. The last thing he expects is to become a target himself - and then to become irrevocably bonded to the man who just tried to kill him.

With his memory gone and his soul bonded to a stranger, former firefighter Colin Zhang wants to be anywhere else. He doesn't have a damn clue why he just tried to kill Evan, and he didn't even know about magic until just now. The sooner he can get back to his real life, the better. But every time either of them tries to leave, pure agony stops them short.

Forced to work with Evan or suffer the consequences, Colin must excavate the secrets buried in his missing memories while battling two rising threats: the conspiracy behind the murder, and his mutual attraction to the bond mate he never wanted.

Switch between reading the Kindle book & listening to the Audible narration with Whispersync for Voice.
Get the Audible audiobook for the reduced price of $24.37 after you buy the Kindle book.
Final days - Don't miss out!
Learn more about membership
By completing your purchase, you agree to Audible’s Conditions Of Use and Privacy Notice.
Sold and delivered by Audible, an Amazon company
Share

4.4 out of 5 stars
4.4 out of 5
63 global ratings
How are ratings calculated?
To calculate the overall star rating and percentage breakdown by star, we don’t use a simple average. Instead, our system considers things like how recent a review is and if the reviewer bought the item on Amazon. It also analyses reviews to verify trustworthiness.

Vicki Williams
TOP 500 REVIEWER
5.0 out of 5 stars 4.5 stars. Great start to new spin off series.
Reviewed in Australia on 18 May 2021
We are once again treated by this author to an engaging plot with complex main characters and a mystery to solve.
This is told from Evan’s POV. He’s a vampire private detective and circumstances lead him to Colin, a human who has just been made aware that Paranormals and magic exist.
Even though these two likeable characters become soul bonded they are yet to build a real connection between themselves so there is only very low heated scenes. We are left with Evan and Colin and a potential for a really special relationship between them in the HFN ending. They both have “bruises on our hearts” which need to be taken into account.
I find this to be a very enjoyable read and look forward to more in this spin off series. It can be read as a standalone but I do believe it would enrich your reading experience if you at least read the the final book in the Not Dead Yet series. This would provide more insight into Evan and the other wonderful side characters.
Read more
Helpful
Report abuse

Lee Todd
4.0 out of 5 stars good start
Reviewed in Australia on 19 May 2021
This was a good start to a new but spin-off series. It didn't quite flow as well as the Not Dead Yet series but it definitely has potential and I can't wait to read more about Evan and Colin.
Read more
Helpful
Report abuse
See all reviews

Daniel Bowen
4.0 out of 5 stars All Fired Up -- Vampire Wes's Story
Reviewed in the United States on 25 May 2021
Verified Purchase
Evan is twenty-six and still a new vampire. His sire Hudson and partner Wes leave for England, knowing Evan is at charge at home and at work. All those little details to cover and then a case comes in that Evan can't ignore. Paranormals are dying due to their magic being stolen. Lost. Evan and his friends slowly wind through the clues and then he decides to goes undercover. What could go wrong?

Wes has his own insecurities and depression follows his steps. He's not the character you expect to lead the fight. What he is is fearless, follows through on his promises, and safe in the knowledge his friends are there for him.

Who knows how long human Lance will be at his brother Hudson's home. It's a recipe for disaster -- All those secrets. No, he doesn't know about paranormals or that his brother's a vampire. That's a fact from the other series, so no, no spoiler there. And this one ends with Lance still in the dark which was disappointing.

I didn't mention Red or the case and how it grows and expands. This continues / is a side story to the 'Not Dead Yet' series and I'm curious to hear more. - Dan's Wife
Read more
One person found this helpful
Report abuse

Courtney Bassett
5.0 out of 5 stars Looking forward to more
Reviewed in the United States on 19 May 2021
Verified Purchase
Ever since the, um, events of the Not Dead Yet trilogy, I’ve been hoping Evan would somehow find a happy ending. This book takes place about five years or so after the last one in the trilogy, and while there are obviously more books coming and not everything is resolved, it’s definitely got him in a better place. It grabbed my attention and I read it in a day.

Spin-offs can be tricky if you haven’t read the original series they’re based off of. In this case, while I think you COULD read it without having read Not Dead Yet, I feel you’d understand the characters and world in general better if you did. Besides, they’re freaking awesome (especially in audio), so it’s not like it’s a hardship. 😋
Read more
One person found this helpful
Report abuse

avid reader 1
5.0 out of 5 stars Spicy and suspenseful
Reviewed in the United States on 2 June 2021
Verified Purchase
All Fired Up is a wonderful spinoff from the Not Dead Yet series. I enjoyed seeing characters from that series once more.
The storyline is well thought out and implemented. It is unique, full of action and suspense, and laced with interesting secondary characters who pull their weight and support the piece.
I had wondered how Evan's story would go after what happened in the Not Dead Yet series. I worried for him. His story is everything I could want (even though I didn't know that was what I wanted). I was already half in love with him, and it didn't take long at all to fall the rest of the way.
Colin is a lovable and appealing character, and I came to care about him also.
These characters are well developed, and their backstories are sufficient to give me a better idea of who they are and why.
Seeing Evan and Colin come together and get their HEA is satisfying and believable and the spicy times are well done.
I look forward to more from this author.
Read more
Report abuse

Baby4012
5.0 out of 5 stars Burke does it again
Reviewed in the United States on 19 May 2021
Verified Purchase
Another wonderfully written novel that leaves you wanting the story to never end.

This time we get to follow our... well MY favorite vampire junior Evan(Not Dead yet series).

You knew right from the start that things were gonna go sideways, as it always seems to happen when the "bosses" leave a person in charge for the first time.
Cue me reading for hours on end, throwing sleep out the window, just so I can get one more paragraph then page then chapter done.

Now I'm sitting here wanting so much more. I need to know what happens next.

I love how Burke brought Evan to life. I found his depression and character development written in such a way that it felt like he was a real person. He is not magically over his depression. It is still there, and he still struggles with it. But he has tools and got help so he can go on living his second chance.
Evan seems to have a little bit of the "Wes" factor going for him( think easy things suddenly going wonky) and it makes me very excited to see what sort of things happen next.
Read more
Report abuse

Auburngeo
5.0 out of 5 stars Fired Up
Reviewed in the United States on 30 November 2021
Verified Purchase
This book is more about Evan and how he grows as a person and a partner in the firm. Wes and Hud are called to London to see about Hud’s brother. Evan is left in charge but cannot take any paranormal cases. Of course that goes out of the window. Paranormals that have attended a retreat have been dying because someone has stolen their magic. So Evan goes to the retreat to investigate the case. He meets Collin who is mixed up in everything. It turns out Collin died 40 years ago and has no memory from the day he died. There is a sinister being in Toronto attempting to kill paranormals and Evan has to stop the person before he himself is killed. This book is good!
Read more
Report abuse
See all reviews
Back to top
Get to Know Us
Make Money with Us
Let Us Help You
And don't forget:
© 1996-2022, Amazon.com, Inc. or its affiliates