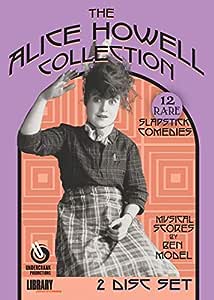 Alice Howell was one of the great female clowns of the silent screen, and starred in her own very popular series of comedy shorts for different studios from 1915-1925. Her hilarious onscreen persona of a slightly addled working-class girl combined feminine delicacy with out-and-out slapstick rough-house. Alice Howell is relatively unknown today, as a majority of her films are lost. This 2-disc DVD set presents, for the first time, a comprehensive selection of Howell's surviving comedies for fans of classic and silent film comedy to discover and enjoy. The 12 films on this set have been digitally restored from rare archival prints and feature new musical scores by Ben Model. DVD produced and released by Undercrank Productions, in association with the Library of Congress. Region-free. // DISC ONE - Shot In The Excitement (1914), Father Was a Loafer (1915), Under New Management (1915), How Stars Are Made (1916), Neptune's Naughty Daughter (1917), In Dutch (1918); DISC TWO - Distilled Love (1920), His Wooden Legacy (1920), Her Lucky Day (1920), Cinderella Cinders (1920), A Convict's Happy Bride (1920), Under A Spell (1925). [Note: This product is an authorized, licensed DVD and is manufactured on demand]

jachorn
5.0 out of 5 stars "Every Film A Howell"
16 March 2019 - Published on Amazon.com
Verified Purchase
I echo what the other have stated regarding this little treasure. Not only do we get a sort of retrospective of her works on film from 1914-1927-ish, we get excellent restorations, generally crisp images and a chance to see why Stan Laurel loved her so much. Mabel Normand could use such an update perhaps as well as Luise Fazenda and Gale Henry, among others. I for one am thoroughly delighted that Ben Model and others recognized this long-overlooked comedienne.
Read more
13 people found this helpful

B-Man 123
2.0 out of 5 stars Not a quality or desireable silent film collection
27 April 2019 - Published on Amazon.com
Verified Purchase
It appears to me that some silent film fans are desperate to hype up recent silent film products only to try to get more people to support these great endeavors. However, if we put such an effort on film releases of poor quality, such as this one, then some people may be mislead into thinking that collections like this one are what all the efforts for restoring silent films is about, and thus lose any interest in silent films. They could miss out on experiencing the cream of the crop because of taking their first taste from the bottom of the barrel, and yes, this collection is bottom of the barrel. Why undercrank chose to put their time into to restoring these bottom of the barrel films, I don't know. Many of the films have missing footage and a good portion of them have moderate to high film damage which could not be corrected by the restoration. Some of the shorts switch back and forth from 35mm footage to lower quality 16mm reduction so often that it is a distraction. The first disc has one short that is only sort of entertaining, but overall the first disc as a whole has little to no slapstick. The second disc starts to include more slapstick, however I feel it is mainly kept alive by it's highlights, which are a short which stars Oliver Hardy (only available on this collection) and the short "Cinderella Cinders". In conclusion, I feel this collection is meant only for a selective group of individuals. Who do I believe it is intended for? I believe it is for die hard film historians who desire an exhaustive collection of all silent films made available, and it also may be for the Oliver Hardy fanatics due to the single short that he stars in. If you are a huge fan of silent films and also enjoy slapstick comedy, I would not suggest this collection to you. Though, since you are reading this, it means you have some sort of interest in Alice Howell and silent films, so my suggestion to you is to purchase the movie "Ella Cinders" from Grapevine Video starring Colleen Moore (one of the greatest stars of the silent era). That dvd includes the short "Cinderella Cinders" which is the highlight film of the Alice Howell collection and in comparison to the other shorts on the collection is all you really need to see of Alice Howell. Finally, I applaud Ben Model and Undercrank for making the effort to salvage the remains of this lost silent comedian and exposing her films to the public. It's only too bad that what little they were able to find was not of very good quality. In my opinion, they put all of their hard work into a dud. I only hope that all of the excellent individuals out there who are resurrecting these silent films will continue to find the cream of the silent era, do excellent restorations, and release them on very high quality dvd's and Blu Rays. Thanks
Read more
3 people found this helpful

A. Burchfield
3.0 out of 5 stars I was disappointed in this one
4 August 2019 - Published on Amazon.com
Verified Purchase
I'd never heard of Alice Howell until her name came up while I was looking for something else, I decided to try it out.
A total of 12 stories on 2 DVDs, some of them are fragmentary (either some parts missing or put together from 2 different sources…some of that was 16 mm instead of 35, not everything got replaced at that. Little notes at the start of each title tell you what sources were used (parts of some stories came from 2 different countries). For "restored films these are still very rough…scratchy, over exposed or too dark, sometimes something is obviously missing or the actors makeup was really caked on. Most of the time the damage isn't too distracting.
An actor named .… St. John worked on a couple of early titles in this collection, he also worked with Buster Keaton. Oliver Hardy (pre Fame (?) has a big role in"Distilled Love", 1920. Both men, especially Hardy, are hard to recognize.
I wasn't all that impressed with Alice, she did all right but I think I like Buster better. I wouldn't rule out buying more Alice Howell movies but I think I'd buy a title because she's a woman in a world where most of the better known "stars" were men.

William G. Piper
5.0 out of 5 stars Great collection
5 April 2019 - Published on Amazon.com
Verified Purchase
I was unaware of Alice Howell until this collection. While I am not typically fond of comedies (regardless of cinema era), I did enjoy these a great deal. Alice Howell really shines as the star of these shorts. She is such an unique personality. I am glad this collection was released. Hopefully more of her films are discovered/released.
Read more
3 people found this helpful

mr blue
5.0 out of 5 stars Interesting view on slent slapstick
16 June 2019 - Published on Amazon.com
Verified Purchase
The videos gave me a good laugh and an interesting perspectivve on silent slapstick comedy. I also was enthralled by seeing a woman comedienne instead of a male comedian. This is now part of my comedy collection.
Read more
One person found this helpful
Go to Amazon.com to see all 15 reviews 4.3 out of 5 stars