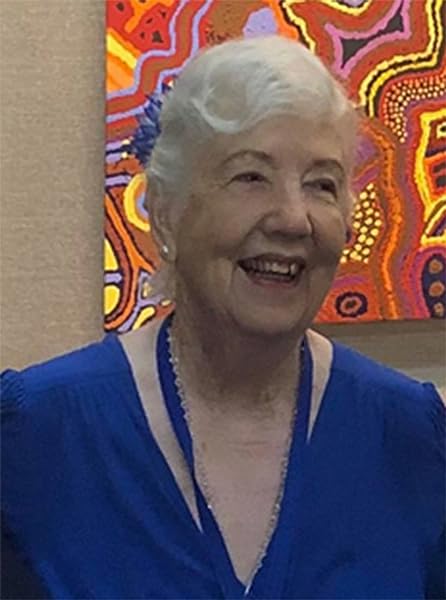 Alcheringa - When the First Ancestors were Created: Ancient Aliens in Australia Paperback – 14 May 2020

by Valerie J Barrow (Author)
4.6 out of 5 stars 40 ratings
See all formats and editions
Sorry, there was a problem loading this page. Try again.

Page 1 of 1 Start overPage 1 of 1
Previous page
Next page
Start reading Alcheringa - When the First Ancestors Were Created on your Kindle in under a minute.

4.6 out of 5 stars
4.6 out of 5
40 global ratings
How are ratings calculated?
To calculate the overall star rating and percentage breakdown by star, we don’t use a simple average. Instead, our system considers things like how recent a review is and if the reviewer bought the item on Amazon. It also analyses reviews to verify trustworthiness.

Kindle Customer
5.0 out of 5 stars A book that awakened me even more
Reviewed in Australia on 15 February 2021
Verified Purchase
I have been guided to read this book, just like I am guided to people or information sources by whoever guides me. I read it so quickly and with total focus. It answered questions I had and taught me further. It also healed my own self in some ways, I am sure. I'm so thankful for this book and all those who helped make it. It is another great gift from our star family.
Read more
Helpful
Report abuse

Shahereen Shums Bhargava
5.0 out of 5 stars Affirmation
Reviewed in Australia on 24 November 2020
Verified Purchase
This book awakened my memory of being transferred into my first human body. I knew I was a Star Soul and this book affirmed why I keep coming back to an Earth Body... now I know. I have a role to fulfil. Thank you so much
Read more
Helpful
Report abuse

Sieghilde Kirchmayer
5.0 out of 5 stars How magical ancient places in Australia are...
Reviewed in Australia on 14 August 2020
Verified Purchase
A compelling story! So much to learn from it!
Read more
Helpful
Report abuse
See all reviews

Bob Lock
5.0 out of 5 stars I have read some strange books in my time, but this is something else.
Reviewed in the United Kingdom on 23 December 2018
Verified Purchase
I have read some strange books in my time, but this book is something else. Why did tears start falling from my eyes, just a few chapters in? Something certainly "struck a chord". Could it actually be true?
There is much that we do not understand, and probably never will. But in the meantime, there is much to learn (and remember).
Perhaps there IS life throughout the universe (but not necessarily life as we know it on Earth), and that we go through countless cycles of reincarnation before we eventually return to the Source of All.
And maybe some of us have been around for thousands if not millions of years, in a variety of body-types, on various planets, and have finally met up again (on Earth) with souls we have worked with over & over again in other lifetimes and different places in the universe. Maybe... It certainly makes you think. What exactly did happen all those years ago?
Thank you Valerie Barrow for writing all this down (and also to Daniella Fenton for drawing our attention to this very important book).
Read more
Report abuse

Mr. J. Borland
5.0 out of 5 stars Amazing narrative - challenges conventional histories
Reviewed in the United Kingdom on 24 January 2019
Verified Purchase
This was an excellent read, so much so that I sent to her personally to get a copy of another of her books 'The Book of Love', which I could not source anywhere but from the author in Australia.
We know that Moldavite is a tektite crystal not of this world, but the Author explains how it came about and it will shock you to realise that with this unique crystal you are holding a piece of a crystal mothership that was blown out the sky. Explains our ancestry as part of the narrative so is very interesting from a different perspective as we are not permitted to know and understand our origins, so it is left to what we could call non-conventional 'outliers' to recite their research and up to you to assimilate and process it along with others that the mainstream decievers promulgate. (note - the Bible as edited nor the evolutionary myth don't cut it!) It was Frank Zappa that said that the mind was like a parachute as it only works well when it is open, and this wonderful little volume will appeal mostly to those who approach it understanding that we have been misinformed, propagandised and disenfranchised in the programming that passes for education nowadays, will revel in this information. If in doubt read it anyway as it contains more surprises and credibility that much that I've previously read.
Read more
Report abuse

AlexC
5.0 out of 5 stars Very important knowledge
Reviewed in Germany on 29 July 2020
Verified Purchase
If you want to know what is going on today and why. If you want to know what the future holds. If you want to release fear and live with love you must read this book! The heart warming story about our ancient past told by Valerie and her star friends is incredibly enlightened it will change your thinking about humanity and the universe forever.
Read more
Report abuse

Robin Landry
5.0 out of 5 stars Filled in the blanks for me
Reviewed in the United States on 1 July 2018
Verified Purchase
It's not often I come across a book that gives so much information on our ancient beginnings that is so clearly written, and makes so much sense. I feel like I've heard it all and read it all at this points, and now I'm just filling in the last pieces of the puzzle. This book was instrumental in understanding the how, and why of our ancient history.
Written by way of channeling the Pleiadian captain of the downed mothership that came to Earth to uplift her from the dark, reptilian/Draco beings that had lived on her for millennium. Creator gods themselves, the Draco were the 'fallen angels', the creator spirits who turned their back on the Creator, to explore the darkness, would be my guess. Regardless, this story only mentions who the Draco are, and how they created the Reptilians to serve them, and then built some beings out of the hominids that were running around the earth a million years ago.
Enter, the Pleiadians, a group of beings who hadn't turned away from the light of the Creator, and in fact embraced it. They were answering a call for explores to go out to a new planet to bring more light to the dark world. A huge mothership was built, one that was imbued with a consciousness of sorts, and off the 50,000 mixed group of Pleiadians and others went to colonize Earth.
Unfortunately, as political usually go, one side was not being upfront about vacating the premises(the Draco), and for the life of me, I can't figure out why they would? They were there first, so why give it up to their enemies?
So the big mothership goes through the wormhole, or whatever it is they use to go through dimensions, and boom, the reptilians fire on the ship destroying her as her occupants scatter in small ships, bound for the surface of Earth. Of the 90 who survived, they set up camp in a world where they could barely breathe the air(they preferred nitrogen, and so I do when I'm at the dentist), and of course all of the bugs and pathogens around the Earth were new to their pristine immune system, so it was a desperate situation.
Our sun was a hot yellow sun, as opposed to their cool blue on(I'm guessing), so they could only come out at night. Think of how some people, even today, are allergic to the sun and you get the idea.
I won't tell the whole story, other than to say that white people are not native to the Earth, which seems kind of obvious when you think about it. But, we did come 900,000 years ago to make the Earth a better place, with the idea that as these people died, the lower vibrating reptilians could incarnate into their now, hybrid bodies and be pulled upward towards the light. There was a great sacrifice of a group who came in love and who were betrayed--but in the end, their sacrifice was rewarded by creating humans who are more than just a smart ape running around, being enslaved by some beings out of our worst nightmare. I say this because it seems as the white race is being blamed for everything now days, and sure there are some dispicable people out there, but color does not make them so.
The most interesting idea this book gave me, was how it's the overcoming of obsticals that raises the vibration of both the person making the effort, and the planet herself. It makes me imagine that the more obsticals a person has in their life--the more their soul chooses to grow. Kind of cuts out all of the complaining in a hurry.
Read more
6 people found this helpful
Report abuse

D. Stephens
5.0 out of 5 stars Fascinating story, Good Read
Reviewed in the United States on 14 June 2018
Verified Purchase
Worth reading. Is it true? There seems to be evidence it is, but maybe with a different timeline. She says moldavite is the remains of the ship that was blown up, but then says this happened a million years ago. Geologists say moldavite is much older than that, but who really knows for sure? The very deep cut glyphs in the rock where the ship is shown and the story of survivors in that place, do show us that something happened there that was not good. Very enjoyable read, highly recommended
Read more
8 people found this helpful
Report abuse
See all reviews
Back to top
Get to Know Us
Make Money with Us
Let Us Help You
And don't forget:
© 1996-2021, Amazon.com, Inc. or its affiliates