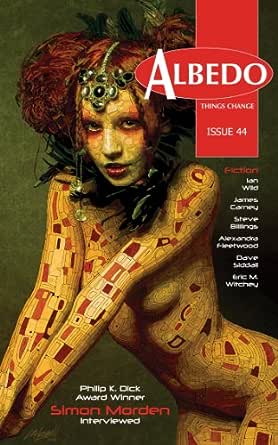 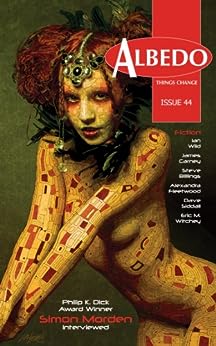 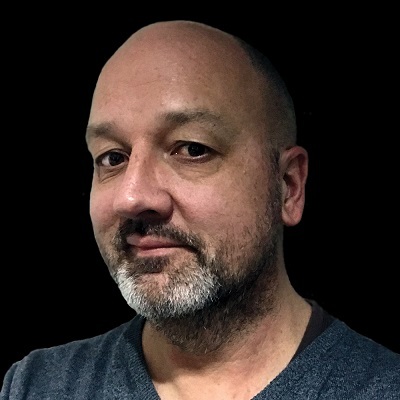 The latest edition of the Dublin-based magazine is now available and in it there are seven short stories, a couple of interviews and lots of reviews. Very good quality fiction drips from the pages which is what you’d expect from a magazine of this standing. They are stories which are challenging, thoughtful and intriguing and you can’t say much more than that.

The Woman Who Could Choose the Stars by TD Edge was a rather strange and quaint story about a woman with a broken relationship who meets up with an alien. Not a creature with tentacles and seven eyes, it’s someone like anybody else on earth but he makes her a proposition which may be difficult to refuse. What would she do?

Stephen Gaskell's Landscapes of a Martian Heart is set on the fourth planet from the sun in the not too distant future. Terraforming is taking place and the world is slowly changing to become more earthlike. One thing we can’t change, however, is gravity which is one third of Earth’s and once resident on the planet human bodies weaken over time. A dilemma is created when a young woman visits the planet only to find that she was pregnant from the start of the journey. This is the first pregnancy in space and the consequences on the child could be enormous, not helped by the environment on Mars.

King Rook by Martin McGrath is set in the early days of the troubles in Northern Ireland. In a bleak and rough environment, a boy grows up being protected by rooks that live in the woods beside his house. The King Rook gives him occasional presents which he collects and retains in a box. Unfortunately one of the chief IRA men decides that he should also carry another box to the mainland and it’s something he doesn’t want to do.

Kelly Rede's story entitled Pageant takes us to the world of little children who dress up as adults and a Svengali -like character who manages them throughout their lives. We also have Root and Branch by Jacey Bedford which gives a new meaning to the concept of a family tree.

The Shaping Man by David Conyers is a post apocalyptic tale but one with a startling difference. It’s not nuclear war or severe climatic change but a weird type of genetic warfare which has left the surviving population extremely dysfunctional and barely able to function. It’s told from the point of view of a man who, along with his wife and daughter, live in a remote area of Australia near Darwin. The effect of the virus is to make him unable to recognise most people, in particular his family, but also to be unable to carry out tasks such as driving a car. His wife and daughter are unintelligible and completely unrecognisable but he knows they are with him and it’s his duty to provide.

Anyone in such a situation would be paranoid. They don’t know what happened or how it happened, they just know that everything is changed beyond recognition and few people can function even on a basic level. Then, a man arrives in a vehicle. He seems to be unaffected until it’s discovered that he can’t recognise the landscape more than a few paces from himself in any direction. He can, however, recognise people and is in the position to provide a link between the members of the family.

This is an unforgiving and bleak tale, full of atmosphere and tension. People are no longer ordinary people, they are changed beyond recognition to become twisted caricatures of their real selves. It’s a world in chaos when everything is turned upside down. The writing is very good but you say to yourself, this is all a bit improbable! How could a situation like that possibly exist? Then a thought came to mind and that was the book written some years ago entitled, The Man Who Mistook His Wife For a Hat by Oliver Sacks. It lists several neurological conditions, including the man who couldn’t recognise the face of his wife. Then you think, what if viruses were created to attack certain areas of the brain? Maybe the offending country could produce a vaccine but this wouldn’t do any good against an opposing virus with a different area of attack. The end result would be that people would be left in the dark to scramble about for survival and only a small number would persevere. The results would be just as described in this story by David Conyers. It leaves you with a cold shiver running down your spine! This could happen!

Luigi Musolino's story, The Stag, is translated from the original Italian. Somewhat surreal and esoteric, a man becomes stranded when his vehicle breaks down. He encounters a strange being, one he had met many years before, and the prospect of it terrifies him greatly. It would be a matter of life and death but defeating this creature seems to be an impossible task.

Juliet McKenna conducted the fantasy reviews which were based on famous monsters while the Science Fiction reviews, focusing on alternate worlds, was written by George Anderson.

All in all this is a very balanced and well thought out magazine. Available in various formats, it can be purchased from lots of different sources including Amazon and at approximately £2 in the UK for the Kindle edition, it seems to be a very good buy and one to recommend.
Read more
Report abuse

Kindle Customer
5.0 out of 5 stars Quality magazine
Reviewed in the United Kingdom on 12 May 2017
Verified Purchase
Always worth a look, recommended.
Read more
Report abuse

sortilegus
5.0 out of 5 stars Finally!
Reviewed in the United States on 4 May 2016
Verified Purchase
I have spent several months searching for a quality literary magazine filled with both science fiction and horror, and I am so glad I stumbled upon this magazine. There are some truly memorable pieces in this issue, not to mention a great interview with none other than Peter Watts, author of Blindsight. There are a few minor editing issues--typos mostly--but you'll find that in any publication these days. The most important thing is that the stories in this collection are unique, exciting, and full of heart. There's a nice variety of sci-fi and dark fiction as well, so it never feels monotonous or repetitive.

The only downside for me is that the magazine is based in Ireland, which means readers like me in the US will have to shell out over $50 for a subscription (4 print issues). That's a lot for any magazine, though I'd say this one is worth it. Long story short, I wish they'd put more issues on Kindle.
Read more
Report abuse
See all reviews
Get FREE delivery with Amazon Prime
Prime members enjoy FREE Delivery and exclusive access to movies, TV shows, music, Kindle e-books, Twitch Prime, and more.
> Get Started
Back to top
Get to Know Us
Make Money with Us
Let Us Help You
And don't forget:
© 1996-2020, Amazon.com, Inc. or its affiliates