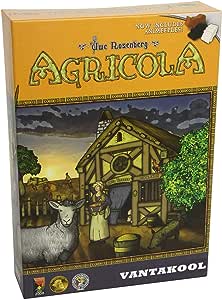 ZMG7026 High quality hobby games and accessories. Fun and strategy all in one box. Perfect for families and strategy gamers alike.

4.6 out of 5 stars
4.6 out of 5
507 global ratings
How are ratings calculated?
To calculate the overall star rating and percentage breakdown by star, we don’t use a simple average. Instead, our system considers things like how recent a review is and if the reviewer bought the item on Amazon. It also analyses reviews to verify trustworthiness.

2bit
5.0 out of 5 stars Value for money?
Reviewed in the United Kingdom on 25 September 2012
Verified Purchase
I won't describe the gameplay as that's been covered really well by other reviewers, I just thought I'd make a mention of value for money.

After all, 50 quid is a lot to pay for any box game, let alone one about 17th century subsistence farming. So I was rather nervous when I bought a copy - I thought I might struggle to get any fun out of such a dry subject, and I'd then hardly convince the family to give it a try. Would I regret buying it?

No. Everyone loves it, and in seven days we must already have played it more than 7 times: that's my wife and I, 23 year old son and 17 year old daughter. Sometimes we're joined by a fifth player. It's all good, from 2 player to 5 player.

It's so popular that as soon as one 2-3 hour game is finished there's a demand to immediately start another.

I have to say it is. It's packed with substantial and well made components, and has an air of quality and durability. You're getting a lot of material: hundreds of wooden counters and high quality cardboard tiles, hundreds of playing cards (worth getting card protectors for the principal cards to keep them pristine), lots of colourful game boards, a good colourful manual, excellent artwork everywhere, and all wrapped up in a solid box. It all weighs a ton. When you add in the number of hours of enjoyment we've already had with the game, I think it's £50 well spent.

Final thought: you've probably experienced opening a £30 box game and thinking "This is all I get? £30? Seriously?". With Agricola you won't feel you've been mugged.

Hodgeheg
5.0 out of 5 stars Brilliantly designed game, fairly complex and involved, and the equivalent of 2 expansions in the basic box!
Reviewed in the United Kingdom on 11 November 2013
Verified Purchase
We play quite a lot of board games, and this has been a much enjoyed addition to the collection! This has been played 3 times now with varying numbers of players, so this is just an initial impressions review as there are so many aspects of the game we have yet to add in.

-Number of players
One of the aspects that stood out about this game is that it can be played by between 1 and 6 players, and doesn't require the addition of a ghost player for fewer players. As the basic game is most about developing your own farm and there is minimal interaction between players during the course of the game, it works equally well with fewer players.

-Game dynamics
Every player starts off with 2 family members living in a two room farmhouse, and the aim of the game is to have a farm which scores highly at the end. You can extend or improve your home, add family members, grow crops and keep animals, but while extending your farm you must also make sure that you are able to keep your family fed during the harvest rounds which occur every few rounds.

-Prioritising
It quickly became obvious that the key to this game is focusing and prioritising on what is going to give a player points at the end. As there are 14 rounds, there is really limited time in which to get everything you want done before scoring at the end of the game. The first time we played, we were slightly overwhelmed by all the ways to score negative points, but the more it is replayed the more you understand how the game works and are able to play more astutely.

-Timing
Limiting the game to 14 rounds turns out to be excellent designing. At 30-60 minutes per player, it feels tense and too short, but this keeps the game exciting as there is always a rush to get things done. It is still a fairly long game!

-Minor improvements and occupations
Each player has a hand of action cards which they can player during the course of the game. These are all unique, and a major strength of the game is the massive excess of cards provided, meaning every game is different and there is no way to predict which cards other players may have.

-Interactive and Complex Decks
We haven't even touched these yet, but the basic game includes 2 whole additional decks of minor improvement and occupation cards. Considering what other games (Alhambra, Catan, Carcassonne, etc.) consider to be worthy of a £20 expansion, this seems a very generous addition. This is not a cheap game, but it feels refreshingly honest to provide everything needed in one basic box.

-Overall impressions
This is a very attractive game with clear attention to detail in its design. It works very well, it's complex enough that every time you play is different, and it's fun! Highly recommended with no reservations other that it's fairly complicated and requires a significant time and concentration investment to get into it.
Read more
One person found this helpful
Report abuse

Nadia
5.0 out of 5 stars A Vastly More Complicated Version of Settlers of Catan
Reviewed in the United Kingdom on 25 March 2013
Verified Purchase
If you like games with simple game play and not much to remember or think about, stick to snakes and ladders. This is NOT a simple game. There are a lot of pieces and a lot of victory conditions. You need to keep a lot of things in mind all the way through. It's a great game though. Competitive, challenging and compelling.

The instructions aren't aren't all that great. You may find you need to get online and check out what other people have said to make sense of one or two sections - we did, and we're biiiig game players. Don't expect to remember everything the first time you play. It takes at least two games to get a grip on all the rules and goals. It's really worth the effort though, hours and hours of fun.
Read more
2 people found this helpful
Report abuse

Tomato Ketchup
5.0 out of 5 stars Great game for 2 players or more!
Reviewed in the United Kingdom on 20 July 2017
Verified Purchase
This is a fantastic game I would highly recommend. My husband and I are always on the look out for games that we can play 2 player and this one ranks highly in our favourites with the bonus we can play with more friends too. The tutorials are clear and good fun and get you in the swing for the full game. The theme of this game is non-threatening for gaming novices and I think you could welcome anyone in to your gaming party with this game.
Read more
Report abuse