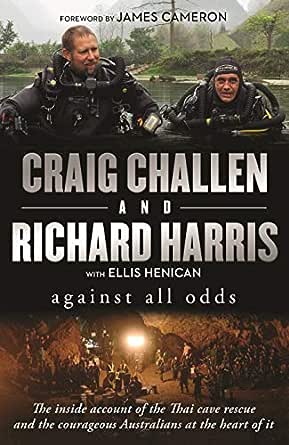 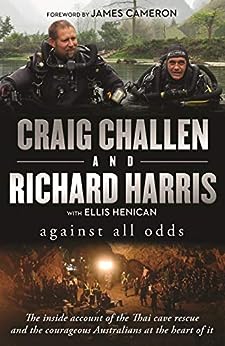 Against All Odds: The inside account of the Thai cave rescue and the courageous Australians at the heart of it Kindle Edition

The inside account of the breathtaking rescue that captured the world.

In June 2018, for seventeen days, the world watched and held its breath as the Wild Boars soccer team were trapped deep in a cave in Thailand. Marooned beyond flooded cave passages after unexpected rains, they were finally rescued, one-by-one, against almost impossible odds, by an international cave-diving team which included Australians Dr Richard Harris and Dr Craig Challen.

These two men were chosen for their medical expertise and cave diving knowledge, but this dangerous rescue asked so much more of them. They had to remain calm under extreme pressure and intense scrutiny, adapt to constantly changing circumstances and importantly, build trust among the rescue team and with the young boys and their coach, whose lives were in their hands.
Here is the story of these two Australian men who became international heroes – it is a story of determination, cunning and triumph that will long be remembered.

Aussie.Abroad
TOP 1000 REVIEWER
5.0 out of 5 stars Courageous and Inspiring
12 January 2020
Format: Kindle EditionVerified Purchase
Like everyone, the Wild Boar rescue captivated me and I was on he edge of my seat waiting for any news. This would not have come about without the dedication of all. Trust was paramount from the Wild Boars, they had faith in everyone to get them out. Having read this account I am in awe of both of the authors, it has inspired me more to get out and experience life and not be a passenger.
Read more
Helpful
Comment Report abuse

Ern S. Hulbert
5.0 out of 5 stars Behind The Rescue
20 December 2019
Format: PaperbackVerified Purchase
A wonderful telling of a truly unique and exceptional situation which had all the elements of a human disaster of epic proportion but transformed into a brilliantly executed rescue beyond all expectation
and against insuperable odds to rescuing the 12 boys and their coach alive from their seemingly hopeless predicament. The dangerous obstacles and risks inherent in the Cave were sadly reflected in the death of the
very experienced Thai Navy Seal Diver Saman Gunan.

From a suggestion conceived by the British Diver Rick Stanton, one of the two British Divers who found the boys, asking Dr Richard Harris whether he could sedate someone and dive them out of a situation grew the
unprecented idea to completely anaesthetise the boys and coach and to then dive them out of the cave. Confronted by ethical and societal dilemmas and foreboding of monsoonal downpours which posed risks of
flooding the cave and drowing everyone, Richard Harris narrates the tortuous efforts to have his rescue idea approved by the Thai authorities and the realities of implementing the daring plan.

The enormity of the daring and physically demanding events which had to be rerpeated 13 times is extraordinary and a testament to the bravery and endurance of every member involved in ther rescue and against insuperable odds.

A great read and wonderful insight into the feelings and thoughts of both Richard Harris and Craig Challen as they went about the rescue but also the other wonderful participants and the boys and their coach.
Read more
Helpful
Comment Report abuse

Nana Mez
TOP 500 REVIEWER
5.0 out of 5 stars Great Christmas Present
9 December 2019
Format: Kindle EditionVerified Purchase
This book was a great read. Even though we all knew the outcome it was no less a real insight into the planning and preparation, doubts in their minds, the couple of worrying hiccups and the joy at the end made for a fantastic read. Could not put the book down.
Read more
Helpful
Comment Report abuse

Elza
5.0 out of 5 stars COMPELLING
1 December 2019
Format: Kindle EditionVerified Purchase
Knowing the ending doesn't make this any less riveting. Told with humility and wry humour, this book reveals the enormous team effort that was needed to achieve success, along with the numerous incidents that could have spelled disaster. These Aussie heroes (a word they both eschew) explore the vagaries of bureaucracy, the potential clash of egos and the battles against self-doubt in an honest warts-and-all approach. A wonderful tribute to an amazing feat.
Read more
Helpful
Comment Report abuse

hazel hughes
5.0 out of 5 stars An amazing book
18 December 2019
Format: Kindle EditionVerified Purchase
I enjoyed reading about Harry and Craig's lives before they started caving. At the actual rescue it was mind blowing to understand what they actually had to do and also all the back up divers. I was so pleased with this book that I have bought 2 of these books for Christmas presents.
Read more
Helpful
Comment Report abuse

Margaret White
5.0 out of 5 stars Incredible account of a life and death situation
17 January 2020
Format: Kindle EditionVerified Purchase
Reading the full story by those involved with an incredible team of professionals, quietly and calmly going about their business......couldn't put it down. Real men, real doubts, real emotions and amazing outcome from such an unbelievably difficult situation
Read more
Helpful
Comment Report abuse

Amazon Customer
5.0 out of 5 stars Fantastic! I couldn’t put it down!
29 December 2019
Format: PaperbackVerified Purchase
This is such a well written book; a must read! As the rescue played out in Thailand we all watched from around the globe. The details are riveting. I couldn’t wait to have copies delivered to Canada for Christmas after its release. Amazing work Harry & Craig!
Read more
Helpful
Comment Report abuse
There are 25 customer reviews and 44 customer ratings.
See all 25 customer reviews
Write a customer review

Go to Amazon.com to see all 8 reviews 4.8 out of 5 stars
Get FREE delivery with Amazon Prime
Prime members enjoy FREE Delivery and exclusive access to movies, TV shows, music, Kindle e-books, Twitch Prime, and more.
> Get Started
Back to top
Get to Know Us
Make Money with Us
Let Us Help You
And don't forget:
© 1996-2020, Amazon.com, Inc. or its affiliates