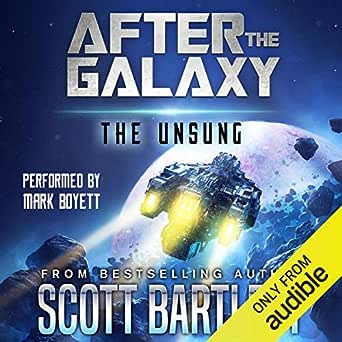 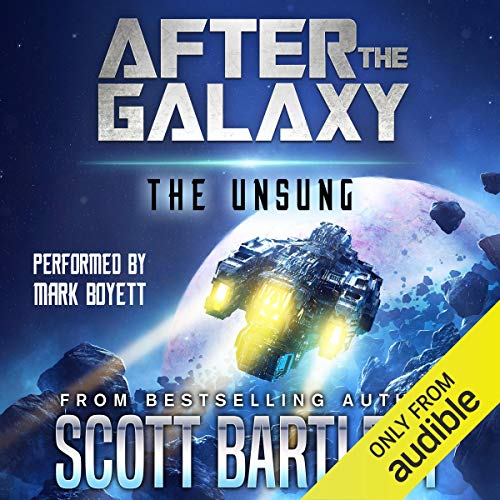 After the Galaxy: The Unsung

Kindle Customer
4.0 out of 5 stars Slow start but worrh the wait.
Reviewed in Australia on 14 July 2019
Verified Purchase
The universe is carefully crafted and believable. It raises all sorts of questions about 'life the universe and all that' and to its credit makes an effort to deal with them.
Characters start as stereotypes but develop. The action, when it eventaully comes, is heroic and impossible but that's the genre.
First in a series but concludes the story arc, with an ethical hook to the next books.
All in all a good read.
Read more
Helpful
Report abuse

Peter Eerden
TOP 500 REVIEWER
3.0 out of 5 stars Enjoyable if not enforcing.
Reviewed in Australia on 30 December 2018
Verified Purchase
There is so much going on here that I lost my way a few times and had to retrace my steps. I did like the irreverent way the characters were rendered, though a tad more editing would have come in handy. All in all a reasonable read though I will wait to catch up on future novels in this series.
Read more
Helpful
Report abuse

DonY
4.0 out of 5 stars Big meal !!
Reviewed in Australia on 26 July 2019
Verified Purchase
As usual Scott has packed more into a single book that most pack into a trilogy. What a great read - and fascinating universe he has created - could not put it down at times. One or two spots a bit rough but still really enjoyable. Off to buy the next in the series.
Read more
Helpful
Report abuse

Kindle Customer
5.0 out of 5 stars Loved it
Reviewed in Australia on 21 July 2020
Verified Purchase
Loved the whole premise, characters and storyline, couldn't wait for the next in the series
Read more
Helpful
Report abuse

3axis
5.0 out of 5 stars Really enjoying this book, new and exciting, recommended
Reviewed in the United Kingdom on 17 January 2019
Verified Purchase
Disclaimer: I have been privileged to be on the advanced readers list for this book and so I am reading it for free but this in no way influences my review. I grew up reading Issacc Asimov etc. and I claim that Scott's work is easily the modern equivalent!

As I find myself in an odd place I wanted to tell you that your new book (after the galaxy: unsung) is amazing, love the mix of real and digital! I hope I get to finish reading it and the rest of the series, I find myself going tomorrow to have a non cancerous brain tumor removed that was discovered after a seizure last week! everything is positive in terms of the best surgeons/hospital in UK, where it is and what it is and they talking about stealth computer guided assistance! how sci-fi is that!

keep belief in your amazing author skillz :-) I hope/intend to read and review every book you write.

enjoy every fragile minute this life gives us and thank you for brightening mine with your books.

Kindle Customer
5.0 out of 5 stars A Subverse space opera.
Reviewed in the United Kingdom on 11 November 2019
Verified Purchase
Joe Pikeman, a live Guardian in a galaxy where most people have surrendered their consciousness to the Subverse, finds himself pitted against not only an army of pirates but a megalomaniac half-man/half-robot intent on recreating a new galaxy order. Having his own fellow Guardians hunting for him, because he had disobeyed orders and attempted to rescue the kidnapped daughter of an important VIP, did not help matters! A wilful and wayward daughter being thrown into the equation only serves to complicate matters.
Having a crew of virtual personnel, one of whom is his estranged wife, merely adds spice to the mixture of this multiverse space opera.
Read more
Report abuse

Gabrielle
5.0 out of 5 stars Nearly stopped reading it, but glad I continued!
Reviewed in the United Kingdom on 20 July 2019
Verified Purchase
A few pages in - and there is a dog introduced, and not just any dog, but my favourite breed! Hmmm, thinks I, if this is going to be dog = red shirt and an unhappy ending, I'm stopping my read now!

BUT, the author did not commit my ultimate "story hate" and it isn't too much of a spoiler to say that the dog has a starring role and a happy ending. As a result, I enjoyed the book very much, even as someone who has never played the sort of video games described. I really, really want to read the next one! I
Read more
Report abuse

MNV
4.0 out of 5 stars Good SF read.
Reviewed in the United Kingdom on 9 July 2019
Verified Purchase
This is the first book I’ve read by this author, but I enjoyed it. I thought it was a bit confusing at first, working out what was going on, but once I got into it it was great. The story is told in the first person and the hero has a responsible profession, that of troubleshooter. However there are problems in paradise.
I won’t giveaway the plot except to say it’s worth reading.
Read more
Report abuse

COBBY
3.0 out of 5 stars Don't believe the 5 star reviews.
Reviewed in the United Kingdom on 19 December 2019
Verified Purchase
The "hero" is a stubborn and stupid annoying idiot. I wonder if the author has based him on somebody he knows? The rest of the characters are people who you don't care whether they live or die. Based this possible future, I would think the author does not think much of the human race. Having said all the negatives the story is quite well written.
Read more
Report abuse
See all reviews
Back to top
Get to Know Us
Make Money with Us
Let Us Help You
And don't forget:
© 1996-2021, Amazon.com, Inc. or its affiliates