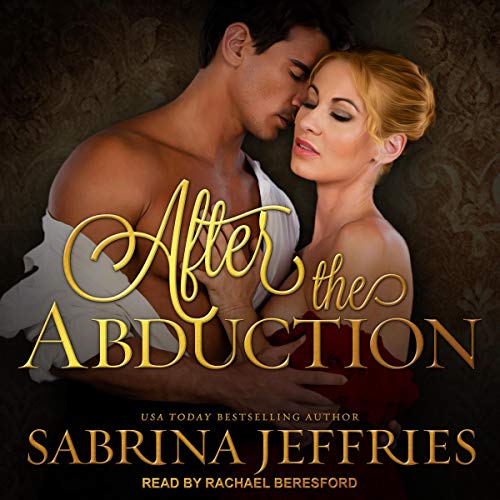 After the Abduction: Swanlea Spinsters, Book 3

4.5 out of 5 stars
4.5 out of 5
113 global ratings
How are ratings calculated?
To calculate the overall star rating and percentage breakdown by star, we don’t use a simple average. Instead, our system considers things like how recent a review is and if the reviewer bought the item on Amazon. It also analyses reviews to verify trustworthiness.

Nic
5.0 out of 5 stars As expected
Reviewed in the United Kingdom on 2 May 2014
Verified Purchase
After reading a few of Sabrina Jeffries books I find that this only is just as good as I had come to expect. I find that I preferred the pirate Lord though.
Read more
Report abuse

Keith Bendell
4.0 out of 5 stars good!
Reviewed in the United Kingdom on 3 April 2018
Verified Purchase
It was as expected from Sabarina. good !
Read more
Report abuse

Roberta Williams
5.0 out of 5 stars Deserves a second read to fully appreciate.....
Reviewed in the United States on 21 February 2016
Verified Purchase
this was one of the best of the series and employs one of my favorite scenarios- the hero and the heroine vs the rest of the world, although it doesn't start out that way. The characters and primary plot line; with its little sub- plots; are so intriguing, consistent and believable I read it twice because after my first read of the story, I had often skipped some of the finer details in my effort to get to the climax of the story. And I waited several months and then re-read it. The second reading held the same anticipation with its new "clues" as the original read. It started with giving the basic facts of the conflict including the controversy surrounding the identity of Juliet's kidnapper, then leaving the bits pieces of the plot be be discovered by the reader. Juliet becomes involved and believes she is eloping, only to discover its a kidnapping. From the beginning she understands that the kidnapper isn't Pryce Morgan but his twin, Lord Templemore who actually did the kidnapping although she agrees to keep that knowledge to herself demanding that Sebastion be the one to enlighten her family. Then the story gets really interesting as the complex characters emerge while the relationships cement with the story line. Added to growing interaction between Juliet and Sebastion is the proverbial tensions that often develop between a married couple-Griff and Rosalind- as they learn to travel a path that often has rocky misunderstandings and pitfalls.
Read more
One person found this helpful
Report abuse

Judge Tabor
5.0 out of 5 stars Juliet Gets Her Sweet Revenge
Reviewed in the United States on 22 January 2015
Verified Purchase
If you're reading this series of books in order, you will already be aware that Book #2 - A Notorious Love (Daniel's and Helena's story) was based on Juliet's kidnapping by Morgan Pryce. Juliet thought she was running away to get married, but unfortunately, that was not Morgan's goal. I won't give away any other details of that book in case anyone reading this review should decide to read that book.

Two years have passed since Daniel and Helena went on their chase to retrieve Juliet. She's had two dull seasons, albeit with several marriage offers. But... Juliet cannot get Morgan and the mysteries surrounding why he abducted her off her mind. Worse yet, he seems to have disappeared without a trace so she can't even confront him. Now, rumors about Juliet are beginning to surface in London based on that episode in her life. She's determined to have answers so Griff and Rosalind escort Juliet to the the reclusive baron - Sebastian, Lord Templemore's home - who is somehow associated with Morgan. When Juliet arrives at Sebastian's home, she immediately knows he is the man who kidnapped her two years ago. He denies it.

What is Sebastian's game? His answers about having a missing twin brother seem suspect. Juliet will have her answers and she will take them out of Sebastian's skin if necessary. No longer the sweet, biddable girl Sebastian knew two years ago, she's a woman who's had two years to agonize over her mistakes and to consider how she was left feeling like a fool. Plus, it smarts that her family may think she lacks good judgment. Someone will pay! But, first she must figure out a way to trap Sebastian into revealing he's the one who kidnapped her.

As usual, Griff can be counted on to allow his volatile character to shine forth at every opportunity and both Sebastian and Rosalind provide him with fodder for his passions. He's almost a cartoon character, he shows such a lack of restraint. There's a sweet secondary story about Rosalind's attempts to get pregnant, Griff misunderstanding some happenings between Rosalind and Sebastian and so forth.

Bottom line: I don't know when I've read a book with a more intriguing Main Guy as we have in Sebastian. I loved him. True, he has much to make up for, but count on Juliet to lead him on the chase of his life.
Read more
One person found this helpful
Report abuse
See all reviews
Back to top
Get to Know Us
Make Money with Us
Let Us Help You
And don't forget:
© 1996-2021, Amazon.com, Inc. or its affiliates