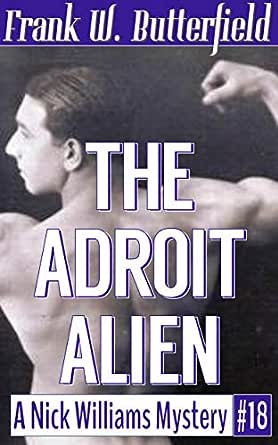 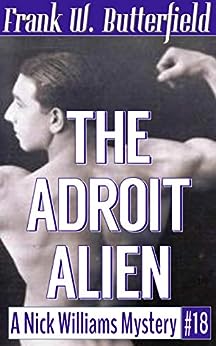 Nick and Carter have arrived safely in Paris and were even greeted at the airport by a minor government official and a small detachment of the famous Republican Guard.

After taking a week to recover from their Christmas adventures in Vermont, they're ready to move into their new house over in the 4th Arrondissement.

It takes three cabs to get the whole gang over there from their hotel and, as they stand on the sidewalk outside, none of them can quite believe what they find: a crumbling building, a trash-filled courtyard, several broken windows, and, as Nick tentatively pushes the front door open, the stench of a rotting corpse.

The police know that none of them could possibly have committed the crime but what about the mysterious Madame Marika, who has suddenly disappeared? Is she back behind the Iron Curtain? Or has she too been murdered?

The entire household gets involved in solving the mystery, dashing around the city that is their new home, and discovering, in the end, the bonds of love and friendship they have brought with them from San Francisco, across the Atlantic Ocean, and to La Ville-Lumière—Paris: The City of Light.

And that's only the beginning...

Ulysses Grant Dietz
4.0 out of 5 stars A series marvelous in its reach and its depth.
Reviewed in the United States on 5 March 2018
Verified Purchase
“Do you sometimes feel like we’re in the middle of a book?”

I described Frank Butterfield’s Nick Williams series to a longtime acquaintance as we waited for the train the other day. I was expressing my amazement that such a long series could sustain both interest and quality. I had another motive, since my friend, a gay man I’ve known for over thirty years, works for a big mainstream publisher, and dismisses gay-themed books as “bad.” He’s a good man, and thirty years ago was movie-star beautiful, but he reminds me of why I read and support both gay/bi authors and gay romance. Gay folk don’t love themselves enough, even today. The internalized homophobia is still there, in every generation, doing its insidious work.

The longevity of Nick and Carter’s adventures is remarkable, especially if, as the author claims, the plots just “come to me out of thin air.” I think Frank Butterfield makes light of his creative faculties. For all that they are not, perhaps, profound books (this isn’t James Michener or Philip Roth—but then, they were homophobes), Butterfield’s Nick Williams series continues to intrigue me and move me. Ultimately, Nick and Carter are just two men who love each other and want to be left alone. In a world that refuses to leave them alone, they use their vast resources to help other queer folk in distress due to the hatefulness of strangers.

“…I know you are very wealthy, but money does not cure all things.”

The story starts and ends with fictitious columns by Art Buchwald excerpted from the International Herald Tribune, a newspaper that used to be in every European hotel lobby, catering to American travelers. The purpose of these excerpts is to point out just how famous Nick and Carter are, and how international their celebrity has become. Nick never reads papers, and thus is oblivious to how recognized not just their lives, but their faces are. Buchwald was a comic writer, and less homophobic than most of his peers. He was still famous well into the 1980s, and I remember reading his column. If Art Buchwald wrote about you, then the world knew who you were. The second of these Buchwald columns, I might point out, is dated on my second birthday.

Forced into exile by J. Edgar Hoover and others in the international intelligence world, it is Nick and Carter who are the adroit aliens of the title. As the earlier books have done with California, this volume does with France, following Nick and Carter—and their band of merry men (and women) on a long trek from a crumbling house in Paris’s Quatrième Arrondissement with a surprise history, through the Alps to Chamonix and Grenoble, and on to the Cote d’Azur, the fabled French Riviera. All along the journey, Nick and Carter spend their money, pick up strays, and deal with the bizarre reality of their wealth and their notoriety. France in the mid-1950s was both a safe haven for nonconformists, and a hotbed of reactionary politics. As they have always been, the French are confusing, arrogant, and fiercely loyal when it suits them. The Riviera was coming into its post-war boom, with the likes of the American-born Princess Grace and the Duke and Duchess of Windsor, and it is a marvelous moment for Butterfield to depict.

Nick seems less angry in this book—because there are plenty of other, angrier people with whom he must cope. But he does weep—weeps for what he has lost, and what he fears to lose. Carter learns to speak French, which for some reason made me fall in love with him even more. There is plenty of hypocrisy in France’s tentative embrace of the most famous gay men in the world, but it has a different flavor than the American hypocrisy of its time.

“…stay vigilant, continue to live your life as you do, and know that you have more friends that you suspect.”

As always, Nick has dreams, and I must say Butterfield is very good with these. However, there is one prophetic moment in this story—akin to the ghost-story-like moments that have appeared in previous volumes—that reminded me that we (if we have read all of Butterfield’s books) know more about Nick and Carter than they themselves know. We don’t have to fear for our gay superheroes, Moneyman and Georgia Boy. Our job is to go along with them on their adventures, and to draw strength from their bravery, their generosity, and their love.

silvia
5.0 out of 5 stars I love my two fave guys
Reviewed in the United States on 3 February 2020
Verified Purchase
This is my fave book of the series. I’m a Francophile so this book was right up my alley. We learn some more of Nick’s family history (that include a few surprises) as Nick and Carter settle into their life in Gay Paree. We meet new endearing characters and some not so likable. Gustaf, Ferdinand, and Nora make the move with them and are treated more like family than household staff. It starts out with Nick and Carter setting eyes on their new house, more like a mansion albeit run down, bought sight unseen for them by Nick’s stepmom. It comes with its own corpse, yeah! We all know it would not be a Nick Williams Mystery without a corpse, lol. But it’s brought to life, the house not the corpse, as Nick and Carter lovingly bring it back to its glory. This delightful mystery is chock full of everything I’ve come to love about my two fave guys! And the fact that it was set in France made me love it even more. Vive la France!
Read more
Helpful
Sending feedback...
Thank you for your feedback.
Sorry, we failed to record your vote. Please try again
Report abuse

John Johnson Jr.
5.0 out of 5 stars Gay Paris
Reviewed in the United States on 29 January 2018
Verified Purchase
The latest entry in the Nick & Carter series finds mystery taking a backseat to romance. In fact, this book really seems to focus more on Nick and Carter’s relationship than many of the other entries as they draw together to start over. In many ways The Adroit Alien pushes reset for the series. They are in a new home in a strange land surrounded my new people. This brings new intrigue and new possibilities, and Mr. Butterfield follows many of the characters’ advice when he “lets Nick be Nick” as this story unfolds.
Read more
2 people found this helpful
Helpful
Sending feedback...
Thank you for your feedback.
Sorry, we failed to record your vote. Please try again
Report abuse

Geoff Whitwell
5.0 out of 5 stars Fantastic series
Reviewed in the United States on 26 January 2018
Verified Purchase
Despite the move to France, Nick and Carter still manage to be involved in murder and mayhem. It was also great to still have characters we had already met be involved in many of the story lines. I spent the whole day reading to finish the book, I just couldn’t put it down.
Read more
3 people found this helpful
Helpful
Sending feedback...
Thank you for your feedback.
Sorry, we failed to record your vote. Please try again
Report abuse

E. Hart
4.0 out of 5 stars Still very good
Reviewed in the United States on 16 February 2018
Verified Purchase
Still very good, but perhaps losing a bit of steam after 18 in the series! Still very strong on character and setting, but the plot on this one seemed a bit disjointed. I'm very much hooked on this author and look forward to the next installment in the series.
Read more
One person found this helpful
Helpful
Sending feedback...
Thank you for your feedback.
Sorry, we failed to record your vote. Please try again
Report abuse
Load more international reviews

Greg Parker
5.0 out of 5 stars Five Stars
Reviewed in the United States on 11 March 2018
Verified Purchase
Another excellent addition to the Nick and Carter story.
Read more
2 people found this helpful
Helpful
Sending feedback...
Thank you for your feedback.
Sorry, we failed to record your vote. Please try again
Report abuse

Ld572000
5.0 out of 5 stars Five Stars
Reviewed in the United States on 17 March 2018
Verified Purchase
As always a good story in a series that is a must read....
Read more
One person found this helpful
Helpful
Sending feedback...
Thank you for your feedback.
Sorry, we failed to record your vote. Please try again
Report abuse