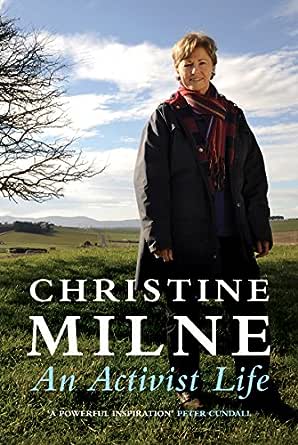 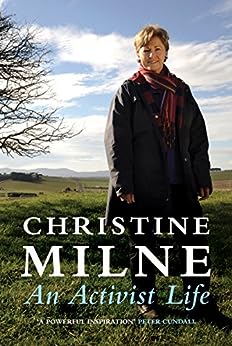 Christine Milne was leader of the Australian Greens from 2012 to 2015. After growing up on a dairy farm at Wesley Vale, she attended boarding school in Hobart and obtained a Bachelor of Arts with Honours in History from the University of Tasmania. From 1975 to 1984 she worked as a secondary school teacher, teaching English, History and Social Science. She first came to public attention for her role in opposing the building of the Wesley Vale pulp mill near Bass Strait in North Western Tasmania on the basis of its environmental impact. She was arrested and jailed in 1983 while protesting the Franklin Dam. In 1993 she became the first woman to lead a political party in Tasmania, and led the Tasmanian Greens for five years through a period of significant reform in the areas of gun control, same-sex relationships and economic reform and at time of considerable turmoil in the forests. She was one of Australia's Bicentennial Women 88 Award winners, was appointed to the United Nations Global Roll 500 of Honour in 1990 for her conservation work, and was elected to the International Union for the Conservation of Nature Global Council in 2000. After finishing her decade-long senate career in 2015, she was appointed as an ambassador for the Global Greens. --This text refers to the paperback edition.

'A woman, a mother, a fighter. A heart-warming inspiration for all who want to make a real difference in this world.' Christiana Figueres, former Executive Secretary, United Nations Framework Convention on Climate Change

'Christine is a force to be reckoned with, a woman to laugh with and a great mentor. Her deep love for nature, concern for the climate and care for people is best expressed in her tenacity, hard work for decades, and little things like pots of homemade apricot jam. Read this book if you want to be inspired to back yourself and work for a better world.' Larissa Waters, former Greens Deputy Leader

'Christine Milne is a powerful champion for the planet and a world-renowned pioneer in Green politics. She has shown the way for many of us, and continues to inspire Greens around the world. Her story is compelling.' Caroline Lucas MP, Co-Leader, Green Party of England and Wales

'Christine Milne has always been much more than an activist. She has long been a powerful inspiration to me and countless thousands of other Australians because of her relentless fight against greed, environmental destruction, war, discrimination and political corruption. Christine Milne will never lose her humanity. She is incorruptible.' Peter Cundall, author and previous presenter of Gardening Australia

'Christine Milne is one of the world's most important environmental voices; to have the story of where she came from and how she has fought her many battles is a great gift, one which will inspire all of us to fight harder and smarter.' Bill McKibben, founder 350.org

Former Greens leader Christine Milne tells her story through 18 objects, interweaving the personal and political to recount a truly inspirational life. --This text refers to the paperback edition.
Read more

2.0 out of 5 stars
2 out of 5
2 global ratings
How are ratings calculated?
To calculate the overall star rating and percentage breakdown by star, we don’t use a simple average. Instead, our system considers things like how recent a review is and if the reviewer bought the item on Amazon. It also analyses reviews to verify trustworthiness.

Margaret O'Neill
1.0 out of 5 stars Politics!!
Reviewed in Australia on 9 October 2018
Verified Purchase
I thought this would be an interesting biography, but alas I found it dull and uninteresting, especially as I'm not very interested in politics!! I read it as a book club discussion book. Not my choice
Read more
Helpful
Report abuse

Jennifer
TOP 10 REVIEWER
4.0 out of 5 stars ‘Timing is everything in politics.’
Reviewed in Australia on 17 May 2018
Christine Anne Milne (née Morris; born 14 May 1953) is a former Australian Senator and was leader of the parliamentary caucus of the Australian Greens from 2012 to 2015. Ms Milne stepped down as leader on 6 May 2015, and was replaced by Richard Di Natale.

I left Tasmania at the beginning of 1974. Green politics was not yet a strong force in local politics, but activists were mobilising. Christine Milne’s name first came to my attention over the proposed pulp mill at Wesley Vale, and again when she was elected to the Tasmanian Parliament in 1989. But it wasn’t until Ms Milne was elected to the Australian Senate in 2004, and then became leader of the parliamentary caucus of the Australian Greens in 2012 that I thought a little more about her involvement in politics. I picked up this book hoping to learn a little more about the woman behind the politician, and was intrigued.

This is not a standard autobiography. Ms Milne writes:

‘I am like a lot of people. People who find it hard to write about how they feel, but will happily explain the history of an object they value. Through their stories of how an object came into their keeping and why it means so much to them you can learn a lot about a person. That is why I have chosen to tell the story of one woman’s life, my life, through objects that matter to me.’

And so it was that I read about Peg Putt’s picnic chair, about the butter pats she keeps as a reminder of her life as a girl growing up on a dairy farm at Wesley Vale, about the Gay Pride T-shirt she wore while marching at Mardi Gras with her son. There are other items, too, which are important to Ms Milne. Through reading about those items, I came to appreciate more of what Ms Milne has achieved as well as the challenges faced by women in politics. I admire Christine Milne’s gritty determination, her dogged persistence in trying to make a difference by ensuring that environmental and social issues are not ignored or forgotten. I could wish that all politicians were as principled as Ms Milne.

Recommended reading for all with an interest in Australian politics.