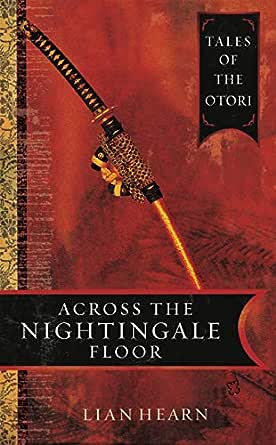 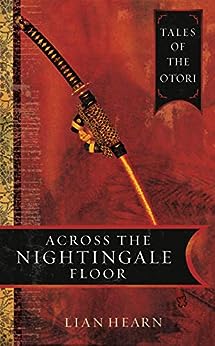 Across the Nightingale Floor: Book 1 Tales of the Otori Kindle Edition

Across the Nightingale Floor was described to me by the young man in Borders bookshop as a "Japanese Harry Potter, only better". In fact, it's a different beast entirely. Much darker, much sharper, much less predictable. * Daily Telegraph * Across the Nightingale Floor remains quite simply the best story of magic, love, sex, revenge and suspense to have come this way since Philip Pullman. * Independent on Sunday *

FOUR MILLION COPIES SOLD. In 40 languages. One of the most thrilling series of our time. Enter the feudal world of the Otori - filled with magic, treachery and intrigue - inspired by medieval Japan and created by acclaimed Australian author, Lian Hearn.

'The best story of magic, love, sex, revenge and suspense to have come this way since Philip Pullman.' INDEPENDENT ON SUNDAY

In his fortress at Inuyama, the murderous warlord Iida Sadamu surveys his famous nightingale floor. Constructed with exquisite skill, it sings at the tread of each human foot. No assassin can cross it unheard.

Brought up in a remote village among the Hidden, a reclusive and spiritual people, Takeo has learned only the ways of peace. Why, then, does he possess the deadly skills that make him so valuable to the sinister Tribe? These supernatural powers will lead him to his violent destiny within the walls of Inuyama - and to an impossible longing for a girl who can never be his. His journey is one of revenge and treachery, beauty and magic, and the passion of first love.

INCLUDES an extract from GRASS FOR HIS PILLOW PLUS three chapters of EMPEROR OF THE EIGHT ISLANDS, the first novel in Lian Hearn's spellbinding new Tale of Shikanoko series.

'One of the most thrilling series of our time.' THE TIMES

' ... a world that is rich with character and detail, yet effortless to read' SYDNEY MORNING HERALD

'An engrossing fantasy saga of literary quality.' THE AGE

NicShef❤️Reading
#1 REVIEWER
5.0 out of 5 stars Compelling, fantasy that stands the test of time...
1 January 2018
Format: Kindle EditionVerified Purchase
It is a number of years since I read the "Tales of the Otori" series and as it was a kindle daily deal and I wanted the kindle version for my library as my paperbacks go walk about a lot... I bought it. However once I started reading it, I couldn’t put it down again as it was just as Excellent as I had remembered it.

‘Across the Nightingale Floor’, (Tales of the Otori - Book 1) brings the reader into a truly unique fantasy world, entering the feudal world of the Otori. It’s filled with magic, treachery and intrigue - inspired by medieval Japan and created by Australian author, Lian Hearn. Unlike most fantasy stories however neither dragons nor magic play a role. There are warriors like samurai and assassins like ninja's called the Tribe but there are groups of people that are entirely fictional like the Hidden who have very controversial religious beliefs that result in them being disliked.

In one of the Hidden villages called Mino we meet the main character Tomasu who is a young and adventuress boy who likes to explore the forest and it is this habit that saves his life when his village is attacked by the most powerful man in the Three Countries - Ida. Tomasu bumps into a man named Shigeru Otori who saves his life. From that point onwards his life changes forever and his name is replaced with Takeo Otori to prevent him from being discovered as one of the hidden.

Takeo has modest and quiet abilities that separate him from others around him although Takeo has learned only the ways of peace he possess deadly skills & supernatural powers. He has inherited these skills from his deceased father which allows him to go invisible, have sharp hearing, make a double of himself to distract opponents and put people to sleep with a few seconds of staring. Woven into the story is love through his meeting of the beautiful Kaede ... which makes things very complicated.

This book is classed as a cross over from Young Adult to Adult and due to its sexual content and occasional language and intricate plot I would say 15+years and above would be transported by it.

Overall, this is an intelligent book with war and romance at its centre along with characters that draw you even deeper into the story. Once you work out who the various, yet similarly named characters are it is an incredibly compelling story, well structured but with twists that take you by surprise. Once you start you’ll want to read the entire series (at least once!)

Carolyn Harris
TOP 500 REVIEWER
5.0 out of 5 stars Thank you for leading me to this
30 January 2017
Format: Kindle EditionVerified Purchase
It has been so long since I have been so near to anything so powerful and yet fragile. It has recalled the beliefs I had as a young women before 'real life' stepped in and made me forget.

Please don't let the film makers grab this one, it's fragile beauty and rhythm would be destroyed.
Read more
Helpful
Comment Report abuse

Phil
5.0 out of 5 stars Great stuff!!!
16 February 2015
Format: Kindle EditionVerified Purchase
This was a great read!! At first you notice how massive each chapter is and it does take some time to get used to it. The characters are extremely well formed and the imagery is excellent. The author has a very good handle on the Japanese mind set and culture.
At times I felt as though I did get a little snowed under with information cramming and sudden sequence jumps but overall it flowed quite well.
I would def recommend this to anyone interested in feudal Japan, martial arts, myth and history. An excellent story!!!
Read more
Helpful
Comment Report abuse

Jenny miles
4.0 out of 5 stars A beautiful poetic tale
28 November 2015
Format: Kindle EditionVerified Purchase
You are instantly transported to feudal Japan, with its rigid way of life. The main character Takeo draws you in and never lets you go. The lyrical descriptions of the landscape, animals and wildlife transport you seamlessly from the humdrum world we inhabit, and it feels as though you're in a brilliant dreamy other world.
Once you work out who the various,similarly named characters are there is a compelling story, well structured but with twists that take you by surprise.
Eagerly anticipating the next volume. Absolutely recommended.
Read more
Helpful
Comment Report abuse

Kindle Customer
5.0 out of 5 stars Beautiful
17 July 2017
Format: Kindle EditionVerified Purchase
A book that delights the senses. She introduces us to the Japanese culture and mores effortlessly. I can't wait for the sequel.
Read more
Helpful
Comment Report abuse

Colleen2630
5.0 out of 5 stars Just superb
16 May 2017
Format: Kindle EditionVerified Purchase
This was my third reading. I'm sure it won't be my last visit to Lian's magical world set in feudal Japan.
Read more
Helpful
Comment Report abuse

Mr. Gregory P. Solomon
5.0 out of 5 stars Enjoyable beginning to end
14 March 2017
Format: Kindle EditionVerified Purchase
Enjoyable from the very beginning with a good plot and nit so many characters that you got confused as you read further into the story line.
Read more
Helpful
Comment Report abuse
There are 14 customer reviews and 16 customer ratings.
See all 14 customer reviews
Write a customer review

Go to Amazon.com to see all 10 reviews 3.8 out of 5 stars
Get FREE delivery with Amazon Prime
Prime members enjoy FREE Delivery and exclusive access to movies, TV shows, music, Kindle e-books, Twitch Prime, and more.
> Get Started
Back to top
Get to Know Us
Make Money with Us
Let Us Help You
And don't forget:
© 1996-2020, Amazon.com, Inc. or its affiliates