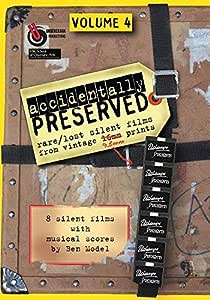 ACCIDENTALLY PRESERVED: RARE AND LOST SILENT FILMS FROM VINTAGE PRINTS is a DVD series of rare/lost silent film shorts that only survive because home-use copies of silent movies were made in the 1920s, 30s and 40s for people to rent and watch at home. This FOURTH VOLUME of rare silent comedies and dramas contains rare 1930s prints made in the 9.5mm film format by the Pathéscope company (UK).

The films on this DVD are presented in new HD digital transfers with new musical scores by renowned silent film accompanist/historian Ben Model. The 9.5mm prints themselves were sourced from the USC Hugh M. Hefner Moving Image Archive. Stars include Bobby Ray, Glenn Tryon, Colleen Moore, Warner Baxter, Mae Marsh, Flora Finch, Pete the pup and more. Unavailable to the public for decades, these delightful comedy shorts are now back onscreen, entertaining fans all over again!

When sold by Amazon.com, this product is manufactured on demand using DVD-R recordable media. Amazon.com's standard return policy will apply.

Frank Commins
5.0 out of 5 stars Another Winner In The Series...
12 November 2016 - Published on Amazon.com
I've been very pleased with the "Accidentally Preserved" series, and this collection of short films released on the 9.5mm format is no exception. Beginning with the outstanding introduction which gives a solid historical perspective to this small gauge, through the individual films themselves, this DVD is a real treat. Some thoughts on the shorts..."Nonsense"-Starts out as pure slapstick and evolves into a satire on the Western motif (Bill Hart would be proud); "The Ninety And Nine"-Colleen Moore channels Lillian Gish in an abridgement of the feature which should please railroad fans; "Meet Father"-All hail Josephine the Chimp, Pete the Pup, and Glen Cavender the Heavy; "The Wages of Tin"-Just goes to show that driverless cars were an option well before the current day; "Tides of Passion"-Vitagraph, J. Stuart Blackton and Mae Marsh (what can be more quintessentially silent than this combination?); "A Man's Size Pet"-Fast moving Western comedy; "Walter's Paying Policy"-Slapstick, British Style, with the affable Walter Forde; and "Morning, Judge"-the Fleischer Brothers turn to live action and resurrect the "Bangville Police" to (what else) disastrous results. Each one of these entertaining high-quality shorts is accompanied by an outstanding score. The film gauge may have been small, but the enjoyment of each film is huge. Don't miss this awesome collection !
Read more
10 people found this helpful

Peter Bainbridge
5.0 out of 5 stars You need this disc
8 December 2016 - Published on Amazon.com
Another nice set of short films in the series. These are a mixed lot, some dramas, mostly comic. Well worth a purchase for any fan or student of silent films.
Read more
One person found this helpful