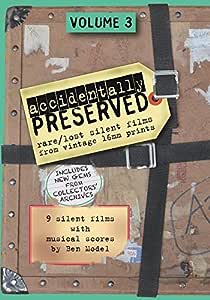 ACCIDENTALLY PRESERVED: RARE AND LOST SILENT FILMS FROM VINTAGE 16MM PRINTS is a DVD series of rare/lost silent film shorts that only survive because 16mm copies of silent movies were made in the 1920s, 30s and 40s for people to rent and watch at home. This THIRD VOLUME of rare silent comedies mines its obscure gems from the shelves of dedicated film collectors. The nine rare / lost silent films on this DVD are presented in a new HD digital transfer with a new musical score by renowned silent film accompanist/historian Ben Model, performed on piano or theatre organ. Stars include Mr. and Mrs. Sidney Drew, Arthur "Dagwood" Lake, and a very young Billy Barty among many others. Unavailable to the public for decades, these delightful comedy shorts are now back onscreen, entertaining fans all over again! THE FILMS: Mr. & Mrs. Sidney Drew in WANTED, A NURSE (1915), Bobby Ray in SERVICE A LA BUNK (1921), unid. prank film: A CITRATE SPECIAL (192?), Joe Rock in THE WHIRLWIND (1922), Jack Duffy in NO VACANCIES (1923), Anne Cornwall in LOVE'S YOUNG SCREAM (1928), Big Boy in HOT LUCK (1928), Arthur Lake in WHOSE BABY? (1929), and Billy Barty in HALF A HERO (1929/30).

When sold by Amazon.com, this product will be manufactured on demand using DVD-R recordable media. Amazon.com's standard return policy will apply.

Charles Morrow
5.0 out of 5 stars Another goody basket of rare silent comedies
18 September 2015 - Published on Amazon.com
Good news for silent comedy buffs! There’s a new installment of ‘Accidentally Preserved,’ brought to you by Ben Model and the folks at Undercrank Productions. This DVD series offers very rare comedies (along with the odd cartoon or industrial short) which survive today only because they were made available, long ago, for home use in the 16mm format. Now held by collectors, these prints often represent the only known copies to be found anywhere. Mr. Model, a renowned silent movie accompanist, presents these offbeat rarities with his dynamic scores, along with introductory notes by film buff extraordinaire Steve Massa, who provides useful background information on each short’s personnel, production history, and related matters. This series has been a real treat for fans. For those of us who are middle-aged, opening up a new disc of Accidentally Preserved selections is like a flashback to the ‘70s, when a package of brand new prints would arrive in the mail from Blackhawk. (Only nowadays we don’t have to thread any projectors.)

Volume 3 is another goody basket of rarities. I have several favorites in this set, especially Joe Rock’s THE WHIRLWIND (1922), a delightfully surreal, dreamlike comedy that’s surprisingly elaborate. The star of WHOSE BABY? (1929) is Arthur “Dagwood” Lake, who is quite engaging as a well-meaning young fellow trapped into tending the baby of a busy shopper. It’s always a pleasure to see Mr. & Mrs. Sidney Drew, who were so adept with marital comedy. In WANTED, A NURSE (1915), Mr. Drew fakes illness so that he can make time with a pretty nurse—played, of course, by Mrs. Drew. I would bet this premise was already familiar to audiences a century ago, but the Drews always manage to find humor in every situation. Only the second reel of HALF A HERO (1929/30) was available for preservation. This short was shot silent but dubbed with music, sound effects, and a few lines of dialog, and is thus the only selection for which Mr. Model did not supply a score. It features famed midget actor Billy Barty, approximately 5 years old and plenty lively. HALF A HERO concludes the set on a suitably wacky note.

But I’d be remiss if I neglected to mention A CITRATE SPECIAL, the shortest but easily the most memorable selection on the disc. This film, possibly made as a prank for screenings at parties, must be seen to be believed. Our lead player is character actor Thurston Hall, familiar from his many appearances as politicians, military officers, and other dignified authority figures . . . but after seeing him in this, I can never regard him quite the same way again. Beyond that, I’ll say only that if you thought scatological humor was introduced to the screen in BLAZING SADDLES, this short will be most enlightening.

At the risk of echoing what everyone else has been saying about this series, I salute Mr. Model and his team for their heroic efforts to share these rare films with the public. And I, too, look forward to the next volume!

Frank Commins
5.0 out of 5 stars Another Entry In An Excellent Series !
27 September 2015 - Published on Amazon.com
It's a real privilege to be able to view these silent films, which, were it not for the proliferation of 16mm rental libraries, would most likely have been lost to the ravages of time. Each one of them is a gem, and many feature talented comedians at the height of their prowess. This is the third DVD in a wonderful series that has captured silent comedies from the brink of destruction. These are professional productions, with top-notch visual restorations and carefully crafted scores. I'm already looking forward to Volume 4...
Read more
2 people found this helpful

Mark Martucci
5.0 out of 5 stars Mr. & Mrs. Drew are a delight!! Equally as good as the first two.
27 September 2015 - Published on Amazon.com
Who says you are not lucky? You're lucky that these gems have stayed with us.
I was going to say that these collections just get better and better as they come out. That's not true. They are all excellent.
Get this if you love silent comedy.
Get this if you like to laugh!! It will make you do that. More please!
Read more

Dave Glass
5.0 out of 5 stars It's no accident that this is a hit!
27 September 2015 - Published on Amazon.com
Can't get enough of this series. More rare shorts presented in the best possible way with the wonderful Ben tinkling on the ivories (well, probably bits of plastic if the truth be told) but if you love silent comedy you'll love this! Can't wait for the next Accident.....
Read more
2 people found this helpful
Go to Amazon.com to see all 9 reviews 5.0 out of 5 stars