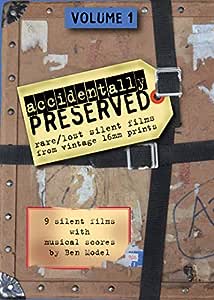 "Accidentally Preserved: Rare and Lost Silent Films from Vintage 16mm Prints" is a collection of nine short films made from 1920-1928 that only exist because 16mm prints were made in the 1920s and 1930s for home rentals. The films are all new to DVD - three of them have not been seen by anyone in several decades, and have new musical scores on piano or theatre organ by Ben Model. During the 1930s and 1940s companies like the Kodascope and Universal Show-At-Home libraries made 16mm copies of silent movies for people to rent and watch at home. It was like Netflix for the art deco era. Because these movies were on 16mm safety film, many of them have outlived the original 35mm nitrate prints of silent films that are now lost or extremely rare. It's as if these movies were... Accidentally Preserved. Unavailable to the public for decades, these delightful comedy shorts - as well as the lost, unknown Elgin Watch factory film - return to screens to entertain us once more. The films of Accidentally Preserved: volume 1: Wallace Lupino in THE LOST LAUGH (1928) - Jack Duffy in LOOSE CHANGE (1928) - Monte Collins in WEDDING SLIPS (1928) - Paul Parrott in SHOOT STRAIGHT (1923) - Elgin Watch Company - THE HOUSE OF WONDERS (ca. 1931) - Clyde Cook in THE MISFIT (1924) - Cliff Bowes in CHEER UP (1924) - Koko the Clown in MECHANICAL DOLL (1922) - Billy Franey in THE WATER PLUG (1920). Region 0. [Note: This product is an authorized, licensed DVD and is manufactured on demand]