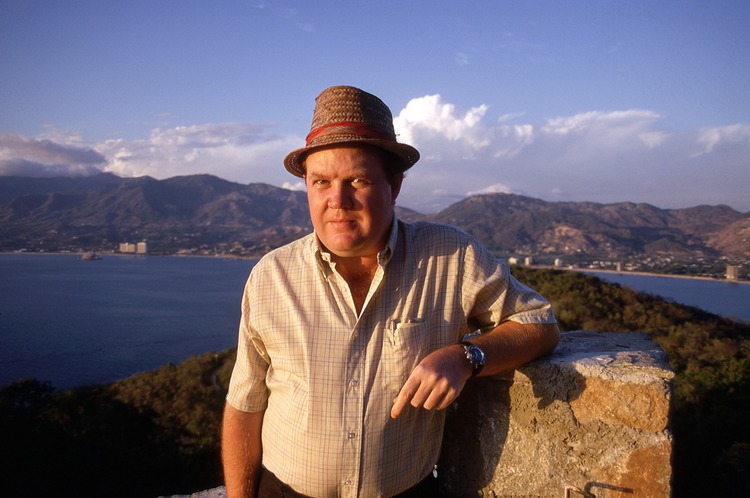 Edwin Corley was born in Bayonne, New Jersey, on October 22, 1931. The son of Gordon and Lillian Neal Corley, he and his brother Richard grew up poor and moved frequently as their father sought work during the Great Depression. They lived for a time in Pascagoula, Mississippi and Falls of Rough, Kentucky before finally settling in Anniston, Alabama where Lillian had family. He wrote his first published work for the junior high school newspaper and sought to read every work of fiction that the school’s library owned.

In 1945, Corley lied about his young age and enlisted in the United States Army Air Corps as World War II wound down. He was stationed on Tinian when the Enola Gay made her fateful flight to Hiroshima, and then spent several years in occupied Japan writing for the Stars and Stripes. During his final assignment at Patrick Air Force Base in Florida, Staff Sergeant Edwin Corley enrolled in an English composition course where he turned out a new short story every week (many were later published in Combat Pay, a book of short stories which he co-wrote (uncredited) with Robin Moore); his instructor, Mrs. Elizabeth Sherman Swing, commented in 2009: “I have never before or since encountered such evidence of the Nature side of the Nature/Nurture controversy. Corley was born to write.”

After his honorable discharge from the United States Air Force in 1952, Corley took odd jobs that enriched his life with the most unusual of experiences. He travelled the countryside with a carnival as both a midway barker and fire-eater (a lifestyle which later became the focus of his sixth novel, Big Saturday), plied the highways as a truck driver, and even spent time as a Greenwich Village private detective. It was Corley’s writing which got him an actual career, however, and soon he settled into the advertising business as a copywriter penning underwear ads for Montgomery Ward. He changed firms occasionally, each time accepting more responsibility and enjoying more creative freedom. It was while he was an agency producer for Compton Advertising in 1962 that he met Betty Zekauskas, a food stylist at New York City’s ABZ Studios where Corley was shooting a commercial. They were married in July of the following year.

During the 1960’s, while still working full-time as an advertising executive, Corley dabbled in documentary filmmaking, winning three Robert Flaherty Awards and a Silver Medal at the Cannes Film Festival. He began work on his first novel, Siege, which was published to wide acclaim in 1969. It was quickly followed by the best-seller, The Jesus Factor, in 1970. It was during this period that Corley also became a Vice President of the Dancer, Fitzgerald, Sample Advertising Agency. With the confidence gained by the success of his first two novels, Ed resigned his newly-awarded position and left Madison Avenue to pursue the career of a novelist.

The 1970’s saw an explosion of creative output from his typewriter (now an IBM Selectric modified to ‘store’ his work on long rolls of paper tape). His third novel, Hijacked, was the first he wrote using a pseudonym: David Harper. He would later add three more monikers to the mix, each specializing in a different genre: Will Collins, Patrick Buchanan, and William Judson. Ed felt it was very important not to confuse his various audiences: “If you went through the trouble to buy a box of Jell-O, but then discovered a martini inside when you got it home, you wouldn’t necessarily be disappointed – but it wasn’t what you were expecting to find.”

Like Siege, Hijacked was a timely novel written at precisely the right moment. It was almost immediately picked up by MGM Studios and made into the very successful film Skyjacked, starring Charlton Heston and James Brolin. Corley’s thirteenth novel, Cold River, written only four years after Hijacked, was a timeless story that remained in print far longer than all the rest. It, too, became a motion picture starring Richard Jaeckel, Suzanne Weber, and Pat Petersen. Corley’s only novelization, Grizzly, was a work-for-hire he created for Film Ventures International using the pseudonym of Will Collins. While Corley’s family enjoyed the Christmas holidays of 1975, he wrote Grizzly in only nine days.

Ed and Betty Corley had three children: Richard, Lizzy, and Eugene. They left New York City in 1970 and moved to upstate New York, near the tiny village of Sherburne. For four years, Ed again opened himself to remarkable experiences: he hunted white-tailed deer with his close friend and neighbor, Fred Boyson, explored new walleye fishing holes that were 90 miles from the nearest road in the Canadian wilderness, and flew gliders in Elmira with Paul Schweizer. The winters were brutal, however, and faced with Betty's half-joking threat of divorce if he didn’t do something about them, Ed relocated his family to Pass Christian, Mississippi, in 1974.

Corley finally found his stride during the late 1970’s and slowed his writing. This allowed him to concentrate on only one to two novels per year, and these tended to be bigger and more-involved projects. Sargasso, Air Force One, The Genesis Rock, and Long Shots were all highly-researched and crafted novels; by now, his IBM Selectric typewriter had been exchanged for a state-of-the-art Lanier word processor and daisy-wheel printer. The slower pace in Mississippi also gave him time to enjoy what the Gulf Coast had to offer: on most afternoons, he could be found fishing from his wooden cabin cruiser Sargasso, exploring the Mississippi Delta backcountry with his family in their Winnebago, or heading to the nearby New Orleans French Quarter with Betty to meet friends.

As 1981 turned to summer, with a new novel about the B-17 Flying Fortress in production and an upcoming mystery series under contract, the world of Edwin Corley abruptly and irrevocably capsized. Only 4 days after her 47th birthday, Betty succumbed to a very brief and seemingly innocuous illness. Ed wrote her funeral card himself: “Betty took sunshine everywhere she went. Perhaps somebody knew her without loving her, but we’ve never met one… she left a little bit of happiness on everything she touched.” The weeks and months that followed Betty’s death were difficult and ultimately impossible for Ed to endure. He, too, developed a simple malady that a single visit to a doctor would have cured, but for weeks he resisted getting the care he needed; when it finally arrived, it was too late.

On November 7th, 1981, almost four months to the day after Betty passed away, Edwin Corley died at age 50. Their cremains are interred together at St. Mary’s Annunciation Cemetery in Pringle, Pennsylvania, not far from the home where Betty was born.

R Gabriel
5.0 out of 5 stars Nostalgic but still relevant and thought provoking and entertaining
Reviewed in the United States on 15 October 2014
Verified Purchase
I read this back in the '70s and loved it. Just read it again and it still makes you think even with states starting to legalize pot.
Read more
Report abuse

Amazon Customer
4.0 out of 5 stars Another good one by Corely
Reviewed in the United States on 1 July 2014
Verified Purchase
Another good book from Edwin Corley. If you get a chance, check out his other books. He's been gone for a while now, but his books are still a great read.
Read more
One person found this helpful
Report abuse

Russell Norman Cobleigh
5.0 out of 5 stars good now as it was then...
Reviewed in the United States on 26 March 2013
Verified Purchase
this book was way ahead of its time, as Colorado and Washington have legalized Marijuana, I first read it as a teenager and it holds up well now.
Read more
3 people found this helpful
Report abuse
See all reviews
Back to top
Get to Know Us
Make Money with Us
Let Us Help You
And don't forget:
© 1996-2021, Amazon.com, Inc. or its affiliates