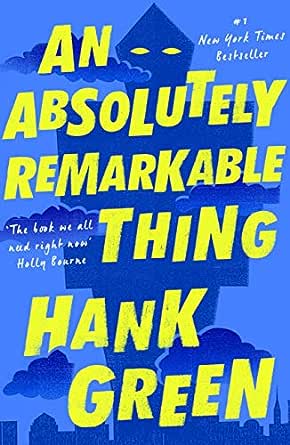 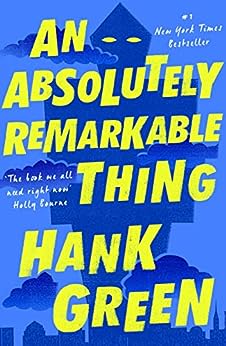 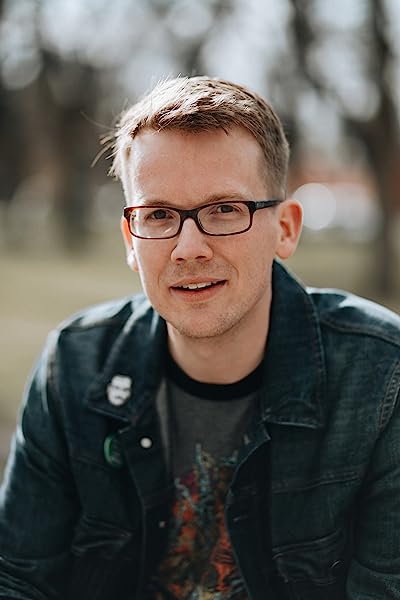 An Absolutely Remarkable Thing is such a beautiful exploration of what humans can accomplish when we collaborate effectively - John Green, bestselling author of The Fault in Our StarsClever, resonating and funny, tackling socially relevant themes . . . Get ready to be absorbed in the story, glued to the book and a little more afraid of Twitter - StylistFun and full of truth. To be honest, I'm a little irritated at how good the book is. I don't need this kind of competition. - Patrick Rothfuss, bestselling author of THE NAME OF THE WINDI really loved this one - loved the voice, loved what it had to say about fame/being a public figure, loved its honesty. Definitely a new favorite, and I'm already hyped for the sequel. - Becky Albertalli, award-winning author of SIMON VS THE HOMOSAPIENS AGENDAThe book we all need right now - Holly Bourne

In his much-anticipated debut novel, Hank Green - co-creator of Crash Course, Vlogbrothers and SciShow - spins a sweeping, cinematic tale about a young woman who becomes an overnight celebrity before realizing she's part of something bigger, and stranger, than anyone could have possibly imagined.
See all Product description

Pieter
2.0 out of 5 stars Well written, but disappointing.
6 November 2018
Format: Kindle EditionVerified Purchase
This is not a genre that I have rad much, so it is hard to place this book. Young adult fiction focused on praising humanity would probably be enough to keep me away. However, I have grown to like Hank, having followed him on YouTube for years and was curious what he would write.
The story itself did not impress me much, but if your if you're into feel good pop fiction, then you might enjoy this. Hank mentions in the acknowledgements that he had some help keeping his biases in check, but of all the the vlogbrothers episodes I have watches, this was Hank at his least critical about society, with disappointing stereotypes and little thinking about the world 'complexly'.
Hank, your villains (republicans, China, Russia and people who fear uncertainty) are tropes and you could have spent a little more time helping your audience understand them more complexly by giving them some redeeming qualities. Instead you have re-enforced stereotypes that I have heard you speak against multiple times. I wanted to abandon the book multiple times, but kept at it hoping that there would be some realisation the 'other' is not always the enemy that we imagine. April speaks at least once about how she strawmans her enemies, so there was certainly opportunity. I was disappointed that you missed this opportunity and felt a little betrayed.
Overall the book is a shameless praise of neo-liberal Western culture and how amazing humanity is. Especially the humanity of neo-liberal Western culture.
One thing that I did appreciate was Hank's insight into fame and the effects on an individual. This is something worth writing about, because Hank, despite never having met you in person, you seem to handle it better than most.

Dan
5.0 out of 5 stars Do Yourself a Favour
3 November 2018
Format: Kindle EditionVerified Purchase
This is a brilliant book by first time author Hank Green. It's clear that this writing talent runs in the family. An Absolutely Remarkable Thing is a gripping, thrilling page turner that explores themes of fame, sexuality in a social media world. Hank has created a world that is a true reflection of our society. If you only read one book this year make it An Absolutely Remarkable Thing.
Read more
Helpful
Comment Report abuse

Jacquelyn
3.0 out of 5 stars thought provoking
19 December 2018
Format: Kindle EditionVerified Purchase
Although it took me a little longer to get through this than I imagined, I'm glad I did.
Green gives a thought provoking look at fame, identity, human frailty, and the way our convictions shape society - for better or worse.

Geoff Bromilow
5.0 out of 5 stars one of in trigue and whimsy
25 October 2018
Format: Kindle EditionVerified Purchase
honestly, i devoured this thing instead of studying for my exams (in 4 days). it is as beautiful as april may is flawed, a story about fame, and trying to be good, those we love and those things we can't understand

Margaret O'Donnell
5.0 out of 5 stars A creative look at important modern themes
6 January 2019
Format: Kindle EditionVerified Purchase
A completely enjoyable read. Well written with thoughful exploration of some of today's important themes. A great amalgam of of fantasy and reality set in the world of instant communication dominated by twentysomethings.
Read more
Helpful
Comment Report abuse

Amazon Customer
5.0 out of 5 stars It was every bit as good as I expected and more
14 February 2019
Format: Kindle Edition
I loved this book. I truly believed in the characters. April had a strong voice throughout. It amazed me how well Hank captured the feelings and emotions of a early 20 something year old bisexual. I loved his choice to have such strong female characters.

Go to Amazon.com to see all 480 reviews 4.4 out of 5 stars
Get FREE delivery with Amazon Prime
Prime members enjoy FREE Delivery and exclusive access to movies, TV shows, music, Kindle e-books, Twitch Prime, and more.
> Get Started
Back to top
Get to Know Us
Make Money with Us
Let Us Help You
And don't forget:
© 1996-2020, Amazon.com, Inc. or its affiliates