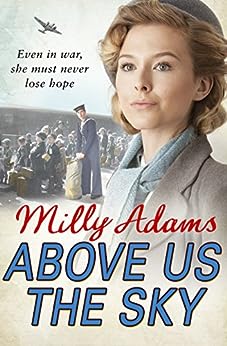 Above Us The Sky Kindle Edition

by Milly Adams (Author) Format: Kindle Edition
See all formats and editions
Sorry, there was a problem loading this page. Try again.

THE FIRST SECOND WORLD WAR NOVEL FROM MILLY ADAMS.
Evacuees, the WI, and keeping calm and carrying on. Perfect for fans of Katie Flynn and Ellie Dean.

'Well researched, with an engaging heroine and a delightful ending.'
Anna Jacobs on At Long Last Love
********
As the threat of bombing raids intensifies, newly-qualified teacher, Phyllis Saunders, is evacuated with her school to Dorset.

Here she encounters prejudice and suspicion. But she is determined to make the best of life, for herself and the children in her care. All the while her fiancé and submariner, Sammy, is facing danger out at sea.

Then the Blitz hits London and Phyllis, trying to persuade her mother to return to Dorset with her, gets caught up in it herself. Shaken but alive, she returns to the relative peace of the countryside. But soon she is nursing a secret she can tell no one.

Until the news that Sammy's submarine has been sunk reaches her, and she is forced to make a decision she hopes she will never regret…

THE FIRST SECOND WORLD WAR NOVEL FROM MILLY ADAMS. Evacuees, the WI, and keeping calm and carrying on. Perfect for fans of Katie Flynn and Ellie Dean. As the threat of bombing raids intensifies, newly-qualified teacher, Phyllis Saunders, is evacuated with her school to Dorset. ― FROM THE PUBLISHER'S DESCRIPTION

Well researched, with an engaging heroine and a delightful ending. -- Anna Jacobs on At Long Last Love

Milly Adams' readers will find the story and its rich cast of characters very appealing. -- Lizzie Lane on At Long Last Love --This text refers to the paperback edition.

Milly Adams lives in Buckinghamshire with her husband, dog and cat. Her children live nearby. Her grandchildren are fun, and lead her astray. She insists that it is that way round.
Milly Adams is also the author of Above Us The Sky and Sisters At War. --This text refers to the paperback edition.

A compelling new wartime saga. --This text refers to the paperback edition.


On one of the hottest days of the year, newly-qualified teacher Phyllis Saunders is evacuated with her school to Dorset.

As she struggles to control the crowd of tearful children, she sees Sammy. Her oldest and dearest friend is on the way to join his submarine, and as he kisses her goodbye, everything changes for them.

But now that war is tearing them apart, is it too late?
Phyllie throws herself into village life, determined to protect and nurture the children in her care. But war leaves no one untouched, and Phyllie will need all the support of the community to help her through the next few years, as she waits and prays for Sammy’s safe return… --This text refers to an alternate kindle_edition edition.
Read more

Jyne Mills
4.0 out of 5 stars Unimaginable Times
Reviewed in the United Kingdom on 7 September 2020
Verified Purchase
Very thoughtful book. To lose one love and find another is a remarkable fate but in war time even more so. The love for the children is a story in itself. Enjoyale.
Read more
Report abuse

Mrs Eve Smith
5.0 out of 5 stars Five Stars
Reviewed in the United Kingdom on 22 September 2017
Verified Purchase
Super read unable to put it down once started to read
Read more
2 people found this helpful
Report abuse

vjj
5.0 out of 5 stars Fantastic story, didn't want it to end.
Reviewed in the United Kingdom on 12 February 2019
Verified Purchase
Good read, lovely story about evacuees. Good strong characters. Going to look for other books by dame author if I can.
Read more
Report abuse

Jeanie
5.0 out of 5 stars Excellent Book
Reviewed in the United Kingdom on 22 July 2020
Verified Purchase
Loved the book, great read, didn't want to put it down.
Read more
Report abuse
See all reviews
Back to top
Get to Know Us
Make Money with Us
Let Us Help You
And don't forget:
© 1996-2021, Amazon.com, Inc. or its affiliates