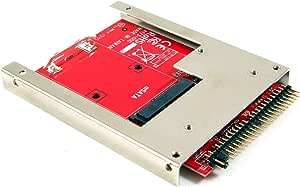 4.5 out of 5 stars
4.5 out of 5
158 global ratings
How are ratings calculated?
To calculate the overall star rating and percentage breakdown by star, we don’t use a simple average. Instead, our system considers things like how recent a review is and if the reviewer bought the item on Amazon. It also analyses reviews to verify trustworthiness.

John Feinberg
5.0 out of 5 stars Powerbook G4 - works great w/Samsung 860evo 512Gb
Reviewed in the United States on 22 November 2018
Size Name: IDE (2.5" Drive)Colour Name: mSATA SSD to IDEVerified Purchase
I used this adapter to install a Samsung 860 evo 512Gb m.2 SATA SSD. It works just great. First I used an external USB IDE enclosure, and put this adapter (with the Samsung m.2 drive inside) and formatted the drive. Then I used Carbon Copy Cloner to replicate my internal drive. Carbon Copy Cloner gave a message that my external USB 2 drive was not bootable, but I ignored that. After the replication was complete, I used the iFixit guide for my Powerbook G4 and disassembled the laptop. I then removed the hard drive, and put this adapter (with the m.2 drive inside) in its place. The computer now boots perfectly with this drive. Curiously, I see only about 460Gb, not the total 512Gb . When I copy files over the network (via gigabit ethernet), I see speeds of up to 60Mb/sec. This usually uses about 90% of the CPU capacity. Certainly this is a LOT faster than the original IDE drive could manage. I bought the Samsung 860 evo. for this laptop for 2 reasons. First - I just wanted to see if it would work in this laptop! 2nd, I wanted a big drive for this laptop to store lots of movies. The laptop is a 17" G4, and we mainly use it for watching movies. Because it's a SATA SSD, even if it doesn't work (or if we stop using this laptop) I can always take the SSD out and use it somewhere else.
Read more

KryptoNyte
5.0 out of 5 stars Brings old hardware back to life - highly recommended, even for Windows XP.
Reviewed in the United States on 23 April 2018
Size Name: IDE (2.5" Drive)Colour Name: mSATA SSD to IDEVerified Purchase
I just installed this in an old Acer TravelMate 4072WLCi laptop (still on Windows XP), along with a Samsung 860 EVO 250GB mSATA Internal SSD (MZ-M6E250BW). I did not have an external PATA IDE adapter, so I had to create an image of the original hard drive (80GB 2.5" fujitsu) while still in the machine to an external USB drive using Acronis True Image Home, and also created a bootable USB thumb drive with Acronis. Fortunately, the USB flash drive appeared as a bootable hard drive in the system BIOS after installing the new hard drive and adapter, and with the flash drive and the external hard drive plugged in, I was able to boot Acronis' own recovery system from the flash drive, and reinstate the original hard drive image to the new EVO 250. After reinstating the image, the system booted immediately, without issue. As long as you know how to image and reinstate an operating system to new media, this is a painless process.

Before this upgrade, a full boot up and shutdown might take nearly 10 minutes. The system boots to login screen in under 20 seconds, and then about another 15 seconds to settle down and ready for work. System shutdown us about 30 seconds. I had thought this laptop just wasn't a candidate for an SSD upgrade, but what a remarkable difference. Thanks for the adapter.

FCS
5.0 out of 5 stars Revived 15 year old laptop
Reviewed in the United States on 6 May 2020
Size Name: IDE (2.5" Drive)Colour Name: mSATA SSD to IDEVerified Purchase
I have a 15 year old Dell 700m laptop that I really liked. It has apps that I accidentally deleted from other PCs plus some apps that don't run well on WIN 10 in compatibility mode. It was too old for a Chromebook upgrade. It was not upgradable to WIN 7. The BIOS did not support AHCI and would run the mSATA transparently thru the IDE/PATA interface . I had a 32Gb mSata card pulled from another laptop, found the Ableconn IIDE-mSATA and figured that I could put the mSATA in the Ableconn, connect it to a 44pin USB 2.0 adapter that I had and connected it to the Dell. It worked, I was able to format the mSATA and I bought a 128Gb mSATA card (Zheino M3), repeated the effort on the larger mSATA. I had to buy AEOMI Backupper Pro ($39; the freebee won't clone a disc) and replicated the 80Gb Hitachi HDD. Installed the Ableconn w/mSATA in the 700m. It replaced Hitachi HDD perfectly, no need for the provided screws. It booted immediately, ran beautifully for a day, then slowed down. the barely ran. Pulled the mSATA and did some homework: Removed the master/slave jumpers from the Ableconn, left the unused portion of the mSATA unformatted, (I had created a partition in this space) and downloaded SSD Tweaker (free) to set the WIN XP parameters for optimum SSD performance.

Re-Cloned the HDD > mSATA, reinstalled in the 700m and the PC has been running beautifully since. Not sure what fixed the original problem but its 20 sec to Logon, another 20 sec to useful work. Outlook 2007 takes a long time to startup, but then just fine. It's not as fast as native mSATA since its running thru the 44pin EIDE interface but its a much more useful PC and I don''t dread the wait time when I boot it up. I also upgraded to SSD Tweaker Pro ( $9) get the Trim function. This cost more than expected, primarily due to the software needed.

I consider the Ableconn IIDE-mSATA adapter an elegant solution to providing longevity to an old,still useful and I will say it, a beloved PC.

PS: After a day of heavy use I had another recurrence with the slowdown at startup and was going to revert to the HDD, left it to do the next day. When I sat down to revert to the HDD, just to check, I pressed power and the 700m booted up immediately and ran with no problems. I'm not sure what the problem was but recall an old item I read online: letting a PC with an SDD 'idle' before shutdown, say after Windows logoff, so it can reorganize itself. (Finnicky little devils aren't they?) Also my battery is only good for an hour + so the 700m is usually plugged in, which might get power to the mSATA before the OS is up. Either way, I am satisfied with the Ableconn, it did the job.

Curtis S.
5.0 out of 5 stars [M.2 SATA 2.5" RAID] Great little RAID controller if you need it!
Reviewed in the United States on 30 June 2020
Size Name: SATA (2.5" Drive)Colour Name: Dual M.2 SATA SSD (RAID)Verified Purchase
I gave away one of my Thinkpads, which had two 42mm M.2 SATA III SSDs and one 2.5" SATA III SSD which were used on my Linux system for a btrfs raid1 filesystem. I gave the machine to someone who isn't quite so tech savvy, so I pulled the two M.2 drives because I assumed this person wouldn't know what to do with them anyway.

Well I also didn't have another machine with M.2 SATA interfaces (at least none that weren't also filled already), so I bought this to still be able to get use out of those drives in a 2.5" form factor. So far I am quite pleased!

My intent was to simply wipe the drives and let it start fresh as a RAID0 array. Thankfully this controller wipes the drives automatically when in RAID0 or (maybe?) JBOD modes. So I guess if you're planning on using the SATA port multiplier other setting that doesn't wipe the drives, be sure you have the jumpers in the right positions to prevent it from automatically zeroing out the disks.

Right now I just have it in an external enclosure, so it's not quite getting the stress test it could. But I haven't had any issues with it so far, and it seems to be plenty performant. The 2242 M.2 SATA drives aren't terribly fast anyway, but the raid0 does seem to ensure a little more consistent performance (though again, I'm not running the machine off of this).

I doubt I'll ever need to buy one of these again, but since I just happened to be in a situation where this would be beneficial I decided to give it a try. I'm surprised with how satisfied I am with this product.