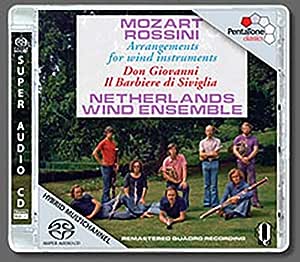 D. Beardslee
5.0 out of 5 stars Mozart Opera Arias rendered instrumentally, incomparable!
1 November 2018 - Published on Amazon.com
Verified Purchase
Always one of my favorite recordings since its first appearance on vinyl, the Netherlands Winds Ensemble delivers the greatest hits of Mozart and Rossini in the most accessible and seductive way. I have no complaint with the vocal recordings of these great compositions, but this recording allows the listener to go directly to Mozart's genius as a melody creator without equal. Prepare to be totally overcome with the glory of these tunes!
Read more

J Scott Morrison
5.0 out of 5 stars 'Don Giovanni' and 'Barber of Seville' for Winds
9 April 2011 - Published on Amazon.com
Back in the latter part of the eighteenth and early part of the nineteenth century wind ensemble arrangements of popular classics were fairly common, at least partly because noble establishments often maintained their own ensembles for the entertainment of their masters and guests. The most famous of these groups was the 'Imperial Wind Band', founded by Emperor Josef II in Vienna in 1782. The groups were referred to generically as 'Harmonien' and the genre as 'Harmoniemusik'. Not surprisingly popular operas were fair game for Harmonie arrangers. On this CD we have the Netherlands Wind Ensemble, a group made up of principal players in various Dutch symphony orchestras, playing arrangements of thirteen excerpts from Mozart's 'Don Giovanni' and seven from Rossini's 'Barber of Seville'. The arrangers, almost completely forgotten today, were J. G. Triebensee (Mozart) and Wenzel Sedlak (Rossini).

We hear arrangements of most of the operas' famous arias and ensembles as arranged for either eight (Mozart) or eleven (Rossini) instruments. Such things as 'Notte giorno faticar', 'Là ci darem la mano', 'Fin ch'han dal vino', and both finales from 'Don Giovanni', and the wonderful Overture, 'La calunnia', and 'Largo al factotum' from 'Il barbiere' are great fun. I owned these performances on LP back in the 1970s when these performances were originally issued and they were wonderful companions. I'm thrilled to have them back on CD. And I transferred them to my iPod with dispatch.

This issue was originally in the then-new quadraphonic format, but also issued on plain vanilla stereo LPs. In this reincarnation it is a hybrid SACD. I honestly don't think the sound quality is that much improved in SACD, but it's plenty good in either SACD or regular stereo. This is light-hearted music guaranteed to lighten one's heart in performances that probably won't be bettered.


Read more
10 people found this helpful
Go to Amazon.com to see all 3 reviews 5.0 out of 5 stars