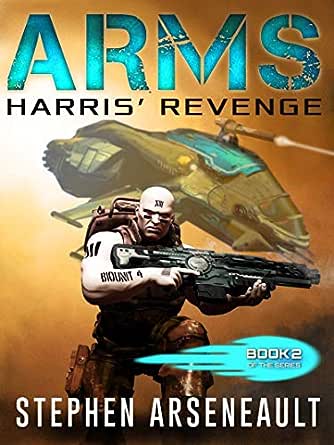 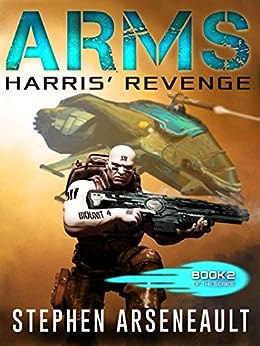 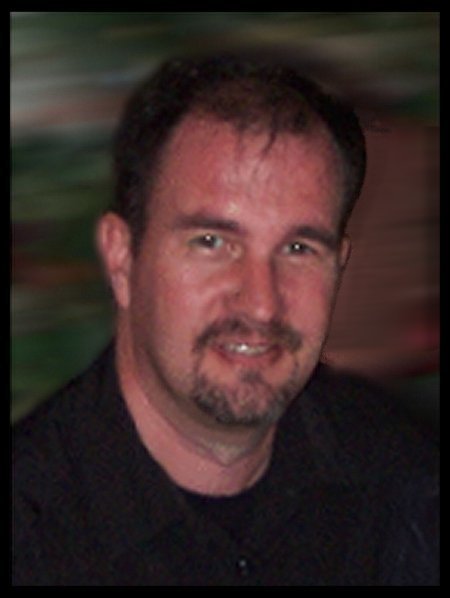 Revenge is a dish best served up from the business end of a railgun. Baxter Rumford's actions warrant vengeance. With Harris and Tawn being undercover operatives, every effort will be made to hit Bax where it hurts, in the purse. Meanwhile, attempts must be made to free Eden from the grips of the Earthers.

Harris' Revenge is the second book of this epic adventure. If you have yet to begin reading this series you will want to begin with the first book--ARMS War For Eden. Get cracking today!

What are readers saying about this series?
--Arms is highly entertaining, humorous, and fast paced--
--Each page finds you hurrying to get to the next--
--BZ, BZ, BZ, Stephen! Can't wait for the next one, as a former Navy Sniper, I can identify with some of the main characters situations...--
--Everything from Stephen Arseneault is excellent!!!!!!!!!!! Best sci-fi writer to come along in decades!!--

I reside in Central Florida with the wife and two daughters. After thirty years in engineering, my time is now spent chronicling the adventures of fictitious heroes. They are off-world, fighting the good fight, keeping Man alive. For some it was meant to be their calling. For others... not so much. All however are willing to fight until the end. Flip open one of my books. Tag along as unlikely heroes try to conquer the galaxy or save all humanity. Get aboard as you're either with us or against us. This may be your ticket out of here... at least for a short while. Hope you have a great day!
click to open popover

J. Sierra
4.0 out of 5 stars An excellent effort and worthy read
12 December 2016 - Published on Amazon.com
Verified Purchase
So... I'm not convinced that this particular book is *quite* four stars. It suffers from much of the same that all of Arsenault's books suffer from to some extent: they're all kind of the same, characters are kind of two dimensional, and their dialogue is a little... Off.

Now, let me talk about why I gave it four stars. Arsenault's writing has improved by what seems like 1000% from his first few series. He's fleshing out characters and giving them character, and you can really tell he's pushing his limits and exploring the art. That is exciting in a relatively unknown author because you can really see the development, and this series is, without a doubt, a great leap forward in that regard. It's entertaining and has a story that consists of more than "step forward, obstacle, step back, regroup, charge forward and overcome." Mostly, anyway.

I enjoy Arsenault's books, even the early work despite its rough edges. I buy them and will continue to do so because they have gotten progressively better. If you're new to this author, I encourage you to read some of his earlier series to gain some perspective, but this is a great effort from an author that I'm confident I will be proud to give 5 stars to. Definitely worth picking up.

George Monnat Jr
5.0 out of 5 stars Another Great Series by Stephen Arseneault
6 July 2017 - Published on Amazon.com
Verified Purchase
The first Stephen Arseneault books I read were the HADRON series, which I loved. After HADRON, I was afraid I was going to be let down by ARMS, but I love ARMS at least as much as HADRON - maybe even a little more. Stephen Arseneault writes with the perfect ratio of humor to drama and is a master at escalating to evermore challenging antagonists while maintaining believe-ability and suspense. In ARMS, he's created another multi-novel story that has kept me entertained and enraptured.
Read more
2 people found this helpful

Nana
4.0 out of 5 stars ARMS Harris' Revenge
22 November 2017 - Published on Amazon.com
Verified Purchase
The continuing story of the two engineered soldiers and the two young mechanical genius's who put together more spacecraft to stop the takeover of Eden. This story continues to be filled with fast paced action and tons of technology that has the reader wondering if he might just know something. I love the mechanical dog ( real name is Archibald) who gives them access to an ancient A1 intelligence. No more spoiler alerts.
Read more
One person found this helpful

W K.
5.0 out of 5 stars Arms book #2, excellent
19 January 2019 - Published on Amazon.com
Verified Purchase
This series moves along well. I'd love to see this as a television series. Looking forward to reading #3 next. Great work.
Read more
One person found this helpful

Gary Hunt
4.0 out of 5 stars So far the tale holds up
7 January 2017 - Published on Amazon.com
Verified Purchase
The tale is good enough to continue. Something for everyone in this one has the team bumbles their way to a victory!
Read more
2 people found this helpful
Go to Amazon.com to see all 20 reviews 4.8 out of 5 stars
Get FREE delivery with Amazon Prime
Prime members enjoy FREE Delivery and exclusive access to movies, TV shows, music, Kindle e-books, Twitch Prime, and more.
> Get Started
Back to top
Get to Know Us
Make Money with Us
Let Us Help You
And don't forget:
© 1996-2020, Amazon.com, Inc. or its affiliates